When I was in the fifth grade, I can remember making drawings of cold fronts meeting warm fronts for our science classes. They were just colored pencil sketches that copied depictions from my science textbook. That’s what passed for interactive when I went to school. If you don’t remember, different kind of air masses are heavier or lighter, and weather happens when air masses with different properties meet. What if, instead of pencil and paper, there were a way for kids to play with the properties of the air and see how it changed weather in a scene?

That’s the promise of the new app from Brooklyn’s Tinybop, which makes educational toys for iOS. Its newest is Weather, and it will let kids play with the atmospheric properties and see what happens in a little piece of a virtual world.

“We really wanted to nail down very specific scientific lessons about what happens in weather,” Tinybop’s Sarah Jacoby told the Observer. “Mostly that boiled down to the cycle, and the elements that make that up, the sun, moisture and air (and a little bit of pressure).”

Tinybop’s first app was The Human Body, in which kids can, for example, direct an animated mosquito to sting a virtual human and then see what happens beneath the skin. Weather will be its ninth educational app. The company’s founder, Raul Gutierrez, has previously said that the company’s apps are toys, not games: “There is nothing to win, only things to do.” He used one of its earlier apps to make this time lapse video of New York’s recent blizzard, as the Observer previously reported.

Ms. Jacoby was the production designer on the Weather team. “The fun part was showing little whimsical effects,” she said. For example, much of the action in the app comes back to this one scene of a little house, and the way it looks under different conditions. There’s a little dog that hangs out beside the house. When the user makes it cold the dog gets a sweater. When it gets hot, the dog starts panting.

A big emphasis for this app was to give kids things they could touch, move and create related changes in the app’s world. “There’s a moment in which you can go into a cloud and make either a raindrop or a snowflake,” Ms. Jacoby said. “That was one of the first prototypes we made.” The idea at that point was to help them think in terms of interactive elements. “We just wanted to do something that looked and felt really nice.”

Not everything in weather can be seen, which is tough when the company takes the strictly visual approach. “Wind was a really interesting one because it’s technically challenging to show something that’s invisible,” she said. They looked at a lot of really abstract wind models online but eventually came back to more down-to-earth ways of showing wind in the app’s little world.

They did make one concession to abstraction, though. The view can be backed up, so there’s a more macro view, and then with another gesture it shows where the hot air is moving in a scene. That helps to make that connection between air temperature differences and the weather people experience.

Kids can also zoom way in, on certain scenes. The app lets them see what air molecules are doing at different temperatures. So if they zoom into that level when it’s cold, the molecules move slowly. When it’s hot, they move fast.

Curious young explorer’s will be able to zoom to their hearts content when Weather goes on sale in the iOS store on February 25. 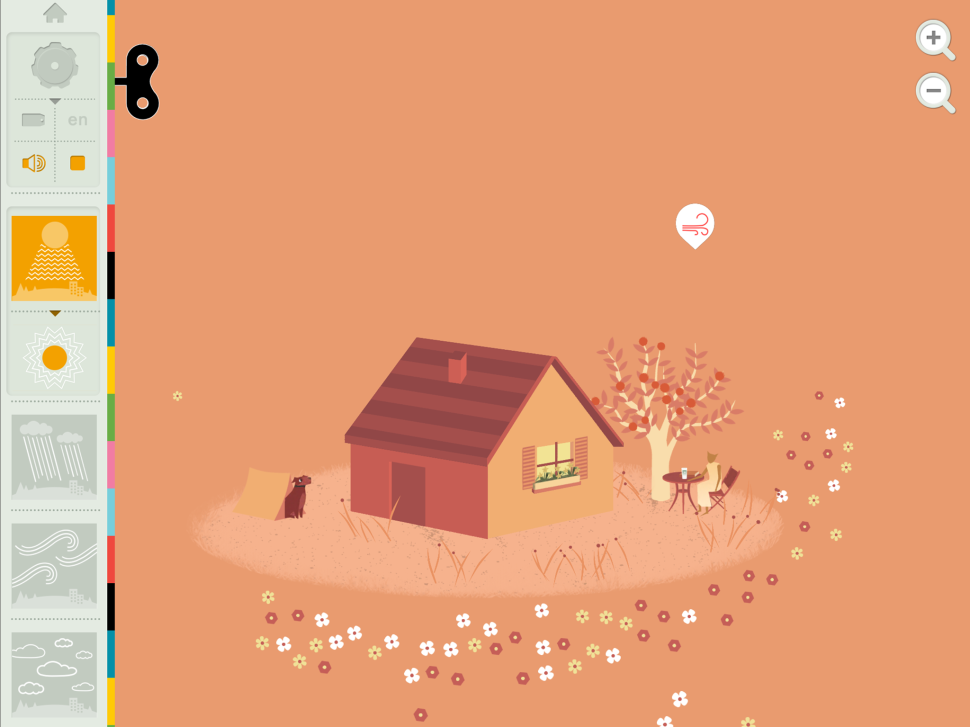