For a very tall out-of-towner who was knocking on the front doors of strangers, Mayor Bill de Blasio kept a pretty low profile in Iowa this weekend.

There was no triumphant reunion with his former boss and the current Democratic frontrunner for president, Hillary Clinton. There was no speech in a bar or a coffee shop to amp up a group of gung-ho progressives. There was just the mayor and his wife, knocking on doors to preach the gospel of Hillary and ask whether potential caucus-goers had accepted her as their nominee. Sometimes, according to reports from Iowa, the doors were closed before Mr. de Blasio could even reveal his day-job: mayor of a city with a 8.4 million people and an $80 billion-plus budget.

“It’s not something you see every day, but he’s happy to do it,” said Marti Adams Baker, the mayor’s deputy communications director who was with him in Iowa—using vacation time and paying her own way. “And I can tell you he’s having a wonderful time out here.”

The mayor of New York City doing what is essentially campaign grunt work—for someone else’s campaign, in another state—is certainly not something you see every day. Or really ever.

“To my knowledge, there’s never been a mayor who has stumped outside the city for another candidate. Obviously John Lindsay ran in ’72, and he was running for himself,” said George Arzt, a consultant and former spokesman for the late Mayor Ed Koch, who went on to note that Mr. Lindsay’s presidential run was “a disaster.”

When Mr. de Blasio first announced his plans to head to Iowa, plenty of people suspected that he would be standing beside Ms. Clinton on a stage. But the two will not cross paths during Mr. de Blasio’s visit, nor will he deliver a speech in her absence as a surrogate.

And so, the theories about the trip abounded. There was, of course, one reason you might not expect a higher profile for Mr. de Blasio: he waited months to endorse Ms. Clinton, whose Senate campaign he ran in 2000. Plenty of people wondered if the mayor was doing penance. Instead of saying 25 Hail Marys, knock on 100 doors. In Iowa. In the cold.

“It could have something to do with de Blasio’s extremely slow embrace of the Clinton candidacy, wanting always to ‘see more,’ I believe was the language he was using,” Mr. Birdsell said. “This might be, to a certain extent, a trip to the woodshed.”

Mr. de Blasio seems to have bad luck with Iowa. He planned to hold a presidential forum there, but had to cancel because no candidates would commit to going. He was criticized for giving speeches there earlier last year. The tone of the press coverage of his current trip is best summed up by the wood of the Daily News: “Corn Stalker,” it screamed, portraying Mr. de Blasio lurking in a cornfield behind Ms. Clinton.

“Some Democratic activists might have a sense of who he is, but my guess is that most people don’t know of him at all,” Mr. Goldford said in an email.  “He doesn’t (yet?) have the profile that [Rudy] Giuliani had nationwide for so long.”

But Ms. Adams Baker says that Mr. de Blasio was bringing his campaign skills to the table.

“He’s a very skilled organizer and campaigner,” she said. “He really loves going door to door, engaging with people.”

The whole thing seemed to get sadder for Mr. de Blasio when the New York Times reported—citing Mr. de Blasio himself—that his first offer to come to Iowa for Ms. Clinton had been rebuffed, and then he offered a second time to come not as a surrogate but to help get out the vote. But Ms. Adams Baker framed it differently: Mr. de Blasio “said he wanted to help and he’s doing exactly what they needed help with.”

“He doesn’t want to be in a coffee shop just telling people why he supports her,” she said. “He wants to be getting people out to the caucus tonight.”

And that touches on another possible explanation for Mr. de Blasio’s trip to the Hawkeye State: Mr. de Blasio really likes politics. Mr. Arzt recalled their time working together on campaigns—for the Clintons, of course—in 1992 and 2000.

“He does like his politics. But he’s extremely personable and he really likes to campaign out there,” Mr. Arzt said, before meandering back to what seemed to be missing from the trip. “I think that maybe a factor—and obviously his miscalculation with delaying his support for Hillary. But all in all, all he needed to make this a success would be an embrace from Hillary. And that didn’t come.”

It’s hard to imagine that a political operative like Mr. de Blasio or his advisors would not have considered that the press—especially the city’s tabloids, but even its more stodgy broadsheets—might portray his humble trip as an attempt to make amends, or as Ms. Clinton snubbing him.

But perhaps Mr. de Blasio didn’t really care, and the operative in him who had been in Iowa to volunteer in 2004 and 2008 just wanted to return for a long weekend with his wife. Maybe the siren call of the first contest in the nation was too strong to resist.

“This is a weekend that he loves,” Ms. Adams Baker said. 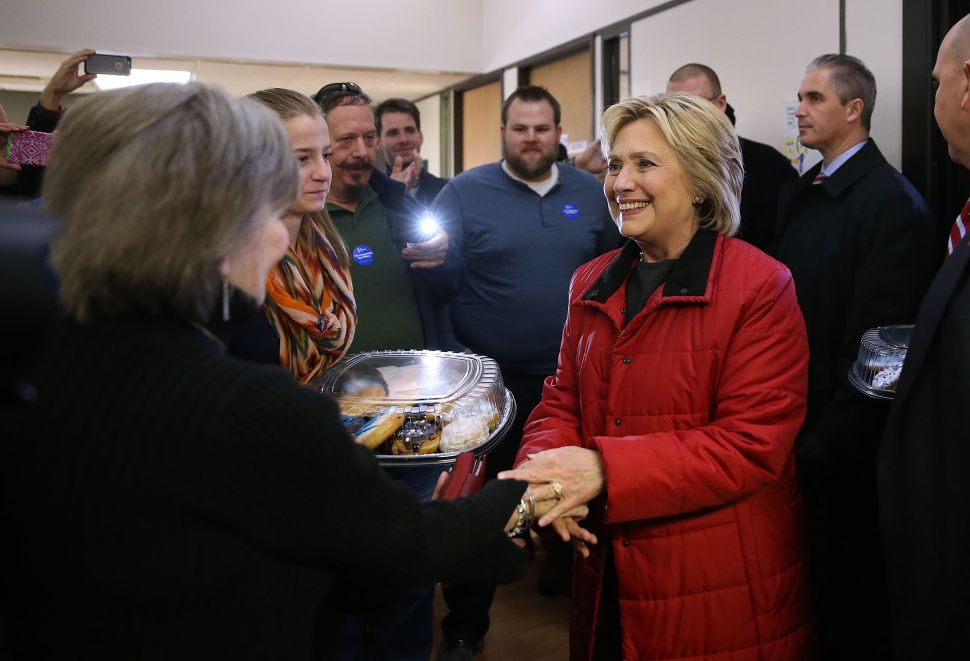