COLUMBIA, S.C.—No matter your political persuasion, Jeb Bush could be a nostalgia-inducing candidate.

He was humble in that patrician way politicians of an earlier, sepia-toned era seemed to be, fighting desperately to take the high road in an apoplectic primary season rewarding style, and insults, over substance. He celebrated his faith, his family and “servant” leadership as Donald Trump, belittling him at every turn, made a mockery of the idea that Republican voters would actually want a wonk with a heart, someone who could call immigration an “act of love.”

Yet if you’re a liberal American, one who trembles at the idea of Mr. Trump barreling his way to the Republican nomination, Mr. Bush’s decision to drop out of the race last night should give you a reason to smile.

It marked the demise of a doctrinaire conservative who was far less moderate than his branding would suggest. On virtually every issue, from same-sex marriage to monetary policy, Mr. Bush clung to the right, pledging allegiance to an orthodoxy in ascendance during the eight years George W. Bush was president. The younger Mr. Bush was a proud hawk, championing a bolstering of the military and intervention abroad whenever possible, acting in the neoconservative tradition that saw America as a well-armed force for good in the world, even if the occasional disaster, like Iraq, was the outcome. Unlike Mr. Trump, who made opposing the Iraq War a key talking point while storming to victory in South Carolina, Mr. Bush is a full-throated neoconservative who stocked his campaign with many of the same advisers who guided his brother’s presidency.

On fiscal policy, Mr. Bush was as conservative as any candidate in the Republican primary. An anti-populist, the former Florida governor celebrated the trimming of entitlement programs, bragging about how he fought a Medicaid expansion in the Sunshine State. His poverty-reduction plan came straight from the conservative think tanks Mr. Trump has little use for: he wanted to end food stamps and chop up a centralized, federal welfare system into state block grants. He was a Paul Ryan, Eric Cantor Republican, a person who saw bloat and corruption in the New Deal policies progressives still hope to burnish and revive. Mr. Bush believed encouraging marriage, rather than more government programs, was the way to reduce poverty.

While labor unions and some urban Democrats rage against charter schools, and call for public schools to be better funded, Mr. Bush was a shining star in the education reform movement, introducing a vouchers system in Florida and overseeing the rapid growth of the publicly-funded, privately-operated schools. The education debate has not been at the forefront of the GOP primary, which was to Mr. Bush’s detriment. Had it been, he would have had a lot to say.

In the one area where Mr. Bush seemed to move left, immigration, he was still in step with his party’s elite. Reince Priebus, the chairman of the Republican National Committee, had argued after Mitt Romney’s 2012 loss that the party needed to embrace immigrants as a way to win general elections in the future. The logic was sound. Mr. Bush’s multiculturalism and his ability to speak perfect Spanish in multiple dialects seemed at one point like a ticket to winning over Democrats—if he ever fought his way to the general election, as some predicted.

But it turned out Mr. Priebus, and Mr. Bush, badly misread the Republican electorate. For GOP elites, embracing immigration reform made sense because, in the long run, it’s probably good for business, in addition to being seen as humane. Organized labor, at least in the last decade, was uneasy about an immigration reform bill because of fears that guest workers could drive down the wages of American workers. This critique of immigration reform has disappeared from the left as winning over Latinos becomes a top priority, but it’s only increased on the right.

Mr. Bush’s exit does not necessarily mean traditional conservatism is dead or falling out of vogue. Much can change over the next nine months. Rather, for liberals, it’s a day to toast the end of a once formidable foot solider of the right. 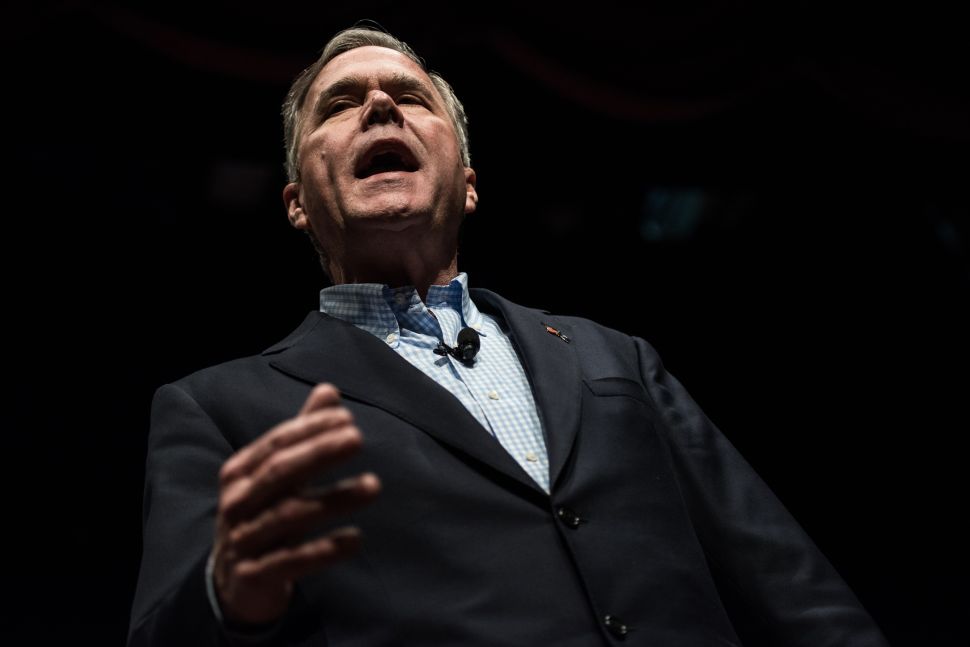