Civil servants in Gaza have gone out on strike. For a change, this strike has nothing to do with Israel. On the contrary, 50,000 Gazan workers are striking against Hamas.

In Gaza, striking involves more than parading with placards and not doing your work. In Gaza, strikes and protests are dangerous acts. People who protest in the Hamas-controlled territory tend to disappear. But this time, these workers are taking a firm stand by telling the leaders of Gaza that it is time for them to truly lead.

Public workers in Gaza have not been paid regularly since 2014. Their claim is that they have only received 40 percent of their regular salaries.

Schools and courts are closed. Governmental bureaucrats are staying home. Medical facilities (except emergency care) are shuttered. Sanitation workers are letting garbage pile up. Every worker who receives a salary from the government is taking part in the strike (except for public security employees; they have been receiving their full salaries).

In June of 2014 a unity agreement was signed between Hamas and the Palestinian Authority. The agreement stipulated that a technocratic unity government would be put in place. That never happened.

Perhaps the world is weary of what happens in Gaza. Certainly there are other, sexier, gorier, altercations and civil wars being waged. Or maybe the world is only interested when Israel is involved.

Instead, the sometimes violent conflict between Hamas and Fatah, the ruling faction of the Palestinian Authority, has continued.  They battle over policies and politics and, when words do not suffice, they murder each other. And no one, other than the people of Gaza, seems to care. The world deems the violence taking place between Fatah and Hamas as infighting. The civil service workers of Gaza want to change that.

Salaries are important, surely, but this strike was called in order to regain international attention.

The strike was coordinated to coincide with Palestinian unity talks between Hamas and the PA that were taking place in Doha. But other than a few Arabic news websites, the story barely made a bleep. Even while striking, the workers of Gaza have struck out.

We are told that the 2014 agreement spoke about solving issues regarding workers’ rights. But the total deal was never made public. What we do know is that Hamas says that it is the responsibility of the PA—the Palestinian Authority says that is not so.

Hamas ousted Fatah and the PA from Gaza in a bloody coup in 2007. The fighting was brutal. There were public murders. Entire Gazan families and family leaders, people who had been part of the Gaza elite for decades were publicly humiliated and forced to flee.

Following the coup, Hamas replaced the entire civil service branch, which had numbered 70,000 people, with 50,000 of their own replacements. The Palestinian Authority continued to pay the original employees even though they were removed from their jobs and many had relocated to the West Bank. The pay was intermittent, but they were still paid.

The 2014 the unity agreement stipulated that the PA would hire and pay Hamas workers “according to need.” The essential point in the agreement was that Hamas would return all PA employees to their former positions. This never happened.

Perhaps the world is weary of what happens in Gaza, after all, it’s been going on, almost unchanged, for so long. Certainly there are other, sexier, gorier, altercations and civil wars being waged.

Or maybe the world is only interested when Israel is involved.

Look for yourselves. A quick Google search of “government strike in Gaza” brings results about the last strike in 2014. And Googling “strike in Gaza” or “Gaza strike” only brings up matches of military and terror attacks.

Monies coming in to Gaza go into their military infrastructure. Gaza’s leaders are rebuilding their tunnels and training their terrorists. Unless there is direct supervision of the money and the materials they are receiving, Hamas is not going to sidestep ideology and begin using it to rebuild their society. They might say that the tunnels are being rebuilt for security and defense, not for warring against Israel, but those statements echo as hollow as their promise to work alongside the PA to rebuild their society.

As much as some people would like to blame Israel for the horrors that are taking place in Gaza, this strike proves the point: responsibility lies squarely with Hamas. Even the civil servants of Gaza know that Hamas is not interested in building a society—Hamas is taking the money and they are using it to prepare for war against Israel.

The world had better start paying attention to Hamas again. 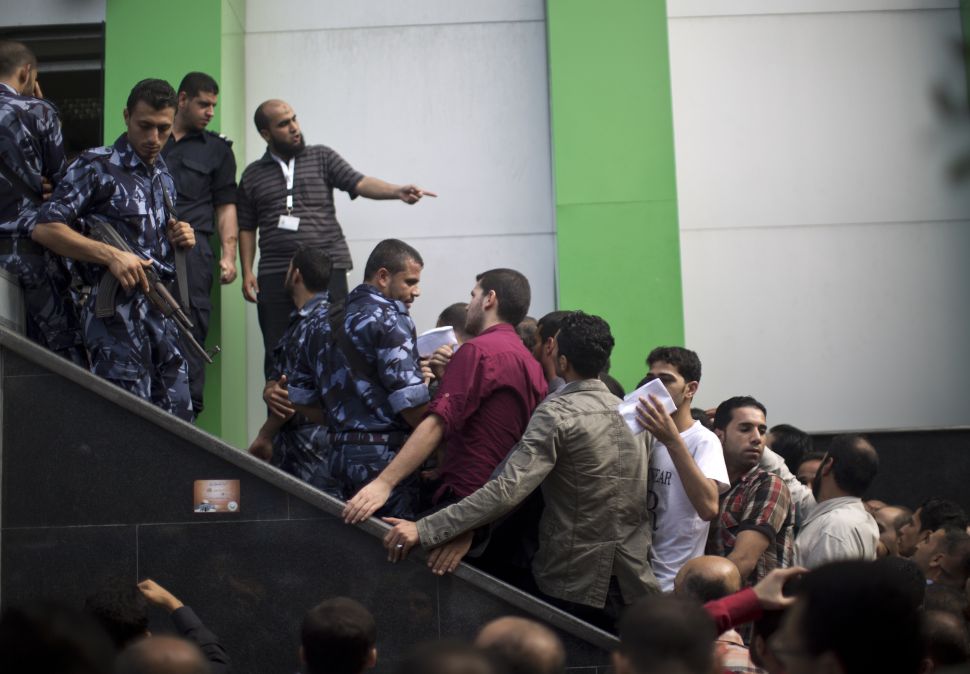