Vinnie: Let’s talk about how these two guys’ dicks are going to literally destroy the universe.

If it’s one thing 11.22.63 harps on constantly–besides how James Franco’s charm transcends time, space, and social norms of the 1960s–it’s that time is this super fragile thing, and if you interfere with its natural course it’ll give you cancer or make you shit your pants. Sometimes both. Sometimes both AND you incidentally become the inspiration for 1998’s Halloweentown, and then by snowball effect Halloweentowns 2, 3, and 4: Return to Halloweentown.

The point being, Jake knows this. Bill, despite being interchangeable with a block of wood wearing a tank top in terms of usefulness, also knows this. Sooooo naturally, the safest course of action is to A) Try and fuck Lee Harvey Oswald’s wife, or B) seduce, sleep with, sort of break up, and then confess your love in a speech oddly reminiscent of the “I’m just a boy” quote from Notting Hill to a divorcee whose ex-husband puts a clothespin on his dick because…well we don’t really know but as a general rule of thumb I NEVER mess with dudes who put clothespins on their dicks, for any reason. Especially if that dude is capable of nimbly sneaking into my bedroom to leave an envelope on my bedside table without waking me up.

Drew: Okay, I DO want to point out that there were a couple great moments in this otherwise lumpy episode, which seems to be taking us through time-travel IN REAL TIME, which is somehow super boring.

I’m not even sure what makes this scene so great. Is it the amount of cursing that Jake does, which seems to veer arbitrarily from “2016 mild-mannered teacher” to “Martin Scorsese character?” Is it the way that Franco seems to be commenting not just on this guy, but ALL shady men in ALL Stephen King books? (I swear to god: in Stephen King’s universe, all men walk around with clothespins on their dicks, all the time.) Is it this guy’s reaction face? I don’t know! But it was super cathartic; like watching someone who is very familiar with King’s works step into his universe, which is really the ultimate fan experience.

3) I totally called Jake using The Godfather for his cover story, and when I asked Vinnie if I got a prize for guessing a plot point, he just told me “You get the same prize the show gets,” which is the psychic equivalent of putting a clothespin on my figurative dingus (or whatever aphorism they use on this show.)

4) Jake’s mild confusion why Sadie is even that worked up about the clothespin situation. Honestly, when she’s building up the suspense of her wedding night and talking about “screaming” when she touches her husband’s crotch, you see Jake brace himself for something BIG. And then it’s just “clothespin on dingus” trope, and Jake is like “Oh, okay. Yeah, that’s not that big of a thing.” I imagine him taking Sadie back to present day and showing her just one Paul Giamatti human toilet scene from Billions and her just losing her (figurative) shit.

Vinnie: Jake mistaking the work of a creepy dude with a clothespin firmly attached to his crotch for CIA interference provided my dose of 11.22.63-brand comedy I so crave weekly. I really enjoy how fast Jake jumps to conclusions. Mysterious Envelope + some vague planning on an audio tape + a building filled with prostitutes that’s TOTALLY also a super-secret government meeting place with the password candy bar = CIA. No doubt about it. Jake even summed it up perfectly:

“George is the gun, Lee is the bullet, the CIA is pulling the trigger. So I’m… the holster? To like put the gun in? Yeah, Bill, so  that makes you…like a weird 1960s bow and arrow? Or a crossbow! Like Daryl on The Walking Dead? Oh man, Bill, you’re going to fucking love The Walking Dead.”

Drew: Well, this show has a problem keeping its vaguely threatening forces straight. Is it HISTORY that sent that envelope to the hotel, because history doesn’t like to be changed? Or is it the C.I.A.? Or the F.B.I.? Or an angry ex-husband with a clothespin on his dingus and an axe to grind? Or is it a SUPER conspiracy that somehow loops together all three shadowy organizations like the Evil League of Evil?

Look, Jakes comes from THE FUTURE, where truthers are considered pretty fringe, yet apparently in the two years he’s spent in the past–even KNOWING what we currently know about the limitations of government organizations to execute a planned attack like this– has turned him into a crazy conspiracy theorist. That above speech makes NO sense. And what’s the takeaway? That even if Oswald had been recruited by the C.I.A. to take down Walker, he had gone rogue on Kennedy?

Cool! Then the result should still be the same: take out Oswald! This doesn’t need to be needlessly complicated, Jake! It’s not Chinatown! Use your machine gun arm!

Vinnie: Jake casually inventing the song “I Saw Her Standing There” draws attention to all the ways Jake could have financed this adventure without getting a full-time teaching job in bumfuck Texas hours away from Dallas. Like, I don’t know, print out the sheet music to Sgt. Peppers before you go through the time hole and use the two years you spent NOT learning Russian banging out the chords to “When I’m 64” three years before that song even exists.

Drew: Also, what terrible excuses Jake has for this stuff. “Oh, the Beatles are my imaginary friends.” Haha, perfect lie, A+. Why not just say “They are a band from the future?” or, better yet, the v. cool 2016 negging comment used by all guys on dates who talk about music:“Oh, you’ve probably never heard of them.”

Jake’s inability to come up with plausible lies after years in the past is, to me, the least believable part of this show. He’s had forever to come up with a cover story, but yet talking to Miss Mimi, you can literally see the wheels grinding in his head as he veryyyyy slowly comes rehashes the plot of a v. famous movie. One which, by the way, involves a crime syndicate that was up and running in the 1950s. It’s kind of a face-palm moment when Jake realizes that he not only has to spell out what the witness protection agency is, but the mafia as well. At that point, why not just tell her you are a time traveler? It seems easier to swallow then “Okay, so it’s a bunch of Italian guys in New York from different families, and SOME of them want to allow drugs into their organized crime syndicate, but OTHERS don’t. And then there’s Fredo….”

Vinnie: All I took away from Jake using the plot from The Godfather as cover is a fun game called “Future Book Plots I Would Use As An Alibi If I Was A Time-Traveler.” For example:

Drew: Also, I know it’s a small town and all, but since when does Jake have to answer to Miss Mimi? I mean, this is the ONE TIME where it’d be okay to use the 1960’s Southern racism card. She doesn’t call the shots, white man! You do. WHITE MAN!

Vinnie: Speaking of Russians and banging (I think I mentioned those words…five points ago?), Lee and Marina Oswald. Is there really a benefit to NOT stopping Lee Harvey Oswald beating his wife, besides the “no interfering” rule that Jake has broken roughly 112,263 time already? At this point the CIA theory is out the window, and Lee Harvey Oswald couldn’t be more obviously the killer if he posted “My Plans to Kill The President” signs in his front window. Worse case, you break in wearing a fish bowl on your head and say some crazy shit like “I’m from the future stop beating your wife and definitely don’t kill any presidents!”

Do you know how much that would scare someone from 1963???

Drew: Vinnie, at this point I think it’s best if we stop asking why Jake just doesn’t tell everyone he’s from the future. It’s a small town. However, why he doesn’t tell everyone he knows their secret clothespin dingus trick, or is from the C.I.A., or the F.B.I., is harder to fathom. He interferes ALL THE TIME! His arbitrary rules about when NOT to interfere are honestly the most baffling part of the show. He’s allowed to use his future skillz on every part of the narrative except the one he’s been sent back in time to correct? Has he never seen 12 Monkeys? Is that even possible in 2016; if not the Terry Gilliam film than the terrible SyFy adaptation?

Last thought on Jake’s terrible lying: it does seem like a leap when Sadie finds his treasure trove of Russian lovemaking noises that her first question is “WHO ARE YOU?” Really, Sadie? I mean, it’s better than running out of there screaming, like you did to your last husband, but Jake could easily explain this. “I’m Jake, your boyfriend, and I’m learning Russian!” I mean, it’d be a lie, because he’s NOT learning Russian, not one word of it (“Thank god they’re speaking in English!” is the hilarious M.V.P. line of the episode), but it holds . You wonder if Sadie isn’t going to find out about Jake’s bordello run and just scream “WHERE AM I?” or something equally absurd. Having weird listening devices in your home doesn’t change the question of “Who are you” just, like “What’s your deal, man?”

Vinnie: Correct me if I’m wrong but was that Vincent Adultman from Bojack Horeseman sneaking around in the shadows at the end there? 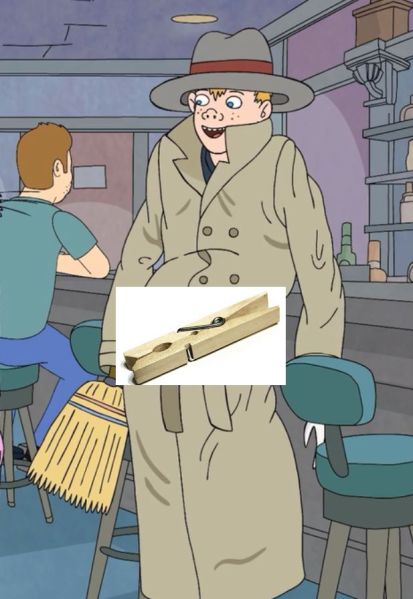 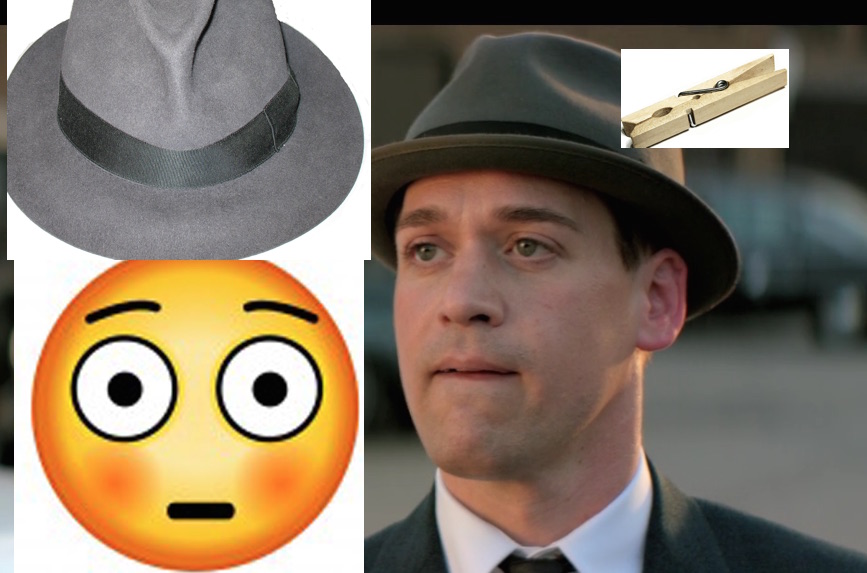