Vinnie: Well, Drew, looks like The New York Times was right. One of those millennials shows up to the job interview dressed like the ensemble from Book of Mormon, answers every question with “because I’m the king,” you put him in charge of your book depository and he goes and assassinates the president. Classic case. Now, as I attempt to write this while balancing on my hover board, I have to ask…hold on.

Sorry, I had to take three naps, update all 16 of my social profiles and craft a NYT Styles pitch (“What Happens When Baby Boomers Try and Work a Wireless Printer?”) and got distracted as my age bracket is known to do. As I was saying, I have to ask…which one of this week’s Franco Faces of Pure Disappointment was your favorite?

Was it the “FUCKING NO BILL WE CAN’T FUCKING FIX THE FUTURE BY LIVING FUCKING UNDERNEATH LEE HARVEY FUCKING OSWALD” face? 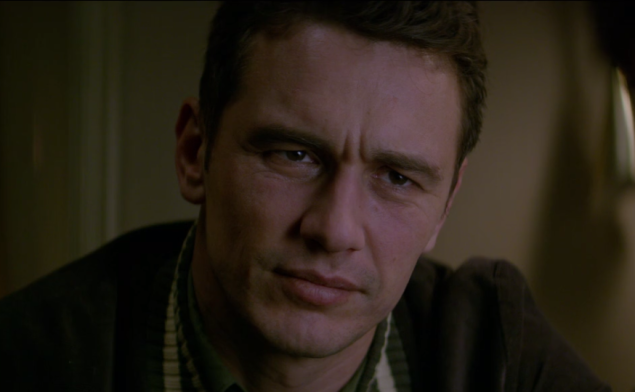 Or was it the “NO BILL STOP FUCKING MAKING OUT WITH LEE FUCKING HARVEY OSWALD’S FUCKING WIFE, GAWD” face? 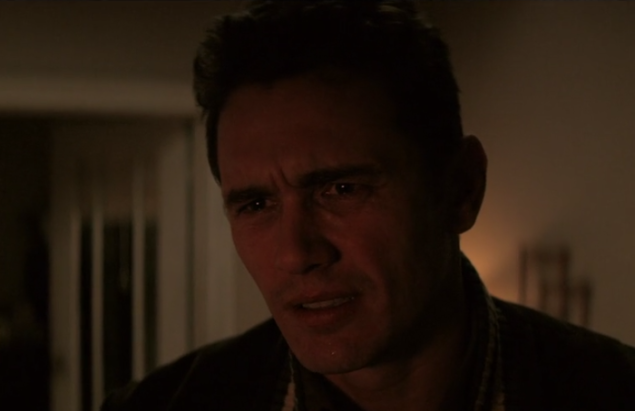 Because my favorite was the “WILL YOU FUCKING MARRY ME SADIE I PUT ON MY BEST FEDORA SPECIFICALLY FOR THIS OCCASION” face. 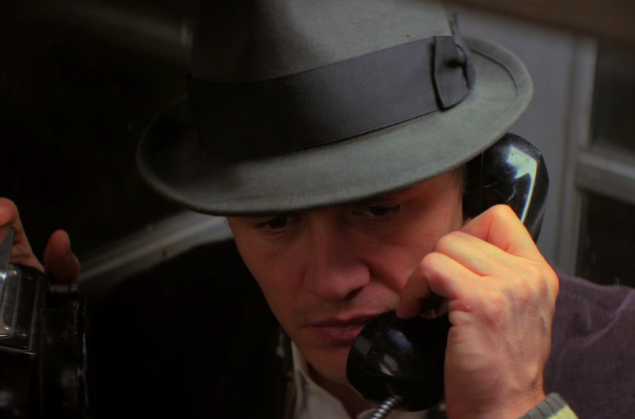 Drew: This was definitely one of those moments where you realize that James Franco may have aged out of the millennial mentality. Or at least, his characters have. Look at that fedora! That’s the hat of a serious man, not a Judd Apatow man-child. I’m sure in reality James Franco still acts like the guy who tried to live-vlog the Oscars while hosting, but honestly I think Dave Franco’s whole thing–from 21 Jump Street’s trope-defying popular kid Eric to the fact that he (and not you) gets to go to bone-town with Alison Brie every night–makes him the more quintessential millennial hero.

In fact, if you want to read into this week’s episode in a Pop Psych way, it’s actually about James Franco’s troubled relationship with his “brother” who has finally stopped emulating him and decided to be his own man. So what does Jake-James do? LOCK HIM IN A LOONEY BIN. This is the natural end result of those Acting Lessons videos!

You just have to wonder: is that what happened to the other other Franco brother, who was last heard from around 2012?

Vinnie: Gotta’ be pretty honest, this episode was mostly just annoying. I actually had to put on earmuffs to drown out the sound of this show grinding its wheels to justify Jake not killing Lee Harvey Oswald. Lee could sit on his front porch using his rifle to shoot at a target shaped like John F. Kennedy and Jake would be like “BUT HOW CAN WE BE SURE?”

Drew: You can actually feel Franco straining against having to explain this concept for the seventh week straight. “Ugh, it’s like…okay, if we mess with the past, then…I dunno, man! It just HAS to be this way! Because I said so!”

Logically, it does kind of make sense that Bill over time has become alienated from Jake, even IF he is a time-traveler. It’s so boring, getting lectured at all the time, and having to listen to weird Russian tapes and not have sex with the neighbor’s wife. I mean, that’d be hard for everyone, but Jake really treats Bill like his personal bitch.

Vinnie: With that said, hahahahahax10000 to Bill becoming best friends forever with Lee Harvey Oswald. I mean, if Jake isn’t going to kill him why NOT try and change the future as we know it through the power of friendship and birthday cake? Say what you will about Bill–and if it was me I’d say Bill is a literal dumb-dumb with no actual working brain–but at least he’s brainstorming over here. Sure, his thought process is 100 percent fueled by pregnant Russian boners, but really who here can’t say the same?

In fact, I’d even bet that left to his own devices Bill–who, I must repeat, I’m not entirely convinced isn’t actually a half-sentient scarecrow–could save the future faster and more efficiently than Jake. Jake can’t even show up uninvited to a birthday party without exposing his entire apartment-bug operation. Which is funny, because Jake is pissed about it but that same apartment-bug operation has, over the course of two years, produced nothing but tapes of Russian sex. And who could possibly enjoy listening to endless tapes of Russian sex? 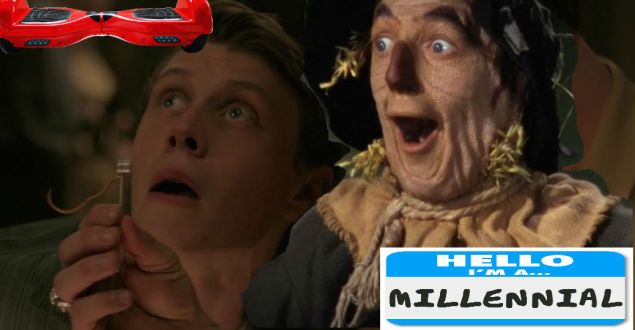 Vinnie: I wish one of the times Sadie asked Jake to tell her something about the future, Jake was like “Okay, there was this one time a super-handsome filmmaker and his doughy friend almost started a war with North Korea.”

And Sadie was like “no Jake, tell me something true.”

And then Sadie was like “Why backward?” Because apparently Sadie will accept a clothespin on your dick and time travel, but can’t fathom why a doctor would ask her to count backward.

Drew: Yeah, way to tell Sadie the most vague thing about the future with ZERO follow-up! “People walk around looking at their phones all the time.” I mean, if I were Sadie, my first question would be “Why?”

My second question would be: “How long are the extension cords in the future?”

My third question would be: “Well, that sounds like it could have been super useful; why didn’t you bring one back in time with you?”

And my FOURTH question would be, “You did WHAT with it?”

Vinnie: I will say that nothing brought me quite as much joy as watching Jake engage in quite possibly the worst foot chase I’ve ever seen put to film after those bookies showed up to kick his ass. Is Jake still wearing the diapers from episode 2? Why did he run like that? Can anyone give me a legitimate reason why this guy couldn’t catch Jake right here? 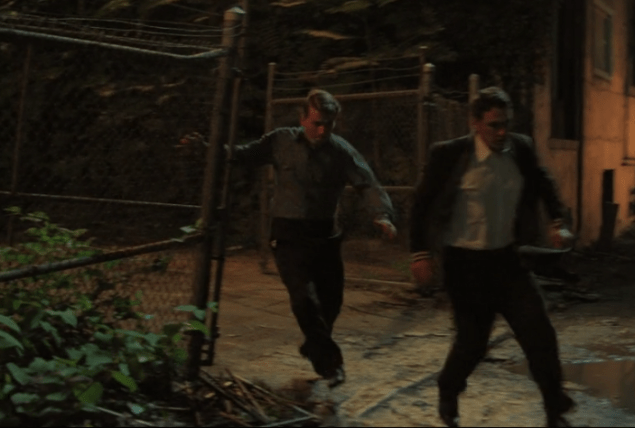 Just, like, reach out your hand, Nameless Thug #4! I mean, they eventually caught Jake and beat him into a coma so mission accomplished, but it’s the principle of the thing. This is what happens when you get a millennial to collect outgoing gambling debts.

I mean, now that Sadie ISN’T on a ton of morphine, she’s just swallowing Jake’s time-traveler story? Her scar has healed, so we know some time has passed–at least enough to make the subtext between the principal and Miss Mimi into a feel-good/ cancer subplot about transcending race relations– and yet Jake is still catching her up on what his plan is? Or is it just like Bill, where he feels the need to over-explain the Oswald conspiracy on a weekly basis, like some Groundhog’s Day-within-a-Back to the Future time travel paradox cluster-fuck?

Also, my final question* as Sadie would be, “Okay, but if you bring me to the future, what happens if I meet Old Me? Or does she not exist in that altered timeline. Sorry…has Ray Bradbury been invented yet? My head is about to fall off (from confusion. Not just the poor facial reconstruction surgery methods available to me in this era).”

*Not my final question.

Vinnie: This is the exact reason why I don’t write TV shows, but I’d find it so, so incredibly satisfying if Jake woke up from his coma on 11/23/63. First thing that happens when he wakes up is the doctor saying “You won’t BELIEVE what happened to the president yesterday.”

And even then, what’s worst case scenario? Jake takes Sadie back to the age of iPhones and froyo and either A) Tries to stop the assassination again B) convinces some other sad, goateed high school teacher to do it for him or C) Just leaves the whole situation alone.

Drew: I also like that sometimes the past is JUST like a Final Destination franchise. Except instead of Candy Man representing the specter of death, it’s just a hobo with a different hat than everyone else. 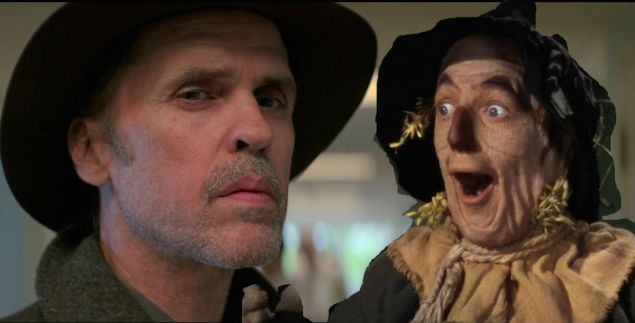 Vinnie: This is what happens when you let millennials run the boundaries between life and death.

But honestly, I think Option C is the best move at this point. I mean, yeah, A LOT of terrible shit happened between JFK getting assassinated and 2016, but we’re in a pretty alright place now, right? We’re not exactly living in The Hunger Games here. We have HBO and, I don’t know, Tinder, and pizza rat. Big claim time: Is saving JFK really going to get things much better than this? Have you WATCHED pizza rat? 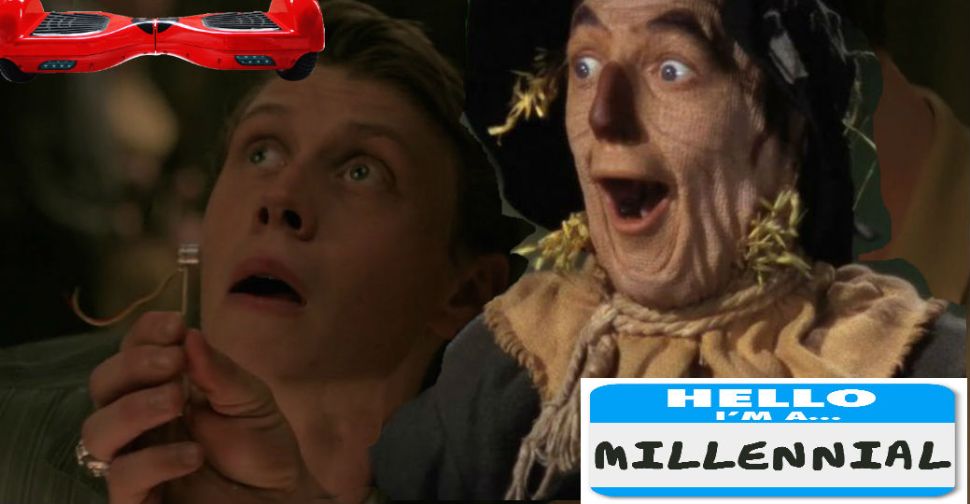