Gov. Chris Christie is notorious for his tough guy ways, but last night we got a look into his gentle soul.

The New Jersey governor and former Republican candidate for president introduced Donald Trump for his Super Tuesday victory speech. Gov. Christie stood in the background, and for several minutes, made a face that reeked of concern, regret and existential crisis. Obviously, Twitter had a field day and made some A+ jokes and memes regarding Gov. Christie’s endorsement, many suggesting that Donald Trump is holding him hostage. Here are 11 of the best:

Is mind control behind this endorsement?

Judging by the look on Gov. Christie’s face, he’s second guessing everything.

The big joke has been that he’s being held hostage by Donald Trump.

When you're trying to signal the extraction team but nothing's happening https://t.co/odrdEvQWcQ

These R.E.M. lyrics are appropriate.

Many memes also riffed on other situations where life hits you and forces this face.

When you realize you're sitting in the wrong uber but it's too late to say anything pic.twitter.com/bDmQh9Jxaz

When you didn’t get Beyonce OR Adele tickets pic.twitter.com/mp7Oy61jlW

That feeling when you realize Bruce Springsteen will never think you're cool. pic.twitter.com/cwMvIALsIT 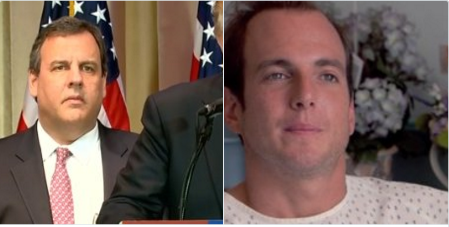