In the spirit of not wanting to pit Modern against Contemporary, or group show against solo show, the Observer has decided to select the six paintings at this year’s ADAA/The Art Show that stood out among the rest. It was tough deciding, as this year’s fair is truly better and more diverse than ever.

We saw brilliant solo booths by Contemporary artists like Barry Le Va, Marilyn Minter, Trenton Doyle Hancock and Carolee Schneemann, among others, and gorgeous paintings by art historical heavyweights like Pablo Picasso, Fairfield Porter, Milton Avery, Willem de Kooning, Donald Judd and Joan Miró. But the following works stood out thanks to their unusual perspectives, unique processes and, of course, their irresistible beauty. Look for them when you’re there, and who knows; maybe some of them are still available? 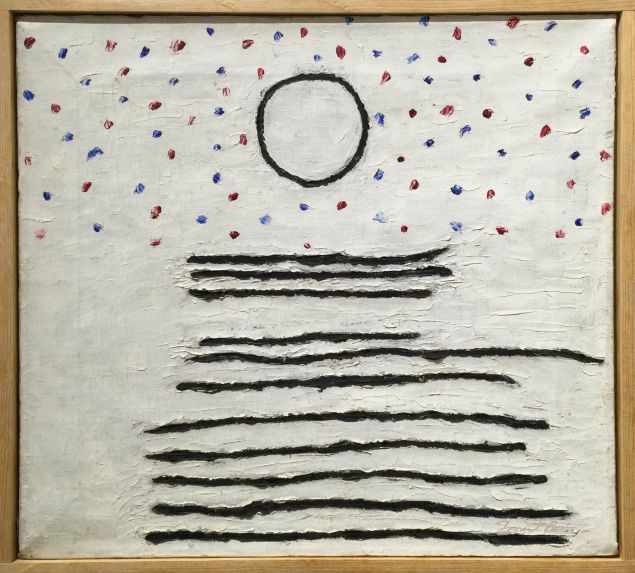 Forrest Bess, Untitled, No date
The first selection is one of Forrest Bess’s twisted Modernist symbologies, which can be found stealthily nestled in the back of Betty Cuningham’s knockout booth. The Texas-born visionary, who was championed by legendary NYC art dealer Betty Parsons, had some interesting theories on alchemy and hermaphroditic evolution—a worldview within which his crusty little abstractions only played a small part. And despite isolating himself in a small fishing shack in the tiny Texan town of Chinquapin, he remained extremely curious until the end of his life, having intense correspondences with figures such as renowned art critic Meyer Schapiro and sexologist John Money. This untitled and undated work by Bess looks like it was made with a trowel and a stick, yet it’s nevertheless one of the most delicate and complex abstractions in a hall filled with great Modernists. 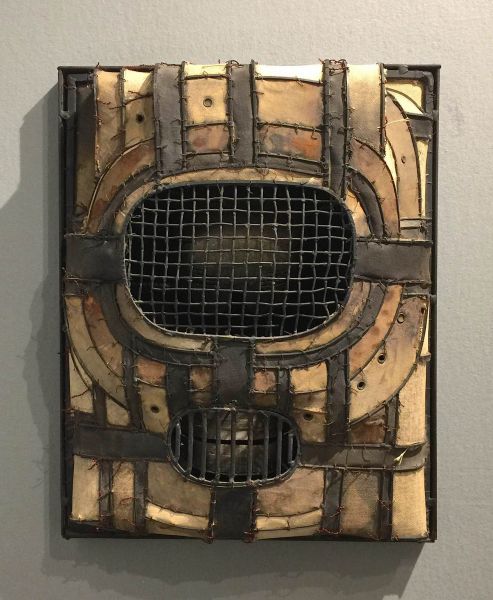 Lee Bontecou, Untitled, 1964
Ok, it’s not technically a painting, but this selection was a no-brainer, and it pretty much floored us as we rounded the corner of Acquavella’s power-packed booth. At only 25 x 16 inches, Untitled, 1964 is one of the tinier Lee Bontecou steel and wire constructions you’ll find, but it carries the psychological weight of a massive Rothko or Pollock. Half mollusk, half suit of armor, this cage-like tent of horrors instantly gives you the creeps, but you can’t take your eyes off of its seductive forms and patterns. And don’t forget, this was made in the early ’60s. “Nice sailboat painting, Jimmy… Nice steel death mask Lee!?!?” But this Rhode Island-born sculptor clearly wasn’t waiting around for a cotillion. She was one of the first female artists to weld in her work, and she was also famous for withdrawing from the art world completely, despite nearly unanimous critical success. Another beautiful freak—I’m starting to see a pattern here. 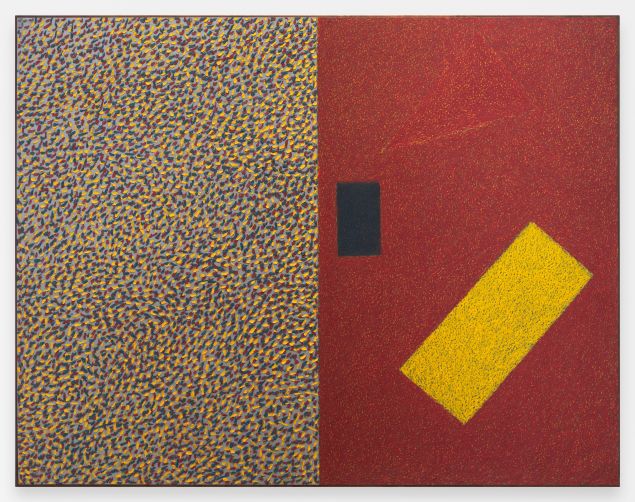 McArthur Binion, History: of: Application: One, 1978, Galerie Lelong
McArthur Binion paid tremendous dues to finally get the recognition he deserves, first with the great Chicago Gallery Kavi Gupta in 2013, and then with a powerful show of new work at Galerie Lelong last year. After an avalanche of critical acclaim, Lelong decided to feature Mr. Binion’s early abstractions from the 1970s at this year’s fair—a series that’s a gorgeous blend of unique marks and seductive surfaces. The effect mixes the religiosity of tantric or aboriginal paintings with the subtle inflections of work by international modernists from around the world, such as Brice Marden or Nasreen Mohamedi. Mr. Binion’s History: of: Application: One, 1978, is the best of the best here; a large oil stick and wax on aluminum work that hovers in the booth like an alien form. The interplay of adjacent graphic blobs of color combined with a highly unusual technique that gives certain areas of the painting a splotchy “melted wax” look makes Application: One a particularly hypnotic item that is sure to suck you in. 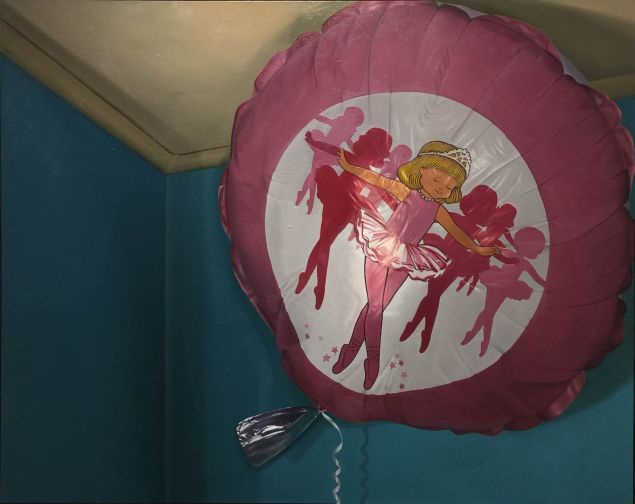 Catherine Murphy, Helium Balloon, 1992
One of the few painters that have managed to revive realist painting over the years, Catherine Murphy has been awfully influential to legions of young painters during her twenty years of teaching graduate painting at the esteemed Yale School of Art. Ms. Murphy is an artist who introduces abstract patterns into her realistic paintings of complex scenarios. In a typical Murphy, a simple cropped image of a lawn chair, for instance, becomes a crucifix, a color field painting and an idyllic Fragonard painting-in-a-painting, all in one. The oil painting “Helium Balloon” from 1992, which radiates from the back of the Peter Freeman Inc. booth, depicts a pink and metallic helium-filled balloon (emblazoned with cartoon ballet girls) that sits delicately at the top of a ceiling. The pink balloon, with its curling plastic ribbon and wrinkled face, is enjoyably rendered with breathtaking detail, yet its push-pull balance against a corner of robin’s egg blue wall offers a completely different sense of delight. It’s a powerful canvas, bursting with talent and energy, but only one lucky collector gets to take it home. 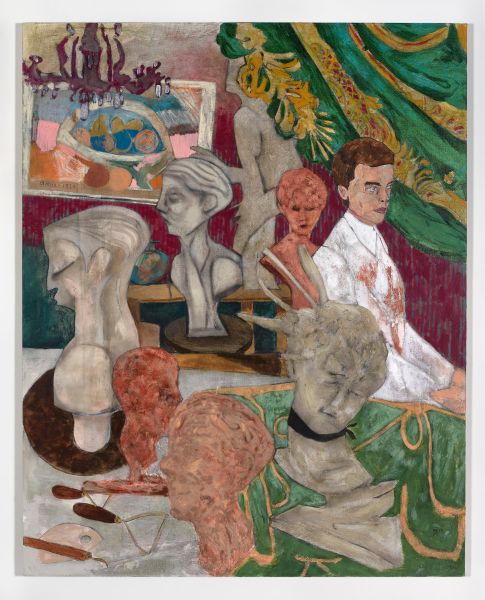 Hernan Bas, The imagined atelier of Bruno Hat, 2016, Lehmann Maupin
One artist that we’ve had our eyes on and who seems to have recently taken his craft to the next level is the 36-year-old Miami Native Hernan Bas, who has been painting “throwback” scenes of storybook artisan lifestyles for years. While his elaborately painted folding screen titled The Fourth of June (Eton) is the centerpiece of Lehmann Maupin’s fair booth, the real prize of this show is a five by four-foot painting titled The imagined atelier of Bruno Hat, 2016, which features an invented steely eyed young sculptor inside his decadent studio, encircled by a grouping of his sculptural busts. Bas’ work clearly borrows from early 20th century painters like Schiele and Matisse, but he somehow blends his slew of influences together into a singular pastiche style that’s all his own. Much like Ms. Murphy, Mr. Bas wins the day by balancing shapely compositions of bold color while simultaneously forging scrupulous details in his painting, as in the miniature brushstrokes in the still life painting within his painting, or the pungent smears of red clay layered upon this idealized artist’s work apron. Mr. Bas should be applauded for the unrelenting intensity he brings to his work, and Bruno Hat could be one of his greatest works to date. 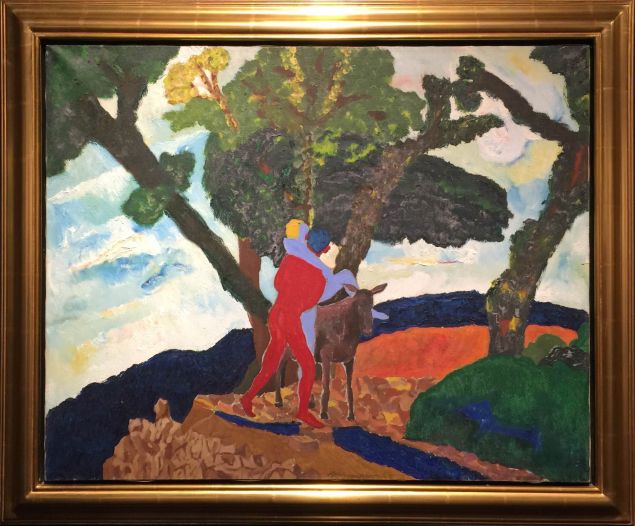 Bob Thompson, The Good Samaritan, 1965. Photo: Courtesy of Ryan Steadman and the Observer

Bob Thompson, The Good Samaritan, 1965, Donald Morris Gallery
Another art historical enigma, the late African-American painter Bob Thompson gets a tremendous spotlight at the fair with a solo booth, courtesy of the Michigan-based gallery Donald Morris. Thompson was a remarkable painter who appropriated religious paintings by old masters, transforming them into radiant studies of pure color and form. This painting, titled The Good Samaritan, was based on a parable told by Jesus in the Bible and was a popular theme in art, finding its way into the oeuvres of a variety of artists from Ingres to van Gogh. Though each work in this booth is magnificent in its own way, this painting stuck out as a masterpiece of twisting diagonals, intertwined brushstrokes and shifting planes. A budding painter could sit in this booth for weeks and glean a lifetime of learning from this master, whose life was tragically cut short because of a heroin overdose. But the 1,000 or so paintings he left us are a gift; go enjoy them. 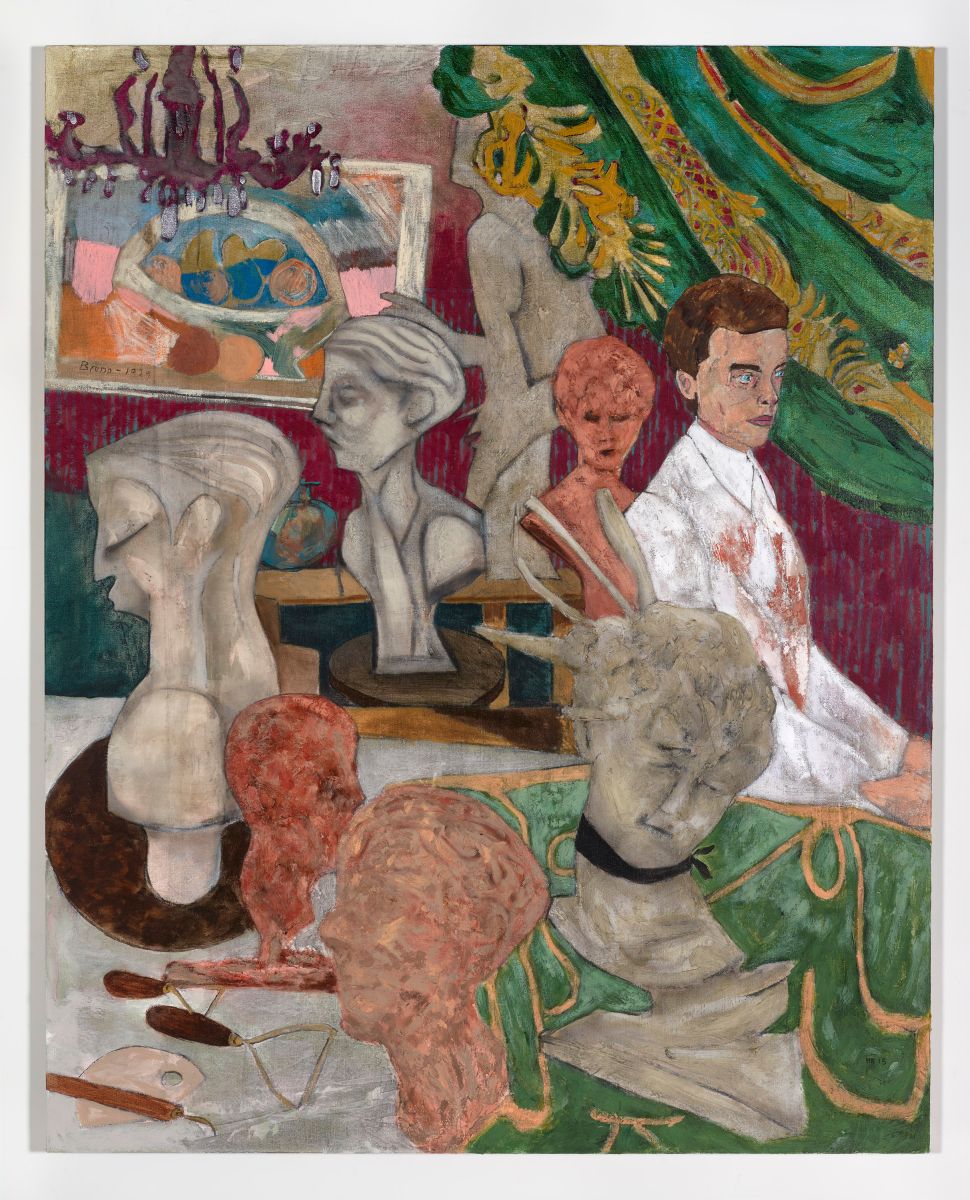