A drunken, deadbeat father is assigned the privilege of weekend visitation rights with his neglected but adoring 8-year-old son while his ex-wife and her new husband attend a Catholic retreat out of town. For the next two days, chaos ensues. Such is the good-natured but lightweight premise of The Confirmation. As the first full-length film by writer-director Bob Nelson, whose nuanced screenplay for Nebraska was Oscar-nominated, you can expect a similar sweetness of tone, enhanced by offbeat characters, underlying values and in this case two mesmerizing performances by Clive Owen and his astounding co-star, a remarkably adroit child actor named Jaeden Lieberher, who is going places fast.

In a departure from his usual rugged action roles, Clive Owen shows welcome versatility and no trace of a British accent as Walt, an alcoholic, out-of-work carpenter who wants to be a good father but is clueless about kids. His son Anthony (young Mr. Lieberher, who played Melissa McCarthy’s son in St. Vincent and also stars in this week’s other film Midnight Special) is such a good boy that in confession he can’t think of a single sin to share with the frustrated priest. As a child of divorce whose mom (the always marvelous Maria Bello) is remarried to a dull but responsible new husband (an unrecognizable Matthew Modine, replete with white hair and a moustache), Anthony overlooks his real dad’s many flaws and thinks he can do no wrong. Walt has a desperately needed new job that starts on Monday, but before he can even get his son home, his box of special, highly valued tools are stolen from his pickup truck while he stops off for a few slugs at a neighborhood pool hall. For the next two days, he tries to find the thief, get his toolbox back, and stay sober long enough to be a real father to the boy who loves him unconditionally. The weekend turns into something of a nightmare as Dad, struggling to be responsible, and his son, trying to be helpful, embark on a series of adventures both dangerous and funny. Not to mention contrived.

Arriving at last at Walt’s rented house hungry and exhausted, they find themselves locked out with an eviction notice on the door and forced to break into Anthony’s mom’s house through a transom for a place to sleep. Instead of Sunday mass, Dad drags the kid through the underworld to meet an gang of unsavory thieves and master criminals, get chased by a vicious dog and a thug with a gun, and steal the missing toolbox from a pawn shop, all in the name of fun—and all highly unlikely—while Anthony gets an education unlike anything he’s learned in preparation for his forthcoming first communion and confirmation a week away. The kid learns how to save his father from turning blue in alcohol withdrawal, finds his missing toolbox and saves the day in unsuspecting ways. Returning the favor, Dad repairs the brakes on his ex-wife’s car, learns how to play “Go Fish” before bedtime and, in the pre-dawn hours, accompanies the boy on his newspaper delivery route. In the interim, Bob Nelson manages to engage his characters in frank discussions of the superficiality of Sunday morning religious rituals, the generation gap and the importance of family values. By Monday, you end up with a smile in time for a happy ending.

All of which allows Clive Owen a lot of unfamiliar shifts in tone to play, and Jaeden Lieberher a chance to steal the movie with an uncommon sweetness and intelligence and a deadpan delivery far beyond his years. The Confirmation is a nice change of pace from most of the hateful violence we’re getting these days—inescapably inconsequential but ultimately endearing. 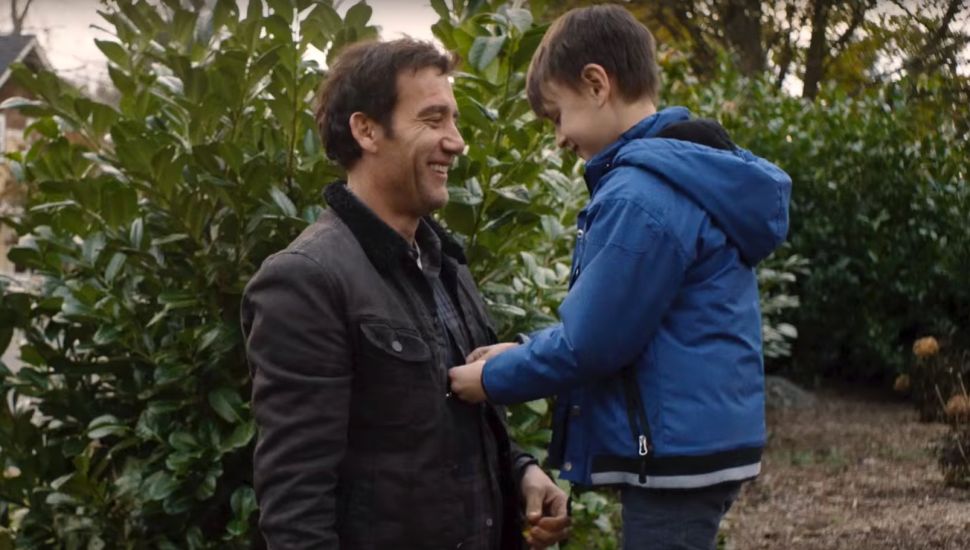