I’m not sure how boys on the wrong side of puberty deal these days, but for the rest of us, the crushing barrage of beautiful and impeccably styled women on Instagram, the Internet and newsstands, seems to have transformed what was once a collective voyeuristic pleasure into something closer to white noise.

That poses an interesting problem for the fashion world: How do you present someone like Christy Turlington to the world for the hundred-millionth time?

Fortunately, artists are never short of new ideas (ok maybe a few of them are) and they’re always eager to help out their fellow aesthetes. More and more, the fashion world has begun tapping artists for collaborative projects, and Harper’s Bazaar is leading this charge.

In March, the venerable fashion mag collaborated with postmodern icon Cindy Sherman on a guffaw-inducing series of fashion parody covers. Now, they’ve lured the preeminent 1980’s Neo-expressionist painter Francesco Clemente into portraying six generations of models—Anna Ewers, Liya Kebede, Christy Turlington, Linda Evangelista and Iman—in his trademark style for a 10-page spread in the April issue, and the Observer was given an exclusive look.

As you may or may not remember, Mr. Clemente was the art-muscle behind the 1998 film Great Expectations, a loose adaptation of the Dickens classic that starred Ethan Hawke and Gwyneth Paltrow and featured the Italian artist’s portraits of a young, doe-eyed Ms. Paltrow. That star turn and the resulting portraits left an indelible mark on Liya Kebede, a 38-year-old Ethiopian model who sat for Mr. Clemente.

“I remember when I watched that movie, the portrait really touched me,” Ms. Kebede said in her interview with Harper’s BAZAAR Executive Director Laura Brown. “I don’t know why. Then to suddenly see my portrait done in the same way, it meant a lot to me.”

Though his portraits are desirable artifacts for the international elite, Mr. Clemente, who quickly found success in 1983 via the Mary Boone Gallery, first became known for his surreal, dreamlike compositions that push past societal mores and embrace the strange, scary and libidinous.

“Imagination is a function of the mind, which is somehow connected to those fundamental experiences we cannot live without,” said Mr. Clemente on the topic of his psychological work in a 2013 interview with Alex Bacon for the Brooklyn Rail. “So imagination is not an arbitrary activity; it’s a discipline that connects you to fundamental needs, forms, traditions, and gestures which are there and always will be.”

A subconscious subtext is likely what makes Mr. Clemente’s portraiture so unique, since, traditionally, portraiture has often been viewed as a somewhat shallow, vanity-based genre within painting.

It was particularly interesting for Ms. Turlington, 47,  to sit for Mr. Clemente, as she’d sat for him once before—20 years ago.

“We knew each other, but time makes such a difference,” she said, alluding to the fact that the two had been in touch since that first encounter. This familiarity, along with a stunning Valentino dress, was perhaps the reason why Ms. Turlington’s was one of the more radiant portraits in this group. “It has the feeling of Pontormo or Modigliani or Giacometti,” she said of the terracotta-toned artwork. “All portrait artists that I love.”

The concept for the shoot  originated from Ms. Brown, who was inspired by a 1967 image of the German model, actress and artist Veruschka posing next to a painting of herself in the same outfit she’s WHO? wearing. Ms. Brown had been a fan of Mr. Clemente’s work for years, and felt he would be a perfect fit for this unique fashion spread.

“I do think there is a more interesting way to present models than just photographs,” said Ms. Brown in an email to the Observer. “We do a number of artist collaborations in Bazaar, and it’s gratifying to produce such lasting images.”

The model portraits and accompanying interviews are tied to the issue’s theme of “fabulous at every age,” to which a cynic might say, “Oh really, supermodels? I’m sure you are.” But seeing the paintings—and the stories—of these women become more nuanced as they advance in age leads the reader to realize that something much more important than beauty is being measured here: life.

This hits home at the end of the piece, where you find Iman’s portrait alone—without it’s sitter.

“Sadly, due to the death of her husband, David Bowie, [Iman] was unable to complete the photo session,” it says next to the image of her statuesque portrait.

“Death is one of the unfortunate side effects of aging,” my long dead grandfather used to tell me, but years spent loving and being loved are what we exchange for our youth, and ironically, Clemente’s paintings of the world’s most beautiful women become a meditation on exactly this.

One can surely be beautiful at every age, but more importantly, every age of your life is a beautiful thing. Relish it. 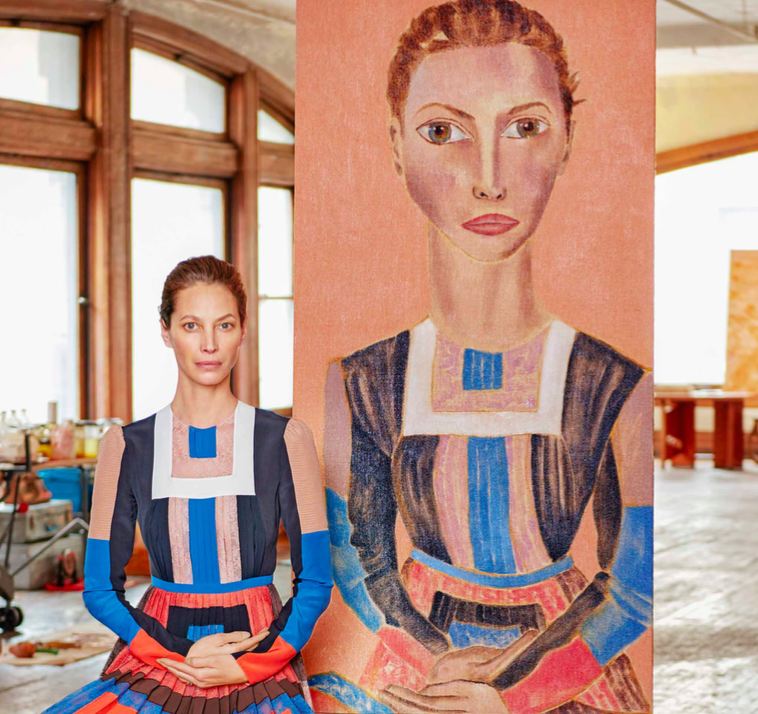