As a member of the legendary New York Dolls, he was the little cut-up with the big rock and roll heart. The nice-looking, frizzy-haired kid, legs stuffed into leopard-skin pants, feet jammed into platform boots, when they weren’t slippin’ and slidin’ in roller skates. Sometimes, he looked like he’d mug you. Other times he looked exactly like what he was: a nice Jewish boy from, well, Cairo. He is Sylvain Sylvain, née Mizrahi (no relation to Isaac). Ace songwriter, killer rhythm guitarist, formerly one of glam rock’s kookiest, most beloved characters. Now, he’s doing something truly outré. Like some outdated Yiddush stereotype, Mr. Mizrahi is in the rag trade. He’s making shmattes.

For those gentiles out there, it’s a Yiddish word that means “raggedy garment”…something that could be used to describe the New York Dolls’ entire fashion aesthetic. And Mr. Mizrahi isn’t just making your Bubbe’s shmattes either: he’s now designing cool shmattes. Not Rag and Bone so much as Rag and Rag. Newsboy caps, ladies hats, biker belts, motorcycle jackets, purses. He posts samples of his designs on the Facebook page for TRUTH and SOUL, each item giving off an indefinable aura of hipness. Mr. Mizrahi has gone from slaying them with his guitar to knocking them out with a sewing machine.

“If you know my history, man, you know I started out doing this,” said Mr. Mizrahi, who’s recently taken up residence in Nashville. While the proto-punk’s work may have taken root in the ’60s in Manhattan’s hippest shops, it had its origins halfway around the world, a decade earlier, under battle conditions. Some might even call it “Old Testament-esque.” But, you know, shorter.

“My dad couldn’t get work in Cairo, where we lived when I was a kid,” he said. “Mostly because of that Suez Canal deal, when Israel invaded and caused all that damage. Jews were really not wanted there. In any case, while we were there, my dad and his brother set up what was basically a tailor shop in the front room of our apartment. They made shirts and suits, custom stuff. My mother used to do the sewing. We had a Singer sewing machine that had a hand crank and I used to crank it.” This was Mr. Mizrahi’s first job; by the time he was 6, he was already old enough to be putting buttons on shirts.

The Mizrahis soon moved to Paris, then, helped by the American-Jewish community, they came to the States, landing in the decidedly unglamorous environs of upstate New York.

‘I thought, “Man, this is great. We’ll get this machine and we’ll be working!” The only hitch was it cost $600. I could buy a Cadillac for that!’

“They sent us a letter giving us the options of going to Cleveland, Detroit or Buffalo,” Mr. Mizrahi said, laughing ruefully. “My dad thought, ‘Buffalo? That can’t be too far from New York City, right?’ ”

By the late-’60s, Mr. Mizrahi and his family had journeyed from home to the not-so-distant land of Queens, and, finding himself installed at least near Manhattan, he set about making himself into a legend. This is where he met two other cats with whom his fortunes would soon be entwined: John Genzale, soon to be Johnny Thunders and Billy Murcia. Of no small importance was the fact that Mr. Murcia, who hailed from Colombia, shared Mr. Mizrahi’s outsider status. The three proto-hipsters, along with singer David Johansen and bassist Arthur Kane, would soon morph into one of the most important rock and roll bands of the ’70s.

But in the beginning, it was just these kids from Queens, sharing a love of cool threads. Especially Murcia and Mr. Mizrahi.

“Billy and I got started selling clothes in the Village. Then we discovered the PFAFF Sewing Machine shop on Fifth Avenue, where they also sold knitting machines,” Mr. Mizrahi recalls. The hand knitting, the rocking back and forth to make rows of stitches by hand…it’s not hard to see what appealed to Sylvain about the sewing machine, so reminiscent of his Cairo upbringing. The good old days. Before Buffalo.

Eventually the lady who owned the store, charmed by these hipster vagabonds, agreed to sell them the floor model for $300. She even threw in free lessons.

Sewing is in Mr. Mizrahi’s blood, and he was soon rhapsodizing about learning how to make sweaters.

“We didn’t have, say, three yarns of black,” he said, “so we mixed pink, black and purple, just to see what would happen. It made cool colors. I just bumped into it. That’s how I work today.”

Early on, Mr. Mizrahi discovered how to alter the “rib” for sweaters, doubling the number of rows in his own tailor-made outfits from the usual 30 to 65. “And girls went crazy for it!”

Mr. Mizrahi and Murcia started a company, first called Sacha Knits, later TRUTH and SOUL. Their first foray was selling clothes at Woodstock, a portentous beginning if there ever was one. But it’s when they returned to Manhattan that their funky fashion really began to fly off the shelves.

“At The Different Drummer or Paraphernalia, which were cool places on Lexington, they bought our clothes right away. Some stores had vision. But there were other stores that didn’t like hippie stuff. Those places were on Madison? They were all, ‘You better go down to Christopher Street with this crap.’ ”

Their loss: soon enough, Mr. Mizrahi’s input was being felt by his pals in The New York Dolls, who made their transvestite-hoodlum look emblematic of the ’70s, and would be copied by attendees of the Met Gala in 2013, the theme of which was “Punk: Chaos to Couture.” On display one could see the likes of Versace, Galliano for Christian Dior, Malcolm McLaren and Chanel. All of whom most certainly sell on Madison Avenue.

These days, Mr. Mizrahi is still designing and dressing fashionable hipsters…the only difference is now they are the kids of his former bandmates and fans.

“I’m doing all sorts of handmade clothes for folks who know my name or my look,” he said. His DIY aesthetic also has a personal touch. “If you put in an order for a hat or a jacket, as I’m cutting it, I will send you photographs of how it’s going. It seems more personal somehow and they like that.” Of course, that’s not discounting Mr. Mizrahi’s own personal theory: “They want to dress like me!”

The man takes a long, reflective pause. As if he’s looking at his arc from Egypt to France, from Queens to Nashville, Rock Star to sought-after clothing designer. Then? “Having something custom made for you,” the punk peacock-turned-tailor pauses. “Man, there’s nothing like it.” 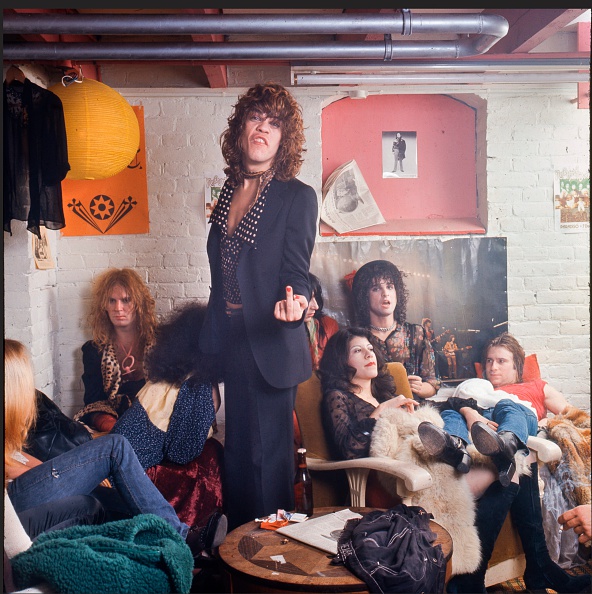