Police have a rough job everywhere, but it might have been worst in Northern Ireland when the violence there was a constant.

Crime writer Adrian McKinty released his fifth book about a cop in Carrickfergus, the author’s hometown which sits 11 miles north of Belfast, in the ’80s on Tuesday, Rain Dogs (Seventh Street Books). The Observer met with him at a cafe near his home to talk about the new tale, but really we wanted to talk about cops.

Right now, there’s a lot of animosity directed toward police in this country, but Mr. McKinty contends that police here have it easy compared to cops in the Ireland of his youth. “In the ’70s, at least they had the Protestants on their side,” Mr. McKinty said of Ireland’s so-called ‘peelers’ (what they call police in Ireland) during our interview. “Whereas by the ’80s, everyone hated the cops.”

Mr. McKinty’s new novel follows the mysterious death of a young reporter inside a completely locked, impenetrable medieval castle, a crime that should have been impossible. It’s the fifth one of his crime books that this reporter has read, though it is the first on the right side of the law.

‘My feeling is that readers are not idiots, that they have read books before and they are inventing the story in their own heads’

The book is very intentionally grounded in its times. Only a few scenes into the story, a high ranking police officer is killed by a car bomb, yet by that point, we’ve already watched Mr. Duffy check the bottom of his car for mercury switch bombs as a matter of routine several times. Nevertheless, this senior officer is soon killed by this crude technique of booby trapping a car.

“If you were a policeman, your life was very dangerous indeed,” he said, explaining that the Royal Ulster Constabulary was the world’s most dangerous police force to serve in during The Troubles, the conflict over whether or not Northern Ireland should leave the British empire. Yet, he added, “The biggest killer of policemen back then, even though 20 or 30 were being killed a year, was suicide.” As he put it, wives were always leaving, the liquor was always handy and every cop had a gun.

Rain Dogs ultimately comes down to solving a crime, but that backdrop of civil unrest is critical to his story. He presents his protagonist confronting the difficulty of his moment with gallows humor that must have been almost as essential to his work as his revolver.

Early in the book, Duffy’s girlfriend leaves him because he’s too old for her. As he protests, he chides her as a hypocrite, saying that if she hated cliches she wouldn’t dump an Irish cop.

“When I was a kid in primary school, everyone either became a policeman, civil service, a terrorist or they emigrated,” Mr. McKinty explained. He wanted to write about the kind of people he grew up with, so that left him with cops. “Crime fiction for me was the only genre that actually has working people in it.”

Mr. McKinty made his mark writing about a criminal, though. His Michael Forsythe trilogy (beginning with the infecting Dead I May Well Be) follows the fall and rise of an illegal immigrant from Belfast to New York who brings his bloody skills to organized crime here. Forsythe is one of those terrible characters readers root for, because his overall agenda is just, though he leaves a horrible trail of bodies behind him as he reaches his happily ever after.

The Forsythe books, then, are about the triumph of a criminal. The Duffy books are all about the defeat of a cop. Mr. Duffy always ends the cases with his answer, but that doesn’t mean his solutions ever do him any good. “It’s still interesting to tell a story where defeat is a major idea,” Mr. McKinty said. “That’s one of the things I wanted to do with Duffy. This is the fifth book and he hasn’t had a single successful prosecution.”

Which brings us back to the context of his story. “That’s also about the circumstances of Northern Ireland,” Mr. McKinty said. It was a world in which snitches paid a price. “I was talking to a policeman a few years ago, and he said they found out who did it in about 80 to 90 percent of murder cases, and they had about five to 10 percent that were successfully prosecuted.”

It’s something similar to the situation we have with police here in America today. In both cases, there are tensions across societal dividing lines, differences that have been exaggerated in people’s minds, and law enforcement, not always innocently standing in the gap of that tension, comes to earn distrust from both sides.

Mr. McKinty’s Northern Ireland is one where the societal differences were really much smaller and yet the tensions much higher. He told the story of checking out the 20th precinct here in New York City, just to see what it was like, and marveling at the fact that he could walk into the station and see the desk sergeant and all the other police officers milling about in front of him, as if it was nothing for a citizen just to walk inside.

Mr. McKinty said that in his home, still today, there’s an elaborate series of security checks just to get in. Then, he said, “You have to be physically patted down, and then you can go into the police station.” A station, he said, that’s surrounded by ten foot walls and twenty foot fences atop the walls, put there to repel grenades.

With Duffy, McKinty gives us a police officer to look at police work through, one that’s doing his job diligently (his superiors might say, much too much so), yet one who is also writhing under the fundamental constraints of being an officer of the law, in fighting for justice in a failed state tucked inside a fading empire.

To underscore that point just a bit more and make it slightly more real, the book brings in another historical figure, Jimmy Savile. He was a TV personality and fundraiser who was posthumously accused of sexual misconduct with children. This story has its own pedophilia subplot, which reaches back into the upper echelons of power in London. It reminds readers that the same state the police are meant to protect can also get in cops’ way.

At the end of the day, it’s a murder mystery, one whose plot goes international. That said, it’s impossible not to read it and think about how complicated it must be as one lone person on a great big force whose whole purpose is undermining violence yet whose key tools to fight it are wits and a bit of violence.

“My feeling is that readers are not idiots,” Mr. McKinty said, “that they have read books before and they are inventing the story in their own heads.”

It’s hard not to read about Sean Duffy’s own cases and trials and not feel a bit for the position police are put in (as well as the one they have put themselves in). At the end of the day, policing is just work, except it is work that has a way of starting with dead bodies and leaving more dead bodies yet. 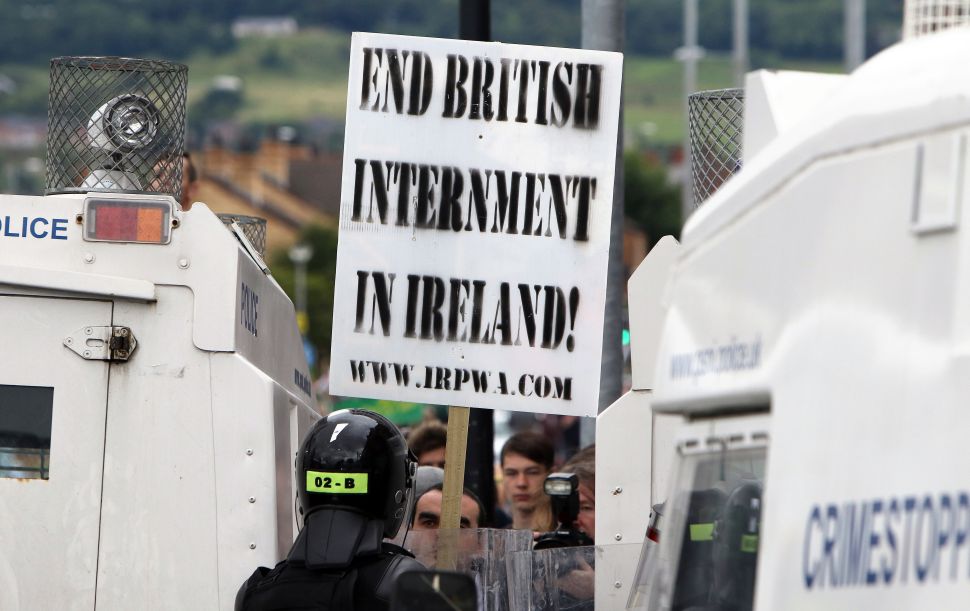