A week after a class-action lawsuit was filed against New York State to end the much talked-about “tampon tax”, advocates say ending the stigma around periods is the ultimate goal of their movement.

At a panel Thursday night held as part of NYU’s Women’s Herstory Month, speakers rejected the taboo around bringing the issue into public dialogue and discussed how menstrual equity can be made a priority for both lawmakers and society as a whole.

“Every woman that menstruates is a part of this movement, and a part of the challenges that we all face,” Council Member Julissa Ferreras-Copeland, who represents the 21st district in Queens and is also chair of the Council’s Committee on Finance, told the audience.

Last September, Ms. Ferreras-Copeland launched the nation’s first free dispenser of pads and tampons at a public high school—the High School for Arts & Business in Corona—to ensure that young women didn’t have to miss school or skip class just because they were on their periods. Many low-income women in her district face serious challenges in accessing these products, challenges that are only worsened by the shame associated with periods.

According to Ms. Ferreras-Copeland, when she first started talking to women in her community about the issue, many were put off by the idea of bringing it into a public forum.

The issue of menstrual equity has been a growing part of the national dialogue, with NPR even calling 2015 “The Year of the Period”.

Currently, New York is one of forty states that levels a sales tax on pads and tampons. The group behind the lawsuit filed last week argue the tax is indicative of a double standard between men and women and should be banned. Panelist and activist Jennifer Weiss-Wolf said yesterday that the tax also violates the state’s exemption on items that are considered a medical necessity—a definition that includes products like Rogaine and adult diapers.

If the lawsuit is successful, the tax will end. Furthermore, since it is a class-action suit, anyone who is a resident of New York state and has purchased pads or tampons in the past two years will be eligible to collect a reimbursement of their sales tax. Ms. Weiss-Wolf says each rebate will add up to maybe two dollars, but plans to arrange for women to collect and donate this money to help create more initiatives that would make feminine hygiene products more accessible.

“[The movement against] the sales tax is great, people pay attention, they get why it’s fair or not fair, but the goal here really is to create a norm of menstrual equity,” Ms. Weiss-Wolf said.

Ms. Ferreras-Copeland said presenting the issue as a norm has been part of her strategy when putting forward legislation. Through a legislative package she is introducing soon, Ms. Ferreras-Copeland hopes to make feminine hygiene products available in public schools across the city, along with homeless shelters and correctional facilities—but she doesn’t want this to be seen as a “special caveat” the City is instituting for women.

“No one asks, what’s the budget for toilet paper in the Department of Education?” she joked.

Panelist Kiran Gandhi, an activist and musician, said one of the main things she wants to see is more openness around the issue.

“What ends up happening is because we don’t talk about [menstruation] at a young age,” she said. “Everyone’s so awkward about it, so then we feel this body hatred.”

For Ms. Weiss-Wolf, talking about the issue itself has been empowering. “If [people] are uncomfortable, it’s their problem,” she said. “I just keep going.” 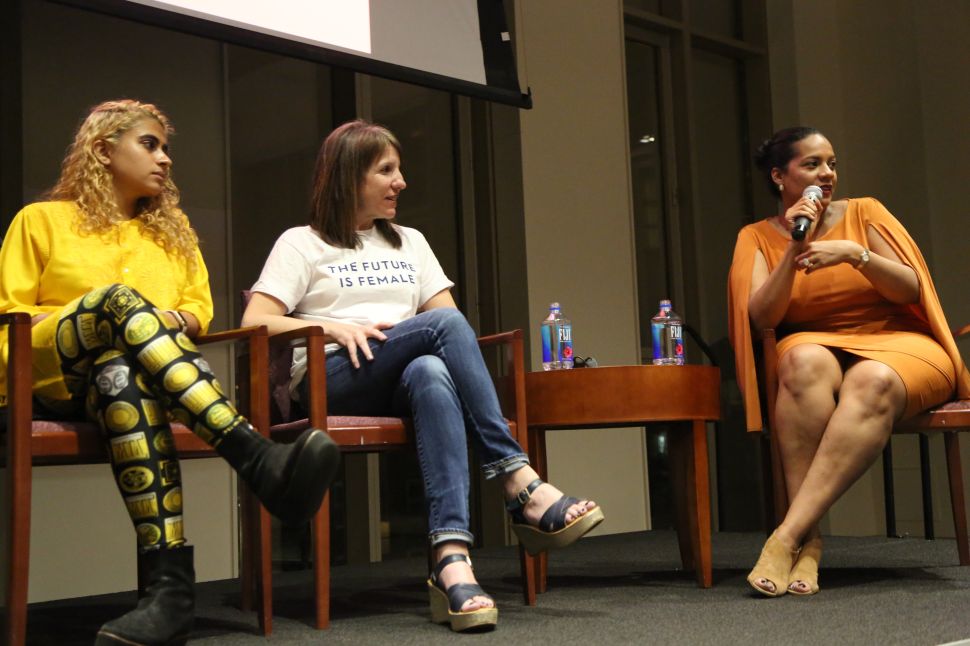