Formerly a chef at restaurants including Django and The River Café, Douglas Elliman broker Paul Zweben isn’t above sharpening his knives to lock down a listing.

For instance: A potential client familiar with his culinary background recently offered him an exclusive on the condition that the night before the apartment closed he cook for a dinner party at her house.

“I was like, ‘We have a deal,’ ” Mr. Zweben recalls. On the evening’s menu—a mixed green salad, a burrata appetizer, chicken with black olives and balsamic vinegar, and, of course, for dessert, a sweet, sweet commission check.

Listings are the lifeblood of an agent, and while they may, on certain lucky occasions, fall into one’s lap, they more typically require a bit of chasing down. Sometimes they require quite a lot of chasing down. And sometimes, well, sometimes you find yourself driving around a U-Haul overflowing with designer shoes and wondering what the hell just happened.

So it went for Citi Habitats agent Nathaniel Faust who, last year, managed to snag the listing for a high-end Columbus Circle condo, but only after promising to empty it of its contents and pay for storage during the sales process. This would have been a substantial undertaking in any case, but Mr. Faust had the particularly bad luck to have as his client a fashion designer with a hoarding problem.

“He had an enormous amount of clothes and shoes all over the apartment,” he says. “The closets were filled to capacity, and there were stacks of shoeboxes everywhere, clothing in their sink, in their microwave. You could barely walk around in the place.”

The designer’s wife had another agent she wanted to go with, Mr. Faust recalled. And so to win the deal, he agreed to move their things into storage and foot the bill.

It took Mr. Faust a full day and four or five truckloads to get the apartment to where it was ready to be shown and photographed, he says. After three months of showings and open houses, he finally had a deal in place. But when it fell apart at the last minute, the couple took the listing back and gave it to the broker the wife had preferred in the first place. That broker ultimately sold the place, but at a much lower price, Mr. Faust notes.

“Basically, I did it all for nothing,” he says. “So my feeling is sometimes it’s better, if someone wants to choose another broker, to just let them do it. That’s kind of the lesson that I learned.”

Joseph Brucculeri, a salesperson with Miron Properties, has a similar tale of a listing won, then lost, but with a happier ending. Coming across a Kips Bay one-bedroom listed by its owner for $525,000, he decided to stop by the open house, at which, it turned out, he was the only attendee.

After some discussion, the owner offered him a two-week exclusive to see if he could sell the apartment, and when, at the end of the two weeks, Mr. Brucculeri had managed to get five offers on the place, the owner extended the exclusive for another six weeks.

He got a contract out on the apartment shortly thereafter, but the deal moved slowly, and when it was still in flux at the end of the six months the owner gave the listing to a new agent who, Mr. Brucculeri says, had promised a highly unrealistic $600,000 sales price for the place.

“That was nowhere near the market value,” he says. When this new agent failed to find a buyer, he got the exclusive back again and sold the apartment two weeks later for $487,500.

Pricing can be a delicate issue. You don’t want to overpromise, of course, but at the same time, convincing a seller their apartment isn’t worth everything they thought can take some doing. Particularly when that seller is a reclusive Russian billionaire.

Conducting discussions through the man’s intermediaries, they struggled to lower his expectations. “He would say, ‘I bought it for X and now you are telling me I can only sell it for Y. I don’t understand,’ ” Mr. Cox recalls. “And we would say, ‘Well, the market has shifted. This building has maybe peaked. And if you don’t get out now you are going to take an even bigger hit next year.’ “

The man explained that he needed his agent to “have some skin in the game.” To get the listing, he said, Mr. Morgan would have to write him a $7,000 check that he would cash and keep if the apartment hadn’t sold at the end of six months.

“He had two mortgages on the property. The carrying costs were astronomical,” he says. “We started meeting last summer when [the listing] was with another brokerage, and we were telling them, ‘You know, if you want us to take it over you need to let them go and bring us on as soon as possible.’ ”

Finally, in the second week of November, the seller’s representative came to them and told them the listing was theirs but that they would lose it if they didn’t sell and close on the apartment by the end of the year.

Typically, an apartment in that price range would take around four or five months to sell, says Mr. Giordano. “So it was kind of a Hail Mary.” They managed to close on the place right before New Year’s.

Communicating through intermediaries is typical when dealing with the super-rich and celebrities, says Engel & Völkers broker Leslie Hirsch. So she was surprised when she and her colleague Howard Morrel, vying for a listing owned by a famous R&B star, learned that the star wanted to meet the pair at their offices to, Ms. Hirsch says, “feel out our energy.”

“Normally when we are dealing with celebrity clients we deal with their managers, their agents, their financial people, not them in person,” Ms. Hirsch says. “But this particular person requested two hours in our office and asked that no one else be in the meeting. They basically just wanted to make sure that we understood where they were coming from, that they could trust us, that we were the right people for the job.”

And so the pair cleared the office to avoid any rubbernecking, stocked up on the celebrity’s favorite snacks (Fiji and raw unsalted nuts), and put their best vibes forward. The low-key approach worked. They won the $10 million listing.

Sometimes, though, something a little more aggressive is called for. Last year, Elliman broker Michael Graves learned through a friend about a Flatiron listing owned by a seller who was living in London.

Within 12 hours of hearing about it, Mr. Graves flew to London and met the man for a sales pitch at his private club. “I showed him my portfolio of sales in and around his building and won the listing,” he says. “He actually signed the exclusive with me there over coffee 14 hours after I first heard about it.”

The vetting process doesn’t typically move so quickly, though. Mr. Zweben and his wife Carolyn (also an Elliman broker) are currently selling an apartment they won only after the clients behaved like private investigators.

“It was a couple I met from doing previous sales in the building,” he says. “And they didn’t ask me for, say, three references, they asked me for 15 references. And after about a week of not speaking to them, I called them to see how they were doing, and they said, ‘We’re good. We’re about halfway through your references.’ I was like, ‘You’re calling all 15?’ And sure enough, they called all 15 different references.”

“It was excessive, but we got the listing, and we’re selling it,” Mr. Zweben says, adding that, in his opinion, no matter how extreme a potential client’s requests, “nothing is a waste of time.”

Citi Habitats’ Brian Morgan would probably quibble with that sentiment, though.

Two years ago he was referred to a seller who was looking to unload a pair of Financial District condos, but upon meeting the man, Mr. Morgan realized he had something of a character on his hands. For starters, he insisted on being involved in every part of the sales process, demanding, for instance, to be present at every open house. Additionally, Mr. Morgan says, the prices he wanted for the apartments “were nowhere near what the comps said they should be.”

Mr. Morgan accompanied the man on a tour of the apartments for an hour or so, listening as he “went into every little detail” about them. Then, the man sat him down and explained that he needed his agent to “have some skin in the game.” To get the listing, he said, Mr. Morgan would have to write him a $7,000 check that he would cash and keep if the apartment hadn’t sold at the end of six months.

“I’m like, ‘What the hell did I just waste an hour with this maniac for?’ ” 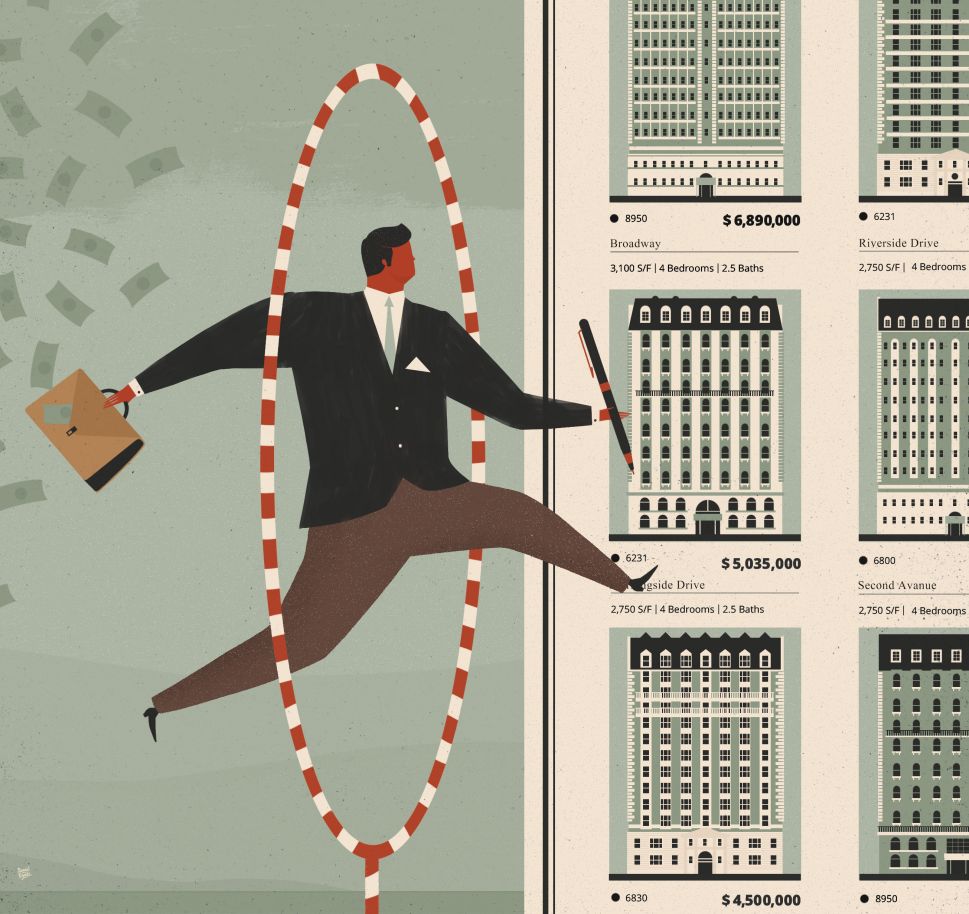