Mr. Gore joined Mr. Schneiderman and a contingent of attorneys general ranging from Vermont to the Virgin Islands at the Empire State pol’s Lower Manhattan office. The official occasion was a joint amicus brief the lawyers filed with the federal district court currently weighing the fate of President Barack Obama’s Clean Power Plan, which would set a national ceiling on carbon dioxide output—and which numerous states and power companies have sued to stop.

But the overarching theme of the press event was Mr. Schneiderman’s probe of Exxon Mobil to determine if they misled investors and the public about the environmental impact of burning fossil fuels.

“Years from now, this meeting by Attorney General Eric Schneiderman and his colleagues here today may be well be looked back upon as a real turning point,” the Inconvenient Truth narrator said. “Commercial interests that have been, according to the best available evidence, deceiving the American people, communicating in a fraudulent way, about the reality of the climate crisis and the dangers it poses.”

The overwhelming majority of scientists believe that the planet as a whole is getting hotter and that CO2 from cars and coal-burning power plants are the primary cause. But the issue has become increasingly politicized, with energy industry groups and Republican lawmakers arguing either that average temperatures are not rising or that human activity is not at fault.

Mr. Schneiderman has subpoenaed internal documents from Exxon Mobil dating back as far as 40 years, seeking to ascertain if the company knew of the negative impact of greenhouse gases, and if it knowingly propagated false information about those complications among shareholders and the populace at large. Exxon Mobil has denied any wrongdoing.

Mr. Gore compared the activities of Exxon Mobil and similar interests to the tobacco industry in the 1990s—which also faced prosecution from state attorneys general.

Since the actual brief filed today was such a minor point at the press conference, one reporter speculated Mr. Schneiderman was simply staging a “publicity stunt”—which he ardently denied. The prosecutor has made his name obtaining record-setting settlements from financial firms tied to the financial crisis, but he was vague on what resolution he and his colleagues would seek from offending energy companies.

“Financial damages alone may be insufficient,” he said, noting that some energy companies have already taken steps to raise offshore oil derricks to adjust for higher sea levels, and are drilling in areas once beneath Arctic glaciers, even as they disputed climate science. “The First Amendment does not give you the right to commit fraud.” 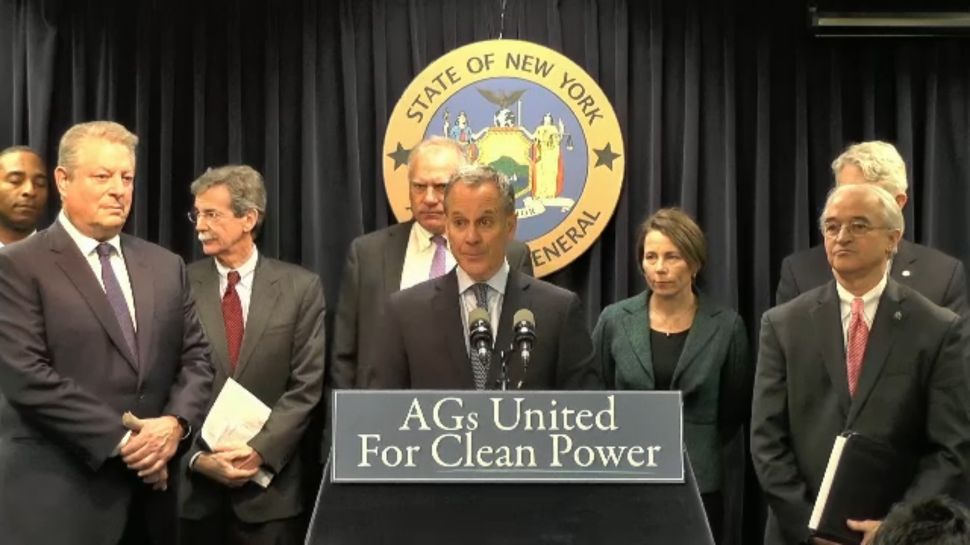