What is Rihanna wearing to “Work, work, work” in? Quite a varied wardrobe of clothes, including one very glittery Giorgio Armani jumpsuit. For her ‘Anti’ World Tour, which has a whopping 71-dates planned, she will be donning a custom silk tulle jumpsuit from the Italian designer. But this isn’t any average jumpsuit, as it’s smothered in Swarovski crystals and finished off with brown silk fringe. The singer pairs the sparkly look with a matching hooded coat from Armani, which gives off some mysterious Little Red Riding Hood vibes.

The ‘Anti’ tour kicked off on March 12 in Jacksonville, Florida and in that first show, Rihanna changed costumes nearly half a dozen times over the 90-minute set. So who joined Mr. Armani’s creations on stage? RiRi’s go-to stylist-turned-designer Adam Selman whipped together a t-shirt romper in silver, which was paired with custom Giuseppe Zanotti boots that reached high enough to strap around the singer’s waist.

Rihanna closes off her show in an oversized suit by Y/Project in an sandy hue. The brand, helmed by Belgian designer Glenn Martens, was recently selected as a finalist of the 2016 LVMH Prize, a brilliant accolade for an emerging designer.

Despite the loose silhouette of this two-piece getup, Rihanna adds a dose of sex appeal with a leather bustier from custom leather designer LA Roxx and a choker from Jacquie Aiche, a jeweler who released a temporary tattoo collab with the singer. Although she serves up a lot of sartorial inspiration, we secretly hope Rihanna adds in a few more looks before her final show in the U.K. on August 21. 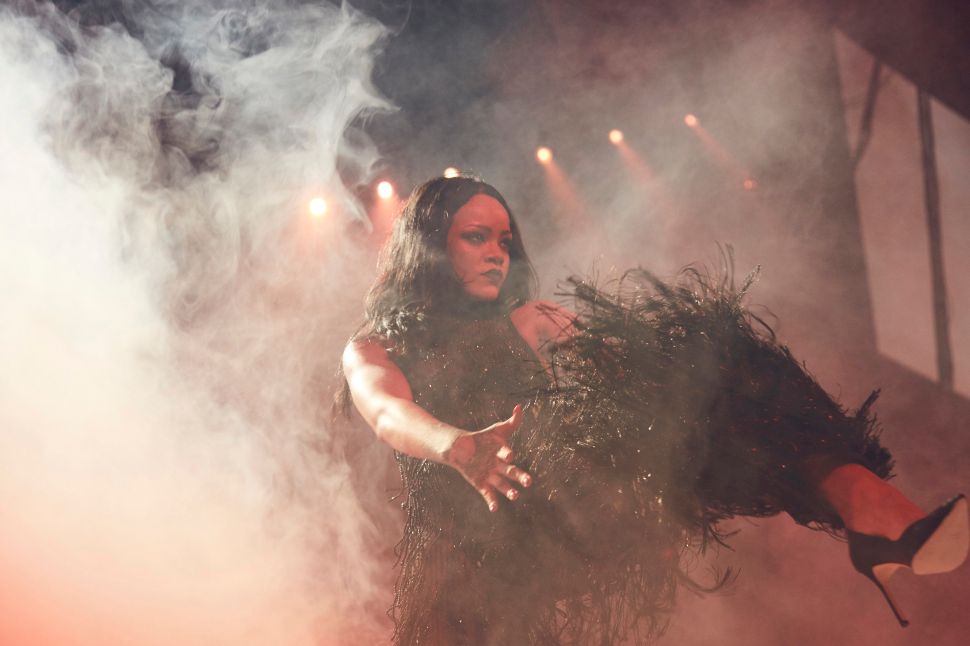