Is this song from Houston? Atlanta? LA? New York? Does any of that still matter in rap?

During its Golden Age and post-Golden Age creative height, rap was not so much a genre as it was a loosely connected collection of local folk musics; different cities had distinct sounds, different key artists, different reference points. Each city’s scene was an entirely separate ecosystem. Each city’s geography, population and culture was reflected in its particular spin on hip-hop. That era of regional individuality did not, and could not, last forever. But it echoes on today in surprising ways.

Even during the height of regionalism, there was plenty of cross-pollination. The origins of many rap scenes, from Virginia to Houston to Los Angeles to Northeast Ohio, are stories of people moving from rap’s mecca (New York City), to far-flung locales and bringing their influences with them. But what other cities, particularly in the South, did was take that template and turn it into something region-specific and innovative.

As Luther Campbell of 2 Live Crew tells it, Miami’s geography and population influenced the rap sound of the city that he helped create in the 1980s, which came to be known as “Miami bass.”

Miami bass reflected major parts of the city’s population, including that of Campbell’s parents (his father was from Jamaica, his mother was Bahamian). The tempo also had to be fast—at least 20-25 beats per minute faster than most hip-hop. This combination would form the template for Miami bass, and would even eventually find its way to Atlanta, which made its own, more melodic version of the sound, which became known unsurprisingly as “Atlanta bass.”

Miami was far from the only region to shape hip-hop in its own image.

In the late 1980s and early ’90s, New Orleans developed a style that came to be called “bounce.” The style played to the city’s long tradition of call-and-response music, using raunchy chants to get the crowds going. Even more region-specific, almost every bounce song in the genre’s early period had a so-called “project rap” section, where the rapper would shout out each of the city’s numerous housing projects and wards in turn.

Musically, for reasons even people who were there at the time can’t really explain, the style became dependent on sampling one particular obscure NYC rap record, a tune called “Drag Rap” by The Showboys (so called because it interpolated the “Dragnet” theme). It should be noted that almost no one in New Orleans knew this record’s album title or the artist’s name—it was universally referred to as “Triggerman” throughout the region, after the name of one of the characters in the song’s lyrics.

Memphis developed its own, darker regional spin. The rappers spit fast, often in a double-time or triplet feel, often focussing on bleak, murderous subjects. Heavy on TR-808 drum machines, Memphis rap has a more aggressive feel than most other Southern scenes, to match the region’s favorite dance, the seemingly chaotic stomp known as “jookin’” or “gangsta walking.”

Houston’s scene was two-headed, divided by long-running tension between the city’s North and South sides: The North was run by the influential Rap-A-Lot label, home to the legendary Geto Boys; the South was run by DJ Screw and his influential Screwed Up Click.

“Screw was a student of Houston rap,” Lance Scott Walker, a scholar of the city’s scene and co-author of the books Houston Rap and Houston Rap Tapes, told the Observer. “The difference was that while Rap-A-Lot built music around its voices, DJ Screw built the music as a foundation, and the voices emerged and developed inside of it. Listen to freestyles by Fat Pat, Lil’ Keke, Big Moe, and Hawk on Screw tapes and you can hear their rhythmic sensibilities develop over the years. They pick up on DJ Screw like musicians pick up on a drummer’s swing.”

Miami was enamored of fast tempos, but in Houston it was all about slowing things down, a practice that became synonymous with DJ Screw, who built his reputation on mixtapes he produced that violently slowed down songs, to jarring, distinctive effect, a practice that became known as “screwing” due to his influence. To this day, lines from Screw’s mixtapes are re-purposed into hooks by artists from the city.

Isolation, perhaps more than any other single factor, allowed these scenes to not just grow, but to mutate in increasingly disparate ways. But by the late 1990s, cracks were starting to show. A new generation of streetwise bounce artists from New Orleans broke through to the mainstream on one of the city’s earliest labels, Cash Money Records. Atlanta largely moved away from Miami’s style and toward Memphis, adapting a homegrown version of its style they dubbed “crunk.” By 2004, Houston’s slow tempos, screwed beats and distinct regional vocabulary reached the national spotlight thanks to the sudden success of artists like Mike Jones and Paul Wall.

Of course, the Internet changed everything.

The rapidity of global communication has turned the idea of regional styles on its head. Today, the most popular rappers and producers, whether from the South or not, take disparate elements of different Southern regional styles for their music as a matter of course. Virginia producer Lex Luger, for example, has shared own spin on Memphis’ sound not only with Atlanta’s Waka Flocka Flame and Miami’s Rick Ross, but also artists like Jay Z and Kanye West. Drake just finished up an entire album with Atlanta’s Future, and frequently uses Houston’s musical style and lingo. A$AP Rocky first came to prominence by using a screwed-up sound on his single “Purple Swag.” Memphis’ signature triplet flow has been adopted by Atlanta’s Migos.

What all of this mixture shows is that mainstream rap is now, rather than a collection of folk musics, a big, primarily Southern stew. Elements of what used to be distinct styles are quickly becoming a part of a more monolithic sound. Picking apart the individual parts is becoming ever more difficult. But despite the monoculture, regional scenes are still managing to survive in surprising ways.

“Where I don’t think Houston will lose its regional sound is in the almost limitless library of Screwtape freestyles that routinely re-appear as hooks in Houston songs,” Lance Scott Walker told the Observer. “That is a part of the culture that will never go away, and as Houston artists continue to collaborate with artists from all over the world, that influence will spread because it’s so different. Houston music will always be slow, and that sound will always be linked to the Bayou City. That will bring new listeners to the genre, and they’ll learn about the culture and the history that go along with it. Every hip-hop track imaginable can be explored through the mixing methods developed by DJ Screw. I don’t think Houston will ever cease to be an influence on hip-hop at large.”

It’s in that proud individuality—Houston’s DJ Screw hooks, Memphis’ triplet flow, Miami’s quick tempos—that regional scenes live on, even after their distinctiveness has withered away. So enjoy what you hear on the radio, but keep in mind that the omnipresent sound of today has roots in a time when geography, rather than money or the latest trend, was destiny. 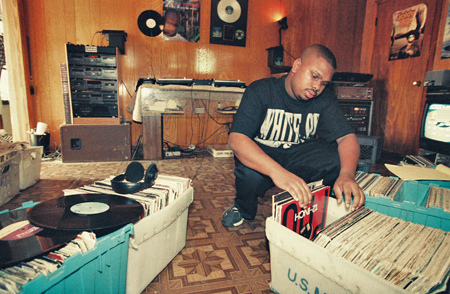