There aren’t too many New Yorkers who can boast that they live in a 3,000-square-foot, two-bedroom, two-bathroom loft, with a doorman, elevator and view overlooking Cooper Square in the East Village—and even fewer who can say their home is filled with works by some of today’s most recognizable living art stars. However, Greg Miller, an investment banker who runs an eponymous art publishing business on the side, and his husband Michael Wiener, a doctor, are among the few.

The couple shares their Bade Stageberg Cox (BSC)-designed loft inside the historic Carl Fischer Music building with three dogs and between 30 and 40 remarkable works of art at any given time. They annually swap out works and rehang from their collection of nearly 600 pieces—though they’ve stopped counting, says Mr. Wiener.

You designed your home with an architect. What was that like, and what were your biggest considerations? Mr. Wiener: The building was converted from commercial to residential use in 2001 and we were one of the first owners, so we bought something rare in New York at the time: raw space. There were no walls and nothing but an unfinished concrete slab on the floors, just big open spaces.

Natural light enters on all sides and we look into tree branches. There are very few lamps—all the lighting is directed at the art. Most importantly, the space has proven versatile for our collection, allowing us to install a wide variety of artworks over the years. Each time we rehang, it feels like a new apartment. We never get tired of it.

How has the art collection influenced the other design elements in your home? Are those also ever changing or are they constant? Mr. Wiener: The dining table was custom-designed by our architects to introduce an organic shape to the angular layout. It was handmade in Brooklyn by Walter Goodman, who is a terrific craftsman and a consummate perfectionist. He hand sanded the entire surface, which is made of a thick slab of solid walnut.

The furniture does not change, but the architecture was designed to be flexible to the needs of rotating artworks. The open layout is framed by diagonal walls that echo the angles of Cooper Square and also add natural separations for art. The art walls are balanced by wooden flooring made of Douglas fir, which adds a warm glow to every room. In several areas, the same wood flows up the walls to create custom cabinets and hidden doors.

How often do you rehang the collection and how do you choose? Mr. Miller: For us, changing the art around keeps the collection alive. We don’t do a complete reinstallation of a whole new set of works. It tends to be a bit more organic and even takes place over the course of a year, where a new piece will come in and we’ll find a spot for it and then we’ll move a few things around.

Mr. Wiener: We always start the year saying, “We’re not going to do too much.” And there’s always a domino effect.

Are there any artworks that have been challenging to live with? Mr. Miller: We wanted a Fred Sandback sculpture for a long time. We spent a good two-plus years looking at various Sandback sculptures. To think through how to install it in such a central space was exciting. [We wanted] to make that particular work something you had to engage with all the time, not just visually, but also to make it a work you had to sort of be careful with. We’ve had a few problems, and the dogs are never the problem—it’s always a person.

How many times have people broken it? Mr. Miller: Easily a half-dozen times. This is a work we’ve now had up for about four years, and it’s hard to take it down. We always end up keeping it. It’s hard to think about the apartment now without that Sandback work installed.

Do pieces in your collection have a place in your day-to-day rituals? Mr. Wiener: Almost every single one. Every time we take something down we feel its absence. It becomes part of the way you come home and they greet you.

We have a Jim Hyde sculpture that looks like a dog bed and so sometimes the dogs use it as a dog bed but the artist doesn’t mind. Before we had the Sandback, we often used that same space for other floor sculptures, but our coonhound at the time learned how to jump over them. Our new puppy keeps banging into the Sandback, but that’s the first time we’ve had a dog that even came near it.

How long have you participated in the Armory Show’s collectors’ program, and why? Mr. Wiener: We’ve done [the program] every single year except one.

Mr. Miller: I remember going [to the show] and buying a work from an artist who is very central to our collection—Ghada Amer—when it first started about 15 years ago. I’ve always had a fondness for the show.

Mr. Wiener: We also appreciate going to see the collections of other people. We always learn about ourselves through conversations with other collectors by being cornered and asked, “Why this?” and “Why would you do that?” That openness is how we’ve always thought about collecting. [When we started] we were so young that we weren’t thinking about what we’d do when we died and donated to a museum. We were just thinking, “How can we share this today?” 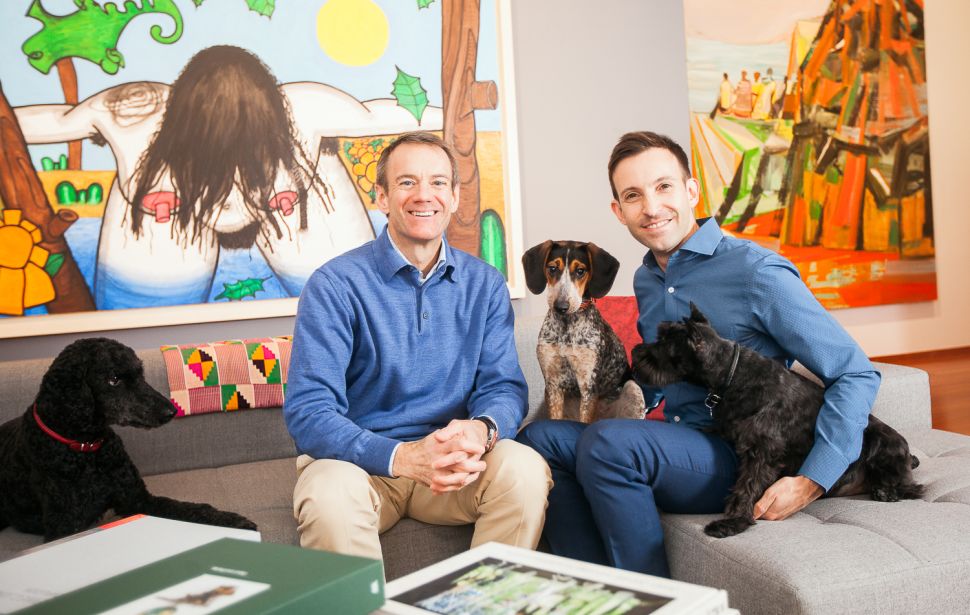