At the end of last week’s exploration of cowboy justice, Chip discovered that his mother, Christine, was responsible for kicking his wife out of the country, and it seemed like maybe this news would finally kick-off the confrontation that had been brewing between mother and son all season. So of course this week Christine slips into a diabetic coma moments before Chip storms into the house.

Turns out Christine is diabetic as hell and has been living undiagnosed for a while, succumbing to a coma after the rejection of a sugar pie she prepared for a ladies luncheon throws her into a frenzy of tossing out any and all sugary items in her home. After Chip discovers her on the kitchen floor (“that’s a weird place for a nap”) and engages in some super dark physical comedy digging around under her body for the phone and attempting to kick her into the living room, he gets her to the hospital, and the rest of the episode pretty much centers on waiting for her to wake up or die.

Over the last few weeks I’ve been wondering if the people behind Baskets feel sympathy for their characters. Dale, with all his petty disdain and rage and materialism, is almost always loathsome; twin brothers Cody and Logan are dopey cartoon hipsters with no redeeming value beside that their mother (and apparently The Chemical Brothers) adores them. Last week’s exploration of cowboy justice didn’t make Eddie out to be a bad dude, exactly, but…still kind of a goofy jerk. They definitely have sympathy for Chip, establishing that his anger and sadness and impotence and love of clowning are all wrapped up in actual tenderness and masking his sensitivity and reaction to his father’s death, and for Christine, who’s a bit of a caricature of a gluttonous, dopey suburban mom but also fiercely loyal to her children (except for maybe Dale) and tormented by demons and losses of her own.

This got me thinking about something actually more interesting, which is that the show has some kind of complicated relationship with identity. Or maybe more specifically manufactured identity, the personas that people adopt in order to get along. At some point previous to the series start, Chip decided to be a specific kind of clown with a specific life, and the last eight weeks have repeatedly challenged that decision. Instead of an artist living in Paris with a French wife, he’s a rodeo clown in California, riding around with Martha in her Costco corporate car. Christine defines herself through her love of energy drinks and snacks and Cody and Logan’s accomplishments, Eddie has his cowboy creed (see last week, drinking and womanizing etc etc)…almost all the characters have a code, almost all the characters are at odds with whatever code they’ve adopted, and every week this results in either comedy or pathos or some fucked up mix.

When Chip calls Dale to tell him that their mother is passed out on the kitchen floor, Dale is still in the throes of enjoying his assumed position as ‘head chaperone’ of his daughter’s volleyball team—a gig he took on in an attempt at countering Cody and Logan’s success as DJ’s. He urges Chip not to call an ambulance, as they’re too expensive, and suggests he’d be better off summoning a limo or a stretch Hummer, as their mother is too fat to fit into a standard emergency response vehicle anyway.

This is a pretty nasty/dark/terrible way to respond, but Dale is a nasty/dark/terrible dude. Throughout this episode he berates or insults or lies to every single person he comes across. He shouts over his daughter’s coach, he bullies Chip, he announces that his daughter’s friend’s are having the worst dance party that he’s ever seen. His initial callousness towards his mother’s coma is betrayed by his angst and nervousness at his daughter’s game the next day, and peaks with him storming the court to return a serve and then awkwardly lying about it before being ejected from the game (a sad highlight this week is Dale’s daughter sadly asking her friends to please stop filming his flame out with their cell phones).

It’s funny, because he’s so nuts and his bullying is so ineffectual, but also—increasingly throughout the episode—Dale becomes something bordering on sympathetic, because it’s all so transparent. Dale is awful but he’s in pain. Lots of awful, awful pain.

He’s an asshole, but I think he’s an asshole because he’s so sad and scared. Chip—who meanwhile is decorating his mother’s hospital room with balloons and flowers and staying at her side, researching diabetic comas on his phone—has several times throughout the series expressed his resignation at being a loser in a family of losers, but Dale refuses to accept this, of feel that way. He’s the proprietor of his own college, the star of commercials that seem to constantly air in Bakersfield, and if that’s not enough he’s a volleyball chaperone, and if that’s not enough he’s negotiating sweet deals on hutches…he’s flailing, basically, because he wants to win. He wants to be a winner. He wants to be cool and respected and powerful and he resents anyone that prevents that from being the case or reminds him that his last name is Baskets, his brother is a rodeo clown, and so on.

When Dale finally shows up at the hospital, he brings a Toblerone as a gift…which is a ridiculous thing to bring, being that his mother is A. in a coma, and B. in a coma because she’s diabetic, But it’s kind of the perfect gift for petulant, weird Dale to think of. Because Christine probably really likes Toblerone, and he wants to give her something she likes, but he also resents the shit out of her so why not bring her something that would kill her should she be able to eat it.

It’s weird and a little absurd but being a part of a family is weird and absurd because you’re fucking bound to these people and there’s nothing you can do about it. Well, not nothing. You can jump off a bridge, as Dale suggests Papa Baskets did at tonight’s close, much to Chip’s consternation. We’ll see where that goes. 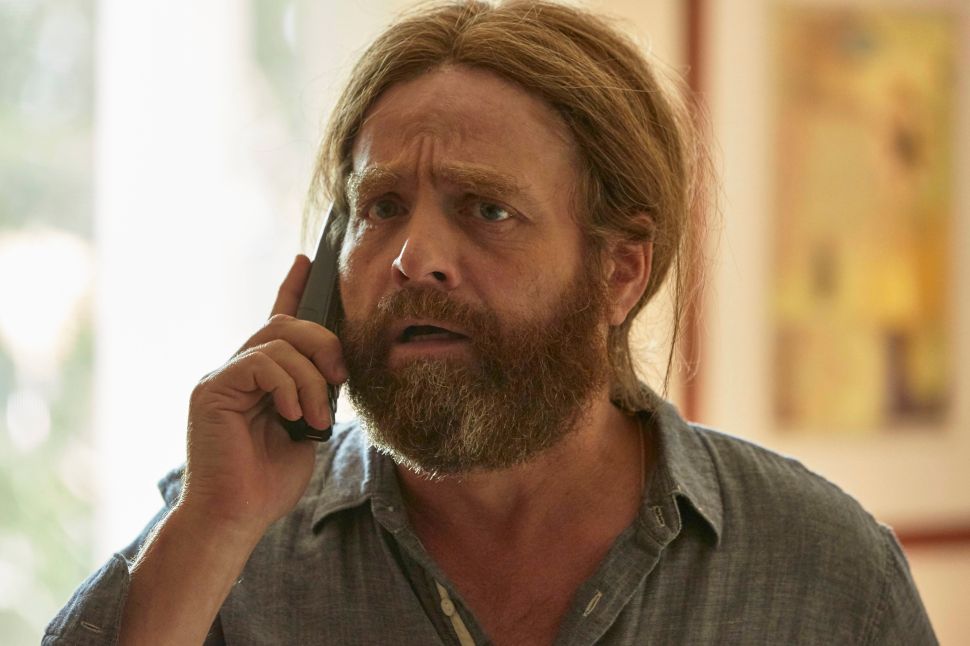