The Naked Cowboy doesn’t mind being constrained, but Batman does not intend to go quietly.

Such are the diverse interests at play in the saga surrounding Times Square’s pedestrian plazas—which the City Council is seeking to put under the jurisdiction of the Department of Transportation so the agency can regulate the presence of costumed characters and painted ladies who pose for pictures in exchange for tips. City politics can often feel like a circus, but rarely as much as it did when the stakeholders—Spiderman, Batman, the Naked Cowboy, the Penguin—took to the plaza in front of City Hall this morning.

For years the costumed characters have raised the eyebrows of lawmakers thanks to arrests of aggressive Batmans and Elmos demanding tips or even getting into brawls, but under the First Amendment, the city cannot stop someone from dressing up and asking for money. The drama reached its boiling point last summer, amid Daily News-driven coverage of desnudas, women wearing only paint on their breasts. Mayor Bill de Blasio deemed their presence in Times Square “wrong,” and his administration launched a task force to try to deal with the women and their more aggressive costumed counterparts.

“In no way is anyone trying to tamp down or limit expression or free speech or the ability to make a living in Times Square,” Councilman Corey Johnson said today, during a hearing on legislation that came out of the task force. “We’re trying to bring a little bit of order on the plazas themselves, while still allowing flexibility for a high number of individuals to still engage in lawful activity.”

Not everyone is buying it.

“Of course I am opposed about something that will make me a slave over there,” Jose Escalona-Martinez, 42, who was dressed as Batman, told the Observer in front of City Hall. “I’m not a robber. I’m not a cow. I am a human being and I have a right to be in Times Square, walking, dressing like this.”

Mr. Escalona-Martinez has been working in Times Square for five years, and has been arrested—or as he put it, “felt injustice”—several times, most recently on February 25, when he was accused of stealing $50 from a tourist, according to news reports. A few weeks before that he was given a summons for disorderly conduct. He spent 10 days in jail for “aggressive begging” before being acquitted in 2014, and he sued the NYPD in response.

“I guarantee you—100 percent not guilty,” Mr. Escalona-Martinez said. “I’m not a bad person. I’m a real good man. My rights, I’m gonna defend my rights all the time, and I’m not gonna shut my mouth.”

But one of Times Square’s most established performers, the Naked Cowboy—real name Robert John Burck—came out to support the legislation, saying he’d been confined to a tiny traffic median back when first started out 17 years ago, before the plaza had been created.

“To me, it’s just common sense—a little regulation, it’s not a big deal. And believe me, I’m all about freedom, First Amendment rights and everything else,” he said. “But at the same time, everybody else has First Amendment rights, too. They have a right to be left alone if they don’t want to be bothered.”

The long-haired Mr. Burck—dressed in his trademark cowboy hat, boots, underwear and nothing else—said the plazas had brought in more characters and as a result, “it’s just become a little bit of a circus.” He doesn’t mind much—though unlike the Times Square Alliance, the complaints aren’t direct his way, he noted—but said he tries to stay above the fray.

“I see the aggression, see the people—one person gets a picture, ten people jump in, they demand the money, and that pisses that person off,” he said, “and that happens all day long. Now, as a good businessman, I don’t want to make anybody upset, ever. I don’t care if they walk away and don’t give me a buck. They’ll tell their family and I’ll get fifteen family members.”

Despite the focus on desnudas last summer, and on brawling costumed characters before that, the Council and the DOT repeatedly said today’s legislation wasn’t about any one group. Councilman Dan Garodnick said Times Square has always been “weird” and “edgy,” and it’d stay that way—but that regulation would allow people to avoid that weirdness if they wanted.

“You want to come to Times Square and hug an Elmo or take a chance on a CD from an unknown artist or take a picture with a naked lady, go for it,” Mr. Garodnick said. “More power to you. But we’re also going to give you a safe space if you don’t want to be approached or harassed or solicited.” 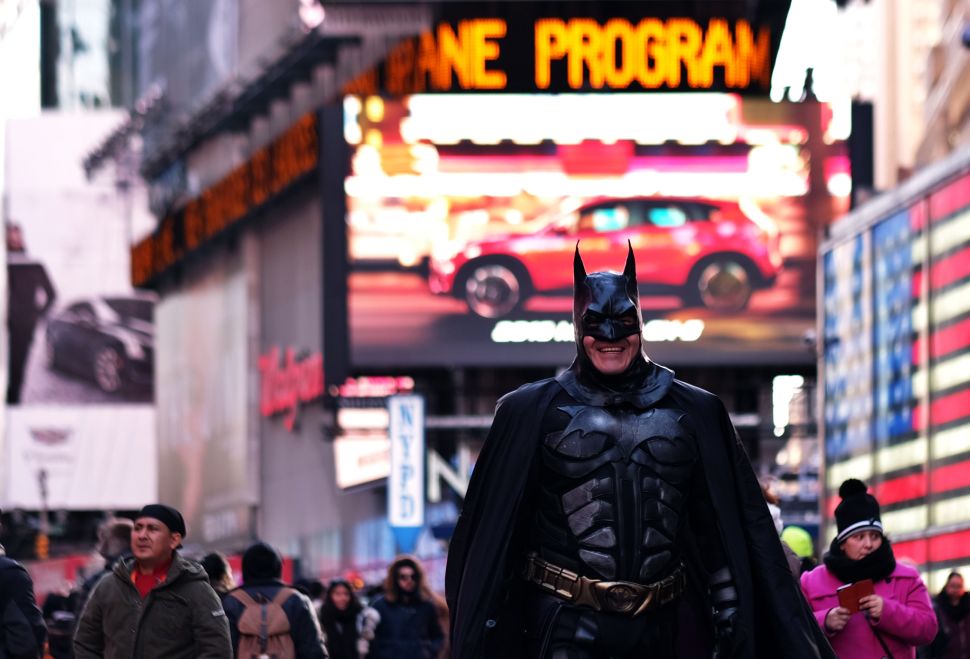