After her smashing five-state victory on March 15, Democratic frontrunner Hillary Clinton is clearly trying to pivot to the general election so that she can begin building an early advantage on the eventual Republican nominee.

But Bernie Sanders, who reportedly is gearing up to barnstorm New York in advance of its April 19 primary, gives no indication of going quietly into that good night for the sake of the party’s fortunes in November. On the heels of his three victories on Saturday in unrepresentative, low-turnout caucuses dominated by the most progressive “true believers,” Mr. Sanders continues to march forward even though his prospects for victory are close to zero.

Perhaps it is not altogether surprising that Mr. Sanders is unwilling to take one for a team that he never joined until last year. After 43 years in politics in which he repeatedly spurned the Democratic Party, the self-styled independent socialist finally decided to run for president as a Democrat only when it suited his purposes. Perhaps those who hold the curmudgeonly Vermont septuagenarian up as a refreshingly honest leader who doesn’t make cynical political calculations should consider his statement that he decided to run for president as a Democrat because he would get more media coverage. Uncalculating and principled, indeed.

At this point, one must ask the question of what Mr. Sanders can accomplish by continuing his campaign beyond damaging Ms. Clinton. Mathematically, his chances of actually winning the nomination are virtually nil. Even discounting the overwhelming edge Ms. Clinton has among superdelegates, it is all but impossible for the Vermont socialist to pull even with her among delegates elected by the voters. The Democratic Party, unlike the GOP, has no winner-take-all states, which means he would need an unbroken series of 20-point landslide victories from here on out just to pull even.

There is much more historical evidence that tough primary battles do more harm than good to the eventual nominee.

There are those who say that, if nothing else, a continued battle on the Democratic side will “sharpen” Ms. Clinton and lend itself to party-building. It has become an article of faith in many precincts of the American left that the protracted fight between Barack Obama and Hillary Clinton in 2008 was good for the Democratic Party. We are often told that this is exactly why Bernie Sanders should stay in the race this year, despite the near certainty that his only chance to be the nominee is for unexpected events to force Ms. Clinton out of the race.

As evidence, those who espouse this theory note that the drawn-out battle for the nomination eight years ago forced the two Democrats to compete in states that went later in the primary calendar. Many of these states hadn’t gotten a personal visit from a Democratic presidential candidate in decades, so the excitement and the attention expanded the base and enabled Team Blue to win states such as North Carolina and Indiana in the fall. Hoosiers of a certain age, treated to the spectacle of Mr. Obama sinking three-pointers in a Kokomo gym and Ms. Clinton downing beers at a Crown Point bar, recalled Bobby Kennedy’s barnstorming of their state in 1968.

There is significantly less recognition of the fact that no two election cycles are alike and that one election cycle does not constitute a trend. In U.S. political history, it has been far more common for long, protracted primary battles to damage the party in which such a fight has been waged, and we need to look back no further than the 2012 Republican race for our most recent example. The turbulent and often unhinged character of that nominating contest, in which Mitt Romney prevailed largely because he buried his opponents in an avalanche of money, put the former Massachusetts governor behind the eight ball before he could even wrap up the nomination.

Mr. Obama went on to win reelection with plenty of room to spare in the Electoral College count, even in a year in which the struggling economy and high unemployment numbers probably should have doomed the incumbent. It marked only the third time in U.S. history in which a president won a second term by smaller margins in both the electoral and popular vote counts than the margins by which he had won his first election. Typically, a president whose standing falls at all in his reelection campaign loses, but Mr. Romney came out of the Republican slugfest as damaged goods and could not capitalize on the weakness of Mr. Obama’s position.

There are other examples, notably the 1968 Democratic primary campaign, as well as the 1976 and 1992 Republican primaries, in which divisive nominating contests put the ultimate nominees in a deep hole coming out of their conventions. They all eventually recovered, but not enough to stave off defeat. And in retrospect, it is clear that the messy 1980 Democratic battle between President Jimmy Carter and Senator Ted Kennedy inflicted significant damage on an incumbent who was already struggling, though the full magnitude of his problems would not become fully clear until several months later, when he lost 44 states to Ronald Reagan.

In short, there is much more historical evidence that tough primary battles do more harm than good to the eventual nominee, the exception of 2008 notwithstanding. And let’s be honest here about why 2008 was an exception. Given the condition of the Republican Party that year—after the debacles of Iraq, Hurricane Katrina, the bungled attempt by President George W. Bush to privatize Social Security, and the Terri Schiavo mess in Jeb Bush’s Florida— virtually any Democrat would have won that election.

We cannot take 2008 as a blueprint, in part because it was a unique election, and in part because it isn’t 2008 anymore. The Republican Party is no longer on defense, bleeding to death from a thousand cuts. It is now the Democratic Party that holds the White House, and regardless of the messy nominating race on the GOP side this time, Team Blue nonetheless faces an uphill battle if it wants to maintain control of the White House and gain control of the Supreme Court. Our nation’s recent history demonstrates the difficulty of one party retaining the White House three terms in a row. It has only happened once since 1948, when Vice President George H.W. Bush rallied past a fatally flawed Democratic nominee, Michael Dukakis, to keep the White House in Team Red’s hands in 1988.

If Mr. Sanders decides to continue his campaign, despite the heavy odds against him, it is certainly his right to do so, and he clearly has the money to keep running. His eye-popping $43 million haul in February alone, and the likelihood that he will keep raising more money at a good clip going forward, will enable him to go all the way to the convention if that is his choice. And it is certainly legitimate to press forward in the hopes of getting his message out and perhaps having some leverage to help mold the party’s platform for the November campaign.

But his move to vigorously contest New York, which Ms. Clinton represented for eight years in the U.S. Senate, gives every indication of an intent to inflict significant damage upon the party’s near-certain nominee. It is well-understood that a loss or even a close shave in New York by Ms. Clinton would feed the ongoing narrative that she is a weak candidate, a narrative that persists despite the fact that she has won more votes in this year’s primaries than any candidate in either party. If Mr. Sanders damages Ms. Clinton in New York on April 19, it won’t be enough to derail her nomination, but it could jeopardize her prospects in the general election campaign.

Democrats welcomed Mr. Sanders into the race in 2015 in large part because of the fear that he might run as an independent and perform the same service for the eventual Republican nominee that Ralph Nader performed for George W. Bush in 2000. By bleeding away liberal votes from Al Gore, Mr. Nader ensured Mr. Bush’s disputed victory. Had just a third of Mr. Nader’s votes in New Hampshire gone to Mr. Gore instead, the Democrat would have won the Granite State’s four electoral votes and the election; the epic meltdown in Florida would have been a mere historical footnote. With the peril of an independent run fully understood, Democrats took the famous advice of President Lyndon Johnson that it was better to have one’s foe inside the tent pissing out than outside the tent pissing in.

The math is clear. Mr. Sanders is not going to be the Democratic nominee. But if he takes Ms. Clinton down with him, it will be a case of inviting one’s foe into the tent and watching him piss away the party’s chances in November. 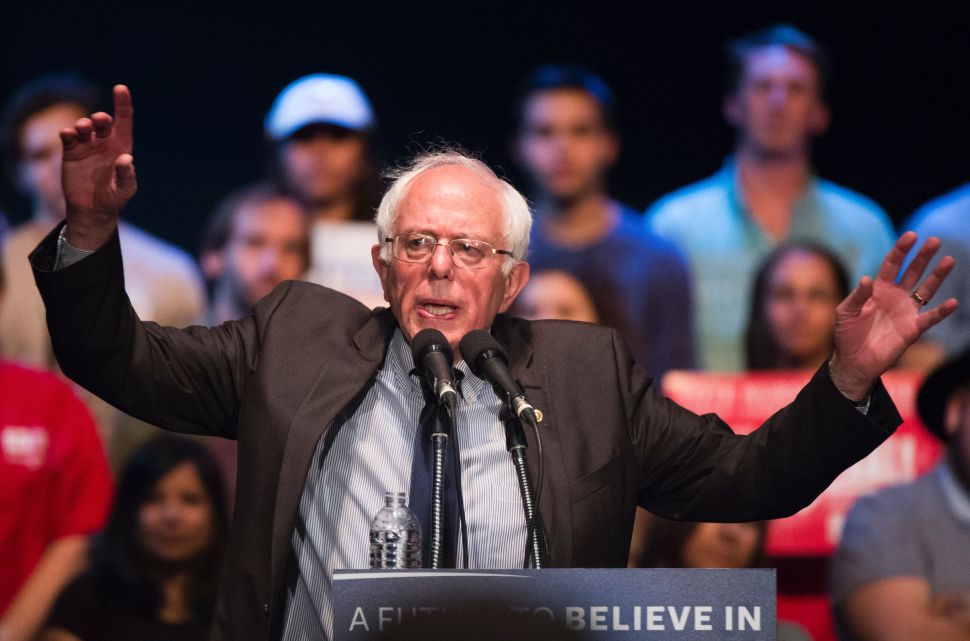