This week on Better Call Saul, Mike Ehrmantraut learned the wisdom behind the old adage “Be careful what you wish for.” After refusing to take the deal offered/insisted upon by elderly druglord Hector Salamanca to clear his hothead nephew Tuco of a gun charge stemming from their run-in a couple weeks back, Mike easily dispatches two goons sent to his house to intimidate him. (Appropriately enough, he finds out that the footsoldiers have arrived by using carbon paper under his welcome mat to detect their footprints.) “We were just supposed to scare you,” one of them says when the old hardass holds them at gunpoint. “That’s all.” “You try harder next time,” Mike replies before dismissively sending them on their way.

They tried harder next time, alright. Looking up from a poolside idyl with his beloved grandaughter Kaylee, Mike sees the show’s biggest Breaking Bad cameo to date, or technically two cameos: the terrifying twin-like enforcers known as the Cousins. From their matching cueball heads to skull-encrusted boots, these silent and sinister Salamanca relatives have always had a flair for the theatrical. We first met them as they crawled on their hands and knees into a shrine to Santa Muerte, the cinematography and setting alike radiating Texas Chain Saw Massacre horror vibes. This time around, they appear to Mike, for the first time, like the cartel’s answer to the little girls from The Shining. But it’s not their creepy demeanor or ostentatiously eeeeevil choice of vantage point that sells their menace—it’s the look on Mike’s face, which for the first time since Better Call Saul started registered shock, anger, and actual fear. My own reaction to their arrival was markedly different: I cheered and clapped loud enough for my partner to come running in from the other room to make sure I was okay.

But “Bali Ha’i,” last night’s episode, had much more going for it than the visit from the cousins, or the subsequent sit-down between Mike and Tio Salamanca, in which Ehrmantraut bulldogs his way into a payoff ten times larger than what he’d initially been offered. The hour’s finest moments were way less life and death, focused on Kim, a character who’s rarely been the center of attention, and certainly not to the degree she was this time.

Visually speaking, her face was the image that defined the episode. This began early, with a long-held look at her as she sits on her bed, listening to Jimmy serenade her answering machine with a reedy rendition of “Bali Ha’i” from South Pacific. Saul’s a show that doesn’t mind sitting with a supporting character as she sits quietly and soaks in the goofball charm of its protagonist, a guy with whom at this point she’s both furious and, despite herself, infatuated. Using this as the payoff for her morning routine, during which it becomes increasingly apparent she was waiting for him to call despite having no intention of picking up, was a lovely idea, and director Michael Slovis’s execution was inspired.

Kim gets another key close-up later, during an unexpected lunch with the opposing counsel in the Sandpiper case. Dennis Boutsikaris, a marvelous character actor who looks like he was born to play lawyers who help people even richer than he is get away with shit, returns as Rick Schweikart, founding partner of the firm defending the crooked nursing-home corporation from Jimmy and company’s class-action suit. He’s impressed enough by Kim’s conduct in court, battling hard against a motion she knows she’ll lose, to invite her not just for a bite, but for a job. To make his point that her lack of support from her boss Howard Hamlin, a no-show at the hearing, is not the kind of to take lightly, he regales her with a tale of his first big case, when he was hung out to dry by his own superiors; they saw it as a “trial by fire,” but he saw it as a sign he could never trust these people. Considering the complete and total stonewalling she’s getting from Howard—seen this episode during an endless walk-and-talk shot with Kim on their way to a big meeting with their big new client, minus the “talk” bit—Schweikart’s probably right.

But rather than show her paying rapt attention to the story, the shots of her during Schweikart’s monologue reveal her as fidgety. Her eyes wander, her smile feels slightly forced, her effect gives the impression of a woman unhappy with similarities between his story and her own situation, unsure of where this is going and uncomfortable around people accustomed to being the most interesting man in the conversation, particularly when the power differential gives their interlocutors no choice other than to regard them as such. So when he finally makes the job offer, both her voice and her guard crack ever so slightly, as she realizes she no longer need be so cautious. It’s thoughtful acting on the part of Rhea Seehorn, who has a relatively thankless role amid the Jimmys and Mikes and Chucks of the world. It’s just as thoughtfully filmed and edited, taking the traditional shot-reverse-shot reaction setup and investing it with just a little uncertainty and novelty even as it echoes the closeup with the answering machine and a beautiful little zoom later on when she’s deciding whether or not to call Schweikart and take the job. And it all depends on Better Call Saul’s trust in the audience to appreciate quiet, to enjoy sitting still. 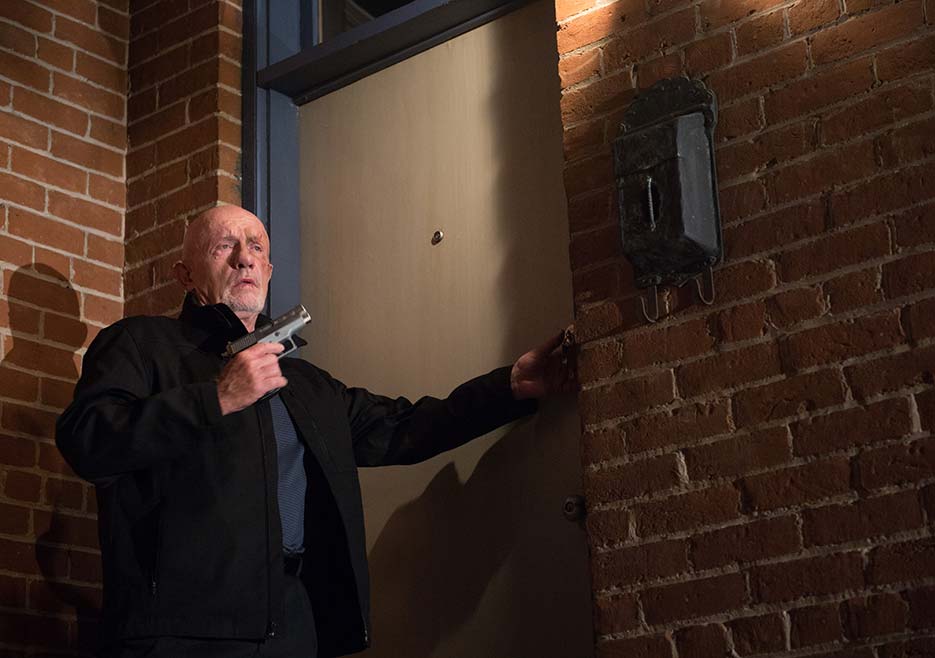