“Lawyers HATE him: This ONE WEIRD TRICK will DOUBLE Better Call Saul’s legal-drama half’s watchability!” Last week, the split between BCS’s Mike Ehrmantraut and Jimmy McGill storylines began to show signs of strain. However good Bob Odenkirk is as the attorney who couldn’t go straight, however tight and sophisticated the writing is for his attempts to win big for his clients, it’s still a class-action lawsuit against a nursing home we’re talking about here. Mike’s material has all the benefits of Jimmy’s—the restraint, the quiet desperation, the slow slide into criminality—but more besides, namely actor Jonathan Banks’s peerless portrayal of a good man grown hard and the pit-in-your-stomach sense of impending doom most frequently associated with Breaking Bad, the show’s forerunner. How can Jimmy McGill, Esq. compete?

It’s actually pretty simple, judging from “Gloves Off,” this week’s episode: Jimmy holds his own by hanging out with his older brother Chuck. Michael McKean has always been perfect in the part, which could easily be a disaster—I mean, a founding partner in a high-powered law firm who’s psychosomatically allergic to electricity? It sounds like an improv game. But his falling out with Jimmy during Season One, shouting at his kid brother that he’d deliberately sabotaged his career for years since that’s how terrifying he finds the thought of a con man with a law degree, was one of the most powerful scenes of 2015, on any show. Tonight, we get a sequel of sorts: Jimmy storms into the place to confront his brother about punishing his girlfriend Kim for his own transgressions, winds up springing into action when he finds the guy shivering in pain, wakes up the next morning, and tries to hound the older man into saving Kim’s job in exchange for his own promise to quit practicing law—a sort of voluntary extortion.

The tragedy is that in the question of whether Jimmy is no good, their verdict is unanimous. Yes, you’ve got Chuck’s sneering smile when he says “You want me to commit a felony, because that’s what you’d do, right?” But you also have Jimmy’s desperate, defiant embrace of his own sketchiness: “Life is not one big game of Let’s Make a Deal,” Chuck says. “Yes it is! I’m Monty Hall!” Jimmy shouts back, clearly relishing the opportunity to gainsay his big bro even if it requires admitting his lack of character. He does the same later, referencing game shows again by telling Chuck to “come on down!” and roll around in the dirt. You leave the scene feeling sad for Chuck’s isolation and unwillingness to face his problems while picking apart his brothers, and for Jimmy’s nihilistic embrace of his own worst instincts. Chuck and Jimmy together are a well the show should return to as often as possible.

Mike, meanwhile, shuffled his way into a bonafide Breaking Bad prequel. Our first guest: Lawson, Deadwood actor Jim Beaver’s folksy and efficient gun dealer, years before selling Walter White his series-ending machine gun. His scene with Mike drops a major reveal—the old man’s a Vietnam vet—and is chilling for its casual, workaday vocabulary regarding machines designed only for killing. “Too much gun,” Mike worries about one particularly large rifle. “For most applications, I’d tend to agree,” Lawson replies, as if they’re discussing which iPhone model gets the most bang for the buck. The two men respect each other for their shared calm demeanor and knowledge of the trade; given that the trade is murder, the ease with which an ex-cop and veteran can pick it up doubles as political commentary.

Early-season Breaking Bad antagonist Tuco Salamanca returns as well, following his appearances last year. As played by Raymond Cruz he remains a fireplug of a man, a guy who has that “you wouldn’t be the first person I’ve beaten to death with my bare hands, and you won’t be the last” look in his beady eyes. It’s he whom Nacho, his intelligent and ambitious young associate, needs eliminated, lest he find out about his underling’s unauthorized entrepreneurship. There’s a more surprising cameo in this sequence, though: furniture-store employee Domingo Molina, aka future mid-level meth distributor and Walter White murder victim Krazy-8. Saul doesn’t do this sort of easter-egg stuff very often, which is good: It means I cheered when I figured out where I’d heard of Tampico Furniture before, instead of rolling my eyes at a predictable callback to the previous show.

The main attraction here is Mike himself, of course. After methodically debunking Nacho’s supposedly can’t-miss plan for assassinating Tuco up close, and rejecting his own alternative plan to kill him with a sniper rifle after memories of ‘Nam sour him on it, Ehrmantraut comes up with a third option: anonymously call the cops about a fight, then proceed to pick it, so the cops arrive just in time to see Salamanca pounding the shit out of an old man. Mike proves both able to withstand a beating—he quickly disarms Tuco, grabs him with an iron grip, and braces himself against a nearby post to keep from going down—and, judging from his uncharacteristic grin and “that all you got?” taunt, proud of it as well.

This is really what grabs Nacho’s attention. When the two men meet later on for Mike’s payment, Nacho marvels at the success of Mike’s idea, but points out how much easier it would have been to blow Tuco’s brains out from a distance and have done with it. “Just saying you went a long way to not pull that trigger. Why?” he asks. Mike says nothing, which is probably the best answer he could have given; Nacho is no wet-behind-the-ears Jesse Pinkman, but simply by asking a question unnecessary save for genuine curiosity he shows he’s intrigued, and perhaps even impressed, by this strange old man. Once again, actor Michael Mando imbues Nacho with a fluid presence that enables the character to transcend any minor-gangster cliches; there’s more going on in the way he folds his arms as Mike pulls away than many such characters can muster in an entire episode. Chuck and Jimmy vs. Mike and Nacho—that’s a fair fight. 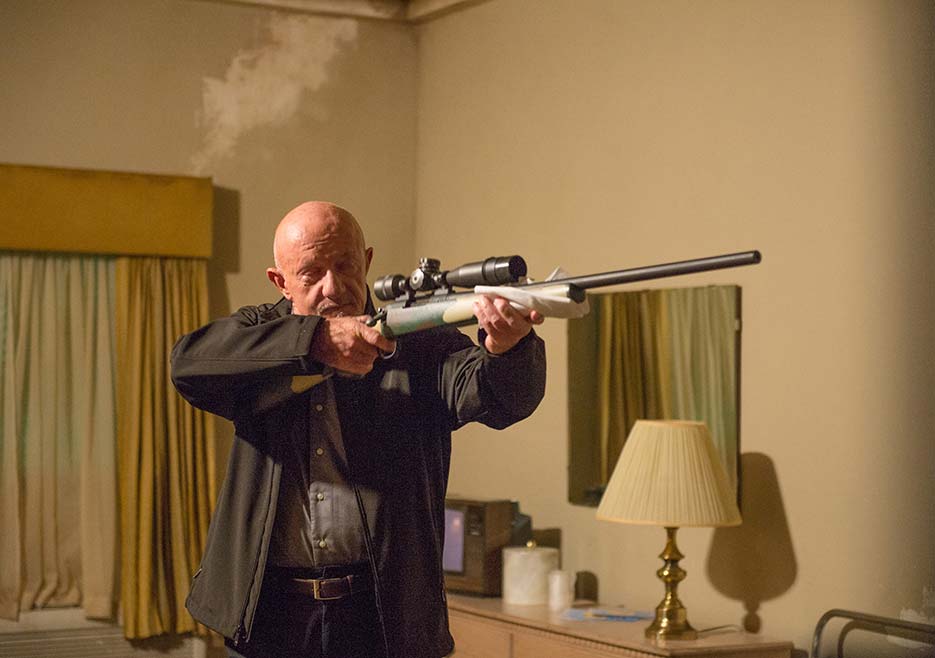