The Jimmy half of Better Call Saul is very good, sure. But the Mike half of Better Call Saul feels like the onset of a panic attack. You can feel it creeping up on you like have your back turned on a menacing stranger, one who’s tracked you down and is walking his way toward you, quiet and full of bad intent. Certainly that’s how I felt as I watched the final scene of “Rebecca,” this week’s episode. As Mike Ehrmantraut sat with his back to the door of his favorite diner, Hector Salamanca materialized from the debris where Breaking Bad left him to gently request that the ex-cop help get his nephew Tuco off the hook. Nothing overtly threatening about it, of course, no visible stick to go with the carrots of a kindly disposition and a bribe of $5,000. Tio Salamanca doesn’t even bat an eyelash when Mike parries back his blandishments with deadpan disinterest: “You see what I’m getting at?” “Not really.” “I would like for you to tell the police that the gun was yours.” “Would you.” No, all the menace comes from the implications of putting these two men, these two murderers, in close proximity. We know where their stories end up, but that does nothing to lessen the tension. Rather, our knowledge increases it, investing the current moment with our foreknowledge of all the awful moments to come.

It’s so successfully harrowing, in fact, that it’s almost a shame. I mean, if it weren’t for the tightness in my chest and jaw and the butterflies up and down my nervous system when the closing credits rolled, I might have been able to write a review that barely mentioned Mike at all, instead focusing on some of the strongest Jimmy-centric stuff on offer all season, even if Jimmy himself played a comparatively minor role. Visually alone, this episode called to mind the stark, geometric shot compositions of the first season. Is any show on TV other than Sesame Street this fixated on shapes? Think of Kim Wexler and her neat row of post-it notes, each one a brightly colored square affixed to a rectangular pane of glass as she desperately tries to play rainmaker. (This scene gets an aural remake in a later montage showing Kim warrened in every nook and cranny of the office, making phonecall after failed phonecall to prospective new business while the Gipsy Kings’ cover of “My Way” plays in its entirety; it takes guts for a show to be that ostentatious about doing basically nothing for minutes on end.) Think of that long diagonal shot of the men’s room at the county court, arranged to emphasize the distance between sad-sack Jimmy and his fawning former colleague. Think of the narrow horizontal framing of Kim walking into the HHM parking garage to take the call that could turn her career around—she’s boxed in, but behind her are two huge circles that symbolize mobility, and over her head is a sign that reads “Out” with an arrow pointing her way forward. Think of Kim and Howard walking down HHM’s enormous diagonal staircase into the lobby to meet with the local bank execs whose business they hope to land, then contrast it with the two of them standing in front of the squares and rectangles of HHM’s glass front doors as Howard informs her she’s still doomed to document review. Think of Kim and Chuck, dwarfed by the massive, almost movie-screen-sized windows of the pre-dawn office, as Chuck tells her the story of how Jimmy quietly, almost unwittingly bankrupted their corner-store-owner father. “My dad wouldn’t hear it,” he says of the old man’s reaction when he revealed his kid brother’s treachery. “Nope. Not his Jimmy!” This against a backdrop that emphasizes the story’s enormity, and renders the teller tiny and powerless compared to all he’s up against.

This wasn’t the only information revealed about the Brothers McGill this episode, though. In the opening scene, we discover Chuck was once married to a violinist named Rebecca, whose reaction to her first encounter with Jimmy was far too favorable for Chuck’s liking. He resents his kid brother not just for breaking the rules when it suits him, but for the way people love him for it, when it’s his duty as the family member most likely to have to clean up after him to love him despite it. We also discover, in a scene where only Chuck and Howard are present, that McGill really doesn’t have anything to do with Kim’s banishment — it’s all Hamlin, played here at his chilliest by Patrick Fabian. He’s so outraged at being made to look foolish for supporting Jimmy that not even Kim landing a whale will get her back in his good graces. “You don’t save me,” she told Jimmy earlier in the episode. “I save me.” If only she’d talked to Mike, she’d learn where self-reliance gets you in the end. 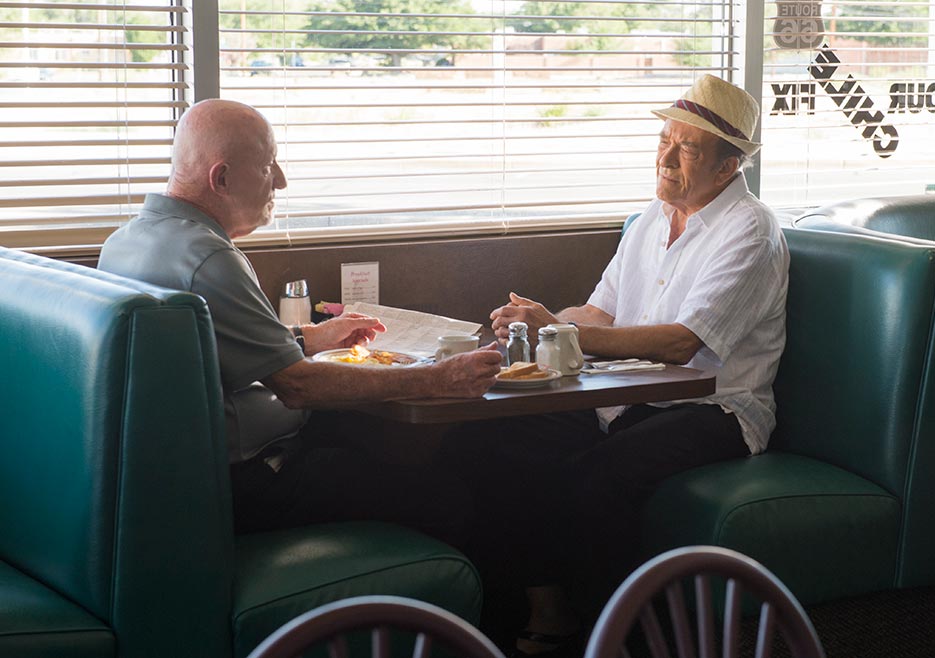