This column is not about the increasingly ugly primary battle between Hillary Clinton and Bernie Sanders, though I’ll forgive you if you assume otherwise. Because of her loud championing of her husband’s policies during his presidency, and because she used her role as first lady as an argument for her own experience in her successful United States Senate run, Hillary Clinton’s reputation has been inevitably caught up in the legacy of her husband.

The fairness of discussing the various dimensions of Bill Clinton’s administration—whether as a form of praise or criticism—has been a percolating controversy throughout a primary battle that frequently seems to be about everything but policy. I have no interest in prosecuting that case here. I fear, in fact, that the debate about the intertwining legacies of the Clintons risks obscuring a point that must be grappled with by everyone to the left of center: Bill Clinton’s presidency was a disaster for progressives, for the constituencies they speak for and the country writ large.

This is not a popular point of view. Mr. Clinton has continued to enjoy high favorability ratings in the decade and a half since he left the White House. He makes frequent public appearances, earns sky-high fees for speeches and directs the powerful and well-moneyed Clinton Foundation. Few ex-presidents have had a more enjoyable—or profitable–post-executive life.

Yet this popularity is bizarre when we consider the consequences of his policies.

We’re living through a great national reckoning on our country’s vast inequalities—racial, economic, and otherwise; the Clinton administration inarguably contributed to those inequalities. His welfare reform bill, which he and his administration championed relentlessly, undercut the economic security of millions of Americans. Extreme poverty among African-American families doubled, even though welfare spending did not fall dramatically, as the onerous new requirements of the bill required attendant higher administrative costs that undercut the assumed cost savings. And the bill severely altered the standard Democratic attitude toward the social safety net. In their zeal to be good members of Team Blue and support the legislation, Democrats began to embrace ugly concepts like “welfare queens” and “deadbeats.” Our national conversation about how to help the worst off has not recovered since. Yet as late as 2006, Bill Clinton was publicly defending the bill as a beneficial change.

Bill Clinton’s legacy is defined by his full-throated rejection of the left as an important constituency within the Democratic Party.

We are finally, as a nation, starting to grapple with our massive incarceration problem. The numbers are staggering, with the United States currently jailing people at a greater rate than the Soviet Union did during the height of the Stalinist purges. This incarceration problem, of course, falls unequally along racial lines, even as it devastates families of all races. Both parties have begun to reckon with the immense damage this condition has done to our country—the disruption of family units when parents are separated from children, the lifelong damage imprisonment does to a former prisoner’s job prospects, and the way disenfranchisement of felons removes them from the political process. Yet the Clinton administration, still looked back on with fondness by many self-identified progressives, was firmly on the wrong side of history. The Clinton crime bill exacerbated all of the wrong trends in over-incarceration, significantly increasing the number of Americans locked up in federal prisons. True, this only represented a small slice of the overall problem of America’s overcrowded jails. But a September 2014 report from National Public Radio argued that the Clinton Crime Bill deepened racial inequalities in the criminal justice system and contributed to harsher penalties and longer jail sentences, further overcrowding our prisons and making them even less racially equitable. And as with welfare reform, Mr. Clinton’s actions and rhetoric enabled Democrats to move decisively to the right on this issue, leaving the national conversation completely unbalanced, with both Democrats and Republicans alike pushing for harsher sentencing and more people in prison. It will take generations to fully undo this damage.

In foreign policy, Mr. Clinton receives praise for leading during a time of relative peace. In part, this amounts to giving him credit for events that he could not possibly have contributed to; with the end of the Cold War happening during his predecessor’s administration, he naturally inherited the presidency facing less immediate danger of war. His actual record is not impressive, if we value the lives of people in other countries as highly as we do those of American citizens. After all, the Clinton administration instituted harsh economic sanctions on Iraq. These sanctions were notoriously ineffective at actually pressuring Saddam Hussein’s regime. Instead, they caused enormous hardship to Iraq’s citizens, resulting in the death of hundreds of thousands of children from malnutrition and lack of medicines, according to even conservative estimates. Meanwhile, the United States lost its best chance to deal with the threat of Osama bin Laden, in part because Mr. Clinton’s attention was diverted to the Monica Lewinsky scandal.

As University of Michigan professor Juan Cole has argued, the Lewinsky scandal helped contribute to a political environment in which Republicans blocked Mr. Clinton’s efforts to pursue bin Laden and questioned the motives of those efforts. Mr. Cole pins this blame squarely on Republicans, but the fact remains that this condition was made possible by a flagrantly inappropriate relationship between the most powerful man in the world and a 22-year-old intern.

Even Mr. Clinton’s oft-celebrated economic credentials seem far less impressive when put under scrutiny. To begin with, some have pointed out that people languishing in prison do not factor into the unemployment rate or income statistics. Having presided over a massive increase in incarceration rate Mr. Clinton’s supposed economic miracles necessarily look less rosy. More importantly, there’s the question of the nature of the source of economic growth in the Clinton years. Having pushed for and signed NAFTA, Mr. Clinton watched as more than 650,000 jobs eventually moved overseas due to the trade agreement, according to the Economic Policy Institute. The problems associated with offshoring could have been ameliorated with a stronger safety net, but Mr. Clinton would instead go on to undermine that safety net in the previously mentioned welfare reform bill. Growth remained strong despite flat-lining wages for ordinary Americans. Why? In part, through the inflation of unsustainable bubbles. First, the dot-com bubble collapsed at the tail end of the Clinton presidency, which contributed to the early 2000s recession. This could not fairly be ascribed to the Clinton administration, but it does undercut the claim that Mr. Clinton contributed to a fundamentally strong economy.

Much more devastating, however, was the Clinton administration’s culpability in the unprecedented financial implosion of 2008 and 2009. By pushing for and winning deregulation of speculative financial assets, the Clinton administration surely deepened and expanded the crisis. While Wall Street was engaged in the development of exotic derivatives prior to the passage of the administration-supported Commodity Futures Modernization Act of 2000, this legislation opened the door to the kind of Wild West of financial instruments that led to the most devastating employment depression since the Great Depression. Mr. Clinton cannot fairly claim to have had no warning of these potential events, either, as the chair of the Commodity Futures Trading Commission, Brooksley Born, argued strenuously about the dangers of unregulated derivatives. Mr. Clinton and his economic team ignored these warnings and in doing so contributed to the future economic carnage of the financial crisis.

But beyond any particular policy, Clinton’s legacy is defined by his full-throated rejection of the left as an important constituency within the Democratic Party. Though Democrats had tacked right since the dawn of the Reagan revolution, no individual politician better exemplified this anti-left tendency than Mr. Clinton. His infamous “Sister Souljah moment,” in which he loudly disavowed a radical black musician, was just one symbol of a far broader rejection of the left and its core constituencies. The concept of “triangulation”—beating Republicans at their own game by moving the Democratic Party to the right—has infected the party’s institutions, creating a deep and durable bias toward centrism and against left-wing reforms. It’s my belief that this wholesale abandonment of progressive principles during the Clinton administration directly contributed to the various horrors of the Bush administration; with the left wing having long since been marginalized within the Democratic Party, there was no way to present a meaningful alternative to voters when such an alternative was desperately needed.

This question is not academic. Our understanding of Bill Clinton and his destructive administration directly informs our concepts of what the Democratic Party is and stands for. Without facing with this recent past, we risk failing to chart a more just and equitable path going forward. Whoever wins the primaries and the presidency this year, the ugly legacy of Clintonism will have to be continually confronted in the years ahead.

Correction: A previous version of this article incorrectly stated that Juan Cole blamed Mr. Clinton for the Lewinsky scandal rather than Republicans. 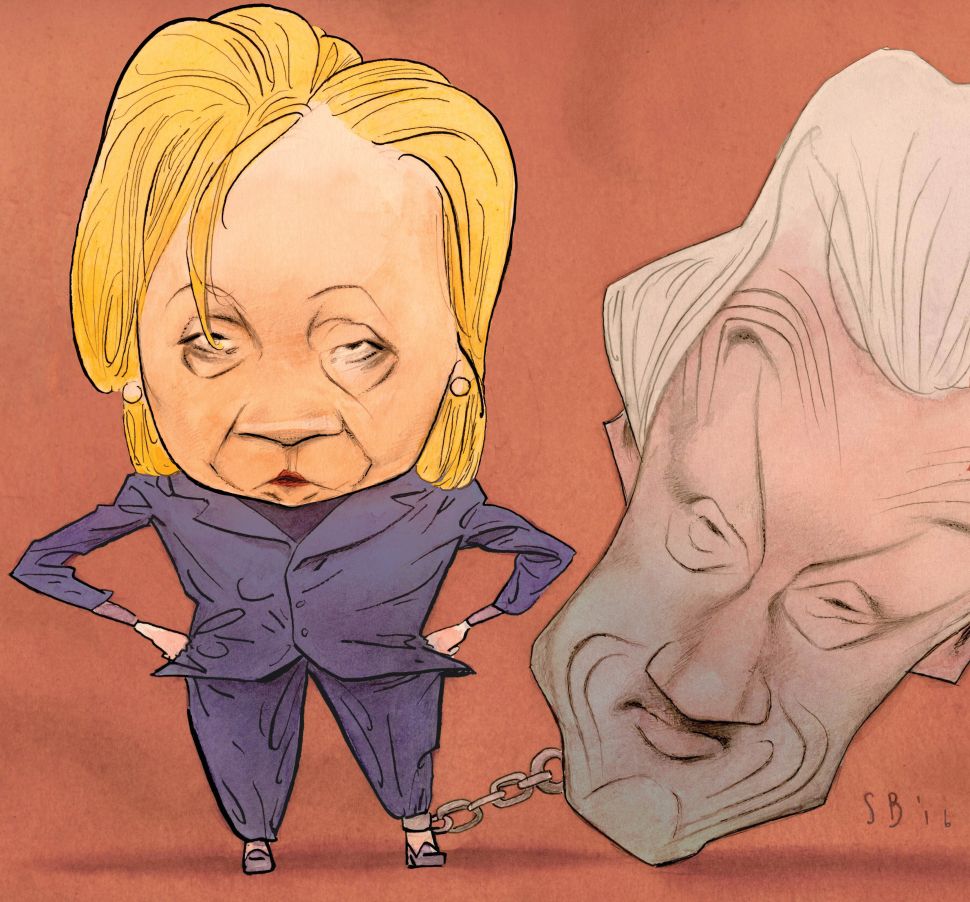