New York Mayor Bill de Blasio is America’s leading progressive populist mayor who combines a powerfully reformist political philosophy with a need to govern the city that never sleeps with a strong hands-on leadership every hour of every day.

While he has ably managed city government and superbly led New York during significant terror threats, Mr. de Blasio has earned a prominent role in the pantheon of national progressive leaders alongside Senator Bernie Sanders, Senator Elizabeth Warren, Senator Sherrod Brown and former and hopefully future Senator Russ Feingold of Wisconsin, among others.

What has made Mr. de Blasio so valuable to the city he leads and Democrats nationally has been his ability to stand for high ideals in the tradition of leaders named Roosevelt and Kennedy, while administering an apparatus of the world’s largest municipal government on a daily, hands-on basis.

The late former mayor John Lindsay, who I was privileged to work for as a very young man, once said that being mayor of New York is the second toughest job in the nation. How right he was!

As the political eyes of the nation soon turn to New York for the April 19 presidential primary the mayor will assume a vital role that will continue through the Democratic National Convention and the general election in November, and beyond.

Regarding the two leading Democratic presidential candidates, my long held and often stated view is that Hillary Clinton is superbly qualified to be president while Mr. Sanders is the progressive conscience of the Democratic Party whose leading role in national politics has only begun.

He is a genuine and influential progressive leader who has earned great respect.

Let me also repeat here my long held and often stated hope that both candidates will campaign by offering a positive vision for the future. Fair and constructive criticism between the candidates is right and proper so long as the tone is respectful and civil and the purpose is to achieve the maximum possible progressive reformation of America, which will ultimately require a united front among Democrats and electing more progressive Democrats to the House, Senate and statewide office.

The nomination by Republicans of Donald Trump could bring Armageddon for what progressives stand for, but it also creates the possibility of a landslide victory for Democrats and progressives with both Mr. Sanders and Ms. Clinton running far ahead of Mr. Trump in polls.

Those of us who are progressive and populist are outraged the obstructionist efforts of Republicans in Washington to prevent the confirmation of a new Supreme Court justice and force a government shutdown of a Supreme Court that will be gridlocked by 4-4 votes on crucial matters of justice in America.

Few issues are more important to the future of the nation than the battle for the future of the Supreme Court, which could define the course of justice in America for a generation. On this great matter there is complete agreement between Ms. Clinton and Mr. Sanders for one historic direction, and complete agreement between Mr. Trump and Ted Cruz for the opposite—and in my view catastrophic—direction for the rule of law.

In a similar vein Democrats can witness the GOP campaign between two extremist candidates, Mr. Trump and Mr. Cruz, either of whom would take America on what we progressive populists believe would be a dark and dangerous path.

As the Democratic campaign reaches New York, and then the national convention, and then the general election Mr. de Blasio can, should and I believe will play a critical role. He is a genuine and influential progressive leader who has earned great respect from progressives in what we might call the Sanders-Warren wing of the party while he is a long-time friend, former campaign manager and supporter of Ms. Clinton.

Let’s remember that great progressive presidents such as Franklin Delano Roosevelt and John F. Kennedy had to build politically winning and governing coalitions. As Democrats in 2016 seek to build a coalition that can win the general election and lead the nation with a successful progressive governing coalition, Mr. de Blasio is positioned to play a central role.

Leading progressive voices such as Mr. de Blasio, Ms. Warren, Mr. Brown and Mr. Feingold have great moral credibility with Mr. Sanders and his supporters and substantial governing and political clout with Ms. Clinton and her supporters. They can light the flame of the progressive movement—and I deliberately use the word movement—while bringing the Clinton and Sanders campaigns and supporters closer together behind a progressive platform seeking a mandate to govern and the ability to govern.

No mission is more important to the achievement of progressive goals than the election of more progressive Democrats to the House and Senate.

The future of America can be viewed as two alternate universes, to use a concept of theoretical physics.

One universe would be the election of an extreme Republican president with the continuation of a Republican Congress with the power to create a conservative Supreme Court majority to thwart justice in America for decades. The other universe would be the election of a progressive Democratic president with a mandate large enough to create a Democratic majority in Congress and a liberal Supreme Court that would empower a new commitment to justice in America for decades.

Every progressive populist should go to sleep at night dreading the prospect of a Trump or Cruz presidency, but also dreaming of the prospect of a Democratic president and Congress and liberal Supreme Court majority.

For these reasons I have proposed that whoever is nominated for president—leading progressive Democrats such as Mr. Sanders, Mr. de Blasio and Ms. Warren—unite behind what I call a People’s PAC to raise huge amounts of good clean money from large numbers of small donors. President Obama began this vision in 2008 and Mr. Sanders elevated it to new and spectacular heights in 2016.

The sky is the limit if the progressive cause becomes a continuing, lasting and powerful movement that can elect essential progressive Democrats and ultimately realize the campaign finance revolution Mr. Sanders champions and Ms. Clinton supports—ending the scourge of corruption brought by the five conservative men of the Supreme Court in its heinous Citizens United decision and replacing it with campaign donations that are of, by and for the people.

Mr. de Blasio can play a crucial role in the unfolding drama of choosing America’s next leader and deciding the course of America’s future. As the primary campaign soon shifts to New York, the man and the moment will come together which is great news for Democrats, America and the world. 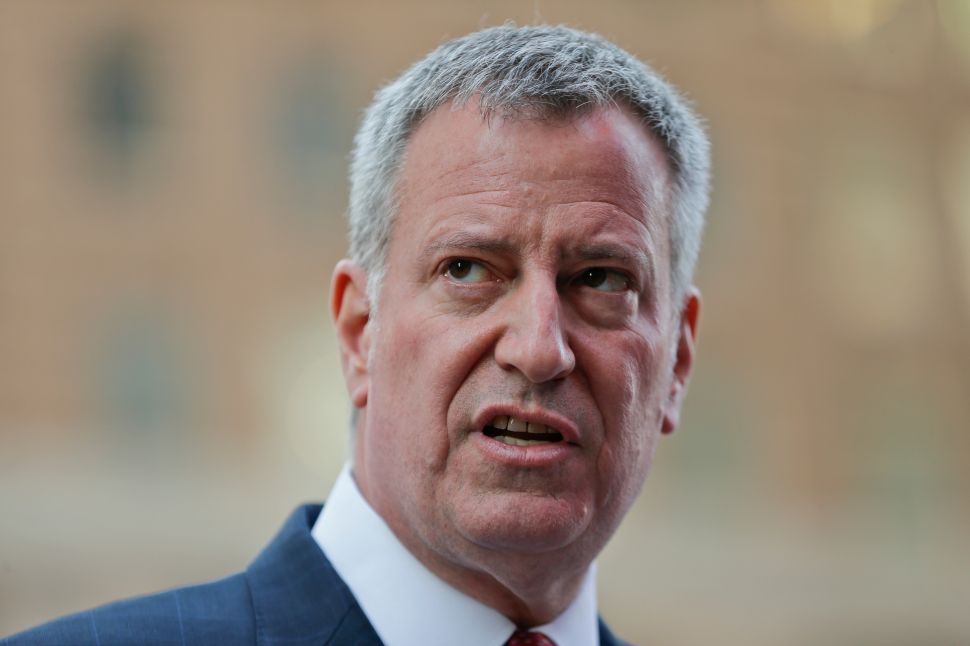