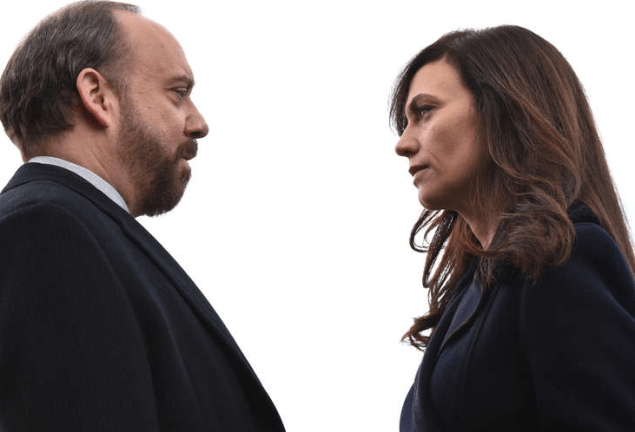 There are all kinds of reasons why last night’s episode of Billions was the show’s first unmitigated artistic success, so naturally I’m going to start with the most minor and incidental: It quoted The Big Lebowski. And not in the way it usually quotes the touchstones of guy-beloved cinema, either, with one of the series’ machismo-obsessed characters calling themselves Keyser Soze Motherfucker or whatever. This was an honest-to-god homage in which it seems that they called one of their supporting characters Donnie just so they could refer to the beauty of nature “he loved so well” at his funeral, just like Walter Sobchak did when bidding Steve Buscemi’s character Donnie adieu in the Coen Bros. comedy classic. Shit, they even named this Donnie’s husband Walter! Any knucklehead could have had Wags or Axe or any of these other goons shout “this is what happens when you fuck a stranger in the ass” or whatever, but it took real planning and a considered affinity for the material to work in a reference to Donnie’s gallows-humor funeral scene in a gallows-humor funeral scene. I didn’t know Billions had it in ’em!

And that’s not nearly all it had it in this week. “Quality of Life” was also the show’s most structurally ambitious episode to date, a far better use of shifting time frames than the Axe-and-Wendy-in-a-hot-tub flash-forward from a few weeks back. Using the funeral of Donnie Caan as a centerpiece, the episode spins backwards, forwards, and sideways in time, tracing the whole secret history of both the illness that left him coughing up blood during last week’s cliffhanger and killed him this time around, and his collusion with Bobby in pulling one over on Chuck Rhoades and the feds. Turns out those two secret histories were way more intertwined than anyone knew—even Donnie, as it turns out. Sensing that his colleague was seriously ill, Axelrod devised a plan: He’d use Donnie as a decoy for Rhoades’s oncoming investigation, deliberately handing the government an informant with an expiration date. In exchange for playing along, the struggling trader stood to earn $40 million to leave behind to his family. Like the initial reveal that Axe and Donnie were in cahoots, this is a jaw-dropper—even more so, though, considering the lethal ramifications. And when we learn at the end of the episode that Axe encouraged their mutual doctor not to divulge the existence of a trial treatment that could have extended Donnie’s life long enough for him to be forced to either testify or reveal the ruse, boom, Bobby Axelrod has his first full-fledged villain moment. Perhaps because he’s played it relatively straight so far, it feels awful, like Walter White’s first kill without the excuse of desperation.

It’s also a killer contrast with the other two master plans put into motion this episode. On Bobby’s side, he utilizes the dismissal of charges against his big-shot bigamist lieutenant Dollar Bill Stearn to slide the semi-disgraced trader into the company set up by a trio of defectors last week in order to feed them bogus information. Their staged argument within Axe’s soundproof office, in which they act angry while they shout compliments at one another in order to give the ruse cover, was the show at its funniest: “You’ll have so much money you can start a third family!” “Two’s plenty!” Axe takes particular delight in the comeuppance he delivers to the so-called “quislings,” instituting a one-sided deal to save them from a disastrous investment that leaves them essentially his indentured servants. You’re left simultaneously admiring Axe’s evil genius and marveling at how anyone would be so addicted to this business as to take the deal instead of walking away with what’s surely still a small fortune and taking up gardening or something.

Chuck gets in on the scheming action, too, by taking out the judge that set Dollar Bill free in the first place. Last week he and Lonnie Watley, the professorially coiffed staffer he previously crewed over to maintain control of the Axelrod case, patched things up when he gave Watley the go-ahead to investigate the conservative jurist (played by E.R.’s Anthony Edwards) for discrepancies in his sentencing. Turns out he’s not just racist, doling out far longer jail times to blacks and latinos than to whites—he’s getting paid to do it, via a stake in a privately-owned prison corporation. Chuck tells the judge to quit immediately to be spared the Eastern District’s wrath—then springs the Southern District, about which he made no such promises, on the asshole in the middle of “For He’s a Jolly Good Fellow” at his going-away party. If you don’t cackle with delight at that kind of thing, I don’t know what to tell you. That the judge’s departure sets up a potential domino effect in which various key players can be moved out of Chuck’s way and into slots that will benefit him on his journey up the ladder, so much the better.

There’s more than manipulations, though. Revealing character moments abound: Donnie telling Bobby he basically let his ex-wife take whatever she wanted during their divorce since he felt so bad that accepting who he was cost her the life she thought she had; Lara Axelrod becoming increasingly strident and way less workin’-class shanty-Irish salt of the Earth as she begins to get paranoid about Wendy (dropping lines like “That’s what Axe Capital is: a family” and “it made me wonder about her continuing value”), even as she doubles down on meaningless gestures like making her sons hand-wrap Secret Santa gifts for the less fortunate; Wendy slowly wising up, via conversations with Walter and Wags, that there was more to Donnie’s death and his simultaneous role in her husband’s investigation of her boss than meets the eye, even as she blows up at said husband for showing up at the funeral in the first place. For the first time, Billions’ billions of moving parts all felt like they were moving, with purpose, in the right direction. Suddenly I’m bullish on this one. 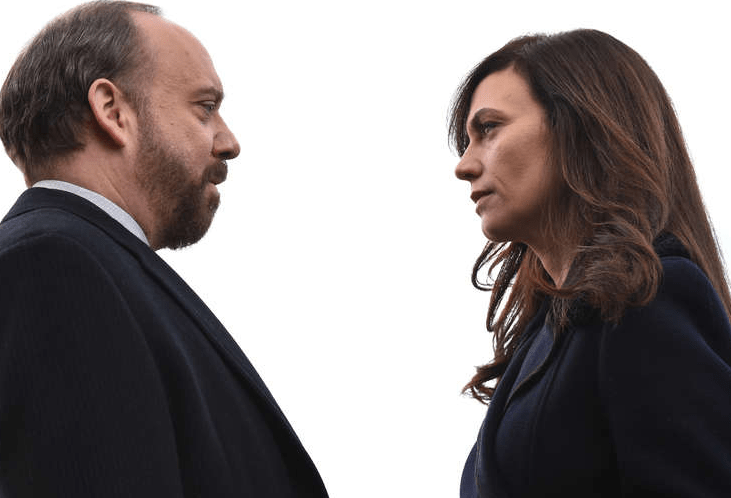