Where are Chuck and Wendy Rhoades’ kids? They’re around after school, or so we’ve been told. Their paintings decorate the walls of the Rhoades’ kitchen. IMDB says they’ve been cast, which probably means we actually saw them for a scene or two already. But in an episode so focused on how the behavior and fortune of Bobby and Lara Axelrod affects their children, the on-screen absence of the Rhoades rugrats feels like a deliberate and pointed omission. For all that Chuck sees Bobby as a monster fucking the masses out of their just rewards, only one of those two men spends time with his family.

The question of “The Punch,” this week’s episode of Billions, is whether that difference actually makes a difference. Bobby begins the episode by tracking down and decking a neighbor who drove his children home from an arcade drunk, then spends the rest of the hour frantically trying to fend off both the legal ramifications and Lara’s attempts to stop spoiling them. Bobby wants them spoiled, wants them to enjoy the benefits of the carefree life he struggled to provide them, one neither he nor Lara experienced growing up. And while he’s embarrassed about his assault on the DUI dickhead, that’s outweighed by his love of being seen by his kids as a protector. Look no further than his midnight “rescue” of the boys from the tough-love outdoor camp Lara sent them to for proof of that. In that light, Axe’s ability to spend time with this children is hardly a blessing.

Ironically, he could be raising the next Chuck Rhoades. The crusading attorney, after all, comes from their exact same circumstances: raised by a Wall Street titan whom he still loves and is close to, but whose unscrupulous behavior ultimately turned his stomach so much that he chose a career putting guys like his dad in prison. The problem here is that Billions doesn’t seem sure exactly how that plays out in his life from day to day. Initially, Rhoades’s white-hat rectitude (his irritable temperament and occasionally grudge-holding notwithstanding) was refreshing: Here, all but alone in prestige(ish) drama, was a power broker using his power wholly responsibly, and for the common good. Now he seems to be straying from that path, breaking rules left and right as he pretends to recuse himself from the Axe Capital case only to literally hide in closets to spy on his underling Bryan’s meetings with a confidential informant. He touts his willingness to “stare into the abyss,” to “go beyond conventional morality,” to even the playing field for the little people Axe and his ilk exploits, but if true that’s a pretty sudden development; nothing we’ve seen him do until now goes beyond traditional law-enforcement hardball. In this particular episode this involves leaning on Bryan to lean on the C.I., the milquetoast mid-level trader named Donny whom Bobby had earlier tapped for a big score in order to boost his confidence. “It makes me sick to sell out the man who gave me everything so I can be with my family” he spits at Connerty, voice wavering. (There’s that family business again.) “So if that’s not good enough, you can go fuck yourself!” Chuck’s implication appears to be that unlike Bryan, he’d punish the guy for his insolence, or push him even harder to produce the evidence they need. But this isn’t exactly abyss-gazes-also stuff.

Chuck’s views of love and sex seem equally confused at this point. He’s rightfully, righteously furious at his SEC counterpart Spyros for having raped a colleague years ago, having immediately seen through Spyros’s claim it was consensual—but he never brought this up until it was necessary to do so to muscle the man back out of the Axelrod case, and in so doing he took advantage of the victim by bringing her into the office for a fabricated job interview just so her attacker could catch a glimpse of her and panic. And he seems almost as repulsed by the overly attached couple with whom he and Wendy go out on a double date as he is by an out-and-out rapist, scoffing at the idea that after 17 years of marriage, anyone could stand making “googly eyes” at their spouse at work all day, then coming home and fucking. Wendy responds by slapping him silly, and the next morning she awakens surrounded by S&M gear; presumably, this is their happy medium between sappiness and slow bed death.

But it may not cut ice for much longer. Wendy seems more than professionally intrigued by Chase Kendall, the handsome headhunter (and supposedly awesome lover, according to the friend who sent her his way) who in turn has clearly taken a more than professional interest in her and her career. It’s also worth noting that when Chuck sits on the bed after Wendy slaps him, awaiting her return with the usual instruments of pleasure and pain, a quick cut to the Axelrod house literally puts Lara in the spot Wendy had just vacated, implying that she and Bobby have the closeness Chuck and Wendy are beginning to lose. Billions’ biggest stumbling block remains how hard it is to get a handle on who these people really are — not the stuff they do, or the stuff that makes them good at the stuff they do, but how they think and feel when they’re not doing the stuff they do. It’s possible that pushing the Rhoadeses apart might give us some insight in that area. But it’s just as possible that our current lack of insight, which this episode did not lessen, will make a split impossible to care about. 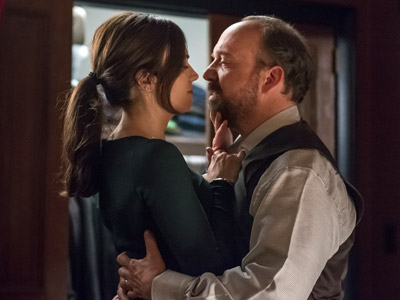