Billions is a cat-and-mouse game in which both participants are 100% sure they’re the cat. And why shouldn’t they? They’re usually right. Bobby Axelrod is so perspicacious about both the market and the people who work in it that his employees talk about him like he’s a supernatural entity. Chuck Rhoades, meanwhile, puts it best himself in this episode when he proclaims “I know how to win”; he never moves on a case until he can dunk on his opponent like Darryl Dawkins. Watching them maneuver to stay two steps ahead of each other—and three steps ahead of the audience—is usually the highlight of the show, particularly when these maneuvers are edited to feel like sequences from spy thrillers. So the series’ ability to make suspenseful television out of subpoenas and stock trades has never been in question.

The question, rather, was why anyone should give a shit—until last night, anyway. “Boasts and Rails,” this week’s episode, was the first time one of Billions’ taut games of cops-and-robbers revealed the character of the people involved, instead of eating up screentime, however entertainingly, that would have been better used for that more important purpose.

The contours of the plot are easy enough to grasp (although somewhat less so to type out). Chuck’s right-hand man Brian Connerty has flipped a milquetoast trader named Donnie against Axelrod, but Donnie’s not giving up the goods, despite his (apparent) best efforts—he’s just not temperamentally suited to being a rat. So when a spy that Axe’s fixer Hall has placed in the U.S. attorney’s office relays the existence, but not the identity, of said rat to Axelrod, resulting in a string of tirades and interrogations, Brian’s afraid Donnie will either fold or be found out. Chuck suggests serving Axe a sacrificial lamb by framing an innocent employee as an informant, so that the real informant can skate by unscathed. Brian’s reluctance—he’s doing this job to make the world a better place, after all—is shored up during a dinner with his increasingly friendly underling Kate Sacker’s dad, who challenges him harshly on unscrupulous behavior in pursuit of justice. When Brian tells Chuck he won’t go through with the plan, Chuck moves to replace him on the case and even takes an interview for a job in the private sector, as per an earlier deal with Wendy where she’d quit her job if he did too. Sure enough, Chuck’s worries seem valid: Donnie handles himself abysmally while being questioned by Axe, and Hall’s men are tailing him, so it’s just a matter of time before it’s all over. Indeed, Hall digs up the damning info and presents it to Bobby…only for Bobby to fire not Donnie but Pouch, another timid figure whom it quickly becomes apparent was the person Brian framed after all. Given the time this happened—mere hours after reporter Mike DiMonda broke the story that Axelrod was slated to be fired on 9/11, which is what caused his absence from the office and gave him the chance to make $750 million by shortselling aviation and the like while his partners burned to death, facts he refuses to fudge or deny—it felt perfectly plausible that the usually razor-sharp Axe and his team would fall for the ruse. For his part, Chuck takes Brian out to get rip-roaring drunk, the best way he knows how to get over the ends-justify-the-means guilt. But in the final scene, we discover that Bobby’s had the last laugh: He knows Donnie’s the real informant, and he’s cooperating with Donnie to use him as a double agent and feed the Feds bullshit. Aaaaaand scene!

So yeah, it’s a Russian nesting doll of doublecrosses and reversals and fakeouts, and it’s a delight to see each layer taken apart. But this is an almost incidental pleasure compared to what we learn, through word and deed, about Chuck, Wendy, Axe, Donnie, Brian, Sacker, DiMonda, you name ‘em. Finally, we’re starting to see who these people are, via a tale of intrigue that shows us what they do when they feel backed into a corner. What’s important to them? What are they willing to sacrifice, and what do they want to hold on to? How do they treat the people closest to them when the chips are down? Anyone who’s ever watched an action movie knows that this is the stuff the metaphor of violence is intended to reveal. All the crimes here are strictly white-collar, but they’re no less illuminating of human nature if deployed correctly, and correctly is how they’re deployed.

Coincidentally or not, this was the first episode of Billions to feature dialogue I’ll remember after the closing credits roll. Hall to Axe when they uncover Pouch’s alleged treachery: “Don’t be surprised. On a long enough timeline, everyone you know will turn against you.” Chuck to Wendy, after she snaps at him for grousing about Axe: “Sometimes I wish I were your patient, because then maybe I would get a sympathetic ear every time I’m not my absolute best self 24 hours a day.” Chuck to Brian on framing an innocent man: “There are no innocent men. Not on Wall Street.” Alternately aphoristic and insightful, and occasionally both, a few more lines like these per episode would do wonders for Billions, which has been both smart (most of Chuck and Wendy’s discussions of their imperfect but happy partnership-of-equals marriage) and spectacularly stupid (that horrendous dogshit speech from early in the run) in dialogue-driven scenes.

Will it ever develop into a great show, though? I mean, who can say. There’s still something ersatz about it, perhaps because of how many cast members hail from other, better prestige-drama shows; Halt and Catch Fire and The Leftovers both grew enormously over time, but neither show had the supergroup cast that this one does, which makes its disappointments keener. But a few more episodes like this and the show will be too entertaining to be disappointed about. 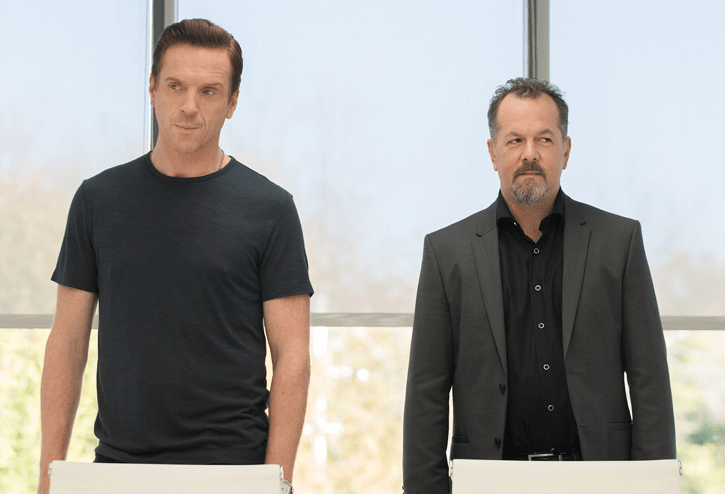