On this week’s episode of Billions, someone spraypaints “FUCK YOU PIG$” on Bobby Axelrod’s car, which is the least any right-thinking person could do. He and his wife Lara and his henchmen Wags and Hall and even his enemy Chuck Rhoades can quibble about the legality, but the fact of the matter is Axe had the sangfroid to make himself rich while nearly everyone he knew roasted alive and the world turned upside down on 9/11. What a horrible, upsetting, frightening incident it must have been for him to have this pointed out in graffiti on his luxury car! What quick thinking to call one of his many servants and instruct them to bring one of his other luxury cars to replace it before his beloved children could see!

If anything, “Where the Fuck Is Donnie?”, last night’s ep, underestimates how deeply, deeply satisfying it is to watch these smug rich bastards get their comeuppance. By all means, vandalize their car. Picket their office and throw shit at the people who pop out to shout insults back. Shut down their fancy-pants expensive-hobby restaurant and tear up their artisanal organic tax-dodge farm. We are under no obligation to believe, as the Axelrods seem to, that this is an existential crisis for them; their unimaginable wealth insulates them from actual consequences in a way that’s unimaginable to people whose yearly salaries are substantially less expensive than the weird cold-air bath machine Axe uses to psyche himself into stealing more millions. The very least they can do is suffer some inconvenience and humiliation, since economic justice remains a total pipedream.

In fact, the weird thing about the episode is how much less sympathetic the Axelrods become when we’re asked to sympathize with them. Up until now, one of the show’s unique qualities was how neither Axe nor his opposite number Chuck were really so terrible, in the grand scheme of things. Bobby’s no more or less corrupt than anyone else in the hedge-fund game, he’s simply better at playing it. Ditto Rhoades and his play-to-win attitude: He plays hard, but he doesn’t cheat. In theory this would make watching the Axelrods get shit on by cops and firefighters and Occupy protesters and what have you feel gratuitous. Instead, it simply makes you pull for the people trying to take them down a peg, since you finally realize just how many pegs up they are, and how smug they are about their perch up there. Lara found 30 pieces of silver in the mud of her ruined farm? Bobby has to cop to being a shitheel in front of the boys from the FDNY? Jimmy crack corn and I don’t care! And as for their underlings, the less said about Wags’s psychopathic grin of glee when he asks Bobby to “call in the strikebreakers” on the protesters, the better, other than to point out how much fun David Costabile is in this role; he feels like a Better Call Saul character Billions landed in a midseason trade.

Oddly, the episode’s title character, sad-sack double agent Donnie, seems to have spent the episode making a detour to yet another current prestige drama: His off-the-grid vision quest to Cleveland for an audience with a “third-eye seer” named Guru Ash was straight outta The Leftovers, to the point that I half expected him to return to Westport dressed head-to-toe in white while chainsmoking and refusing to speak. Perhaps I’m giving this side-story too much credit, but it strikes me as a compelling bit of character work about a guy who’s basically a nobody. Stressed to his breaking point by his attempt to deceive the FBI on his boss’s behalf by making a trade so enormous it’s frightening, Donnie’s malaise is real enough, but his response to it is cribbed from any number of road-trip movies and self-help books. Dropping everything to drive cross-country and commune with a holy man? Even his existential crisis is uninspired. Shit, he probably got the idea from Don Draper while watching Mad Men with his husband in their palatial home after the kids went to bed. If it felt pro forma, it only makes sense—so does everything this poor dude does.

Of course, we can only guess as to whether he’ll get to do anything else, since he spends the back half of the episode looking sick as a dog and ends it by coughing up blood and collapsing in an interrogation room. Undiagnosed ailment? Burst stress-induced ulcer? Suicide attempt? Rest-stop food poisoning? All possibilities seem equally plausible. They also seem symbolic: Donnie’s not the only one whose involvement with the Rhoades-Axelrod war has made him unhealthy. Chuck’s lying to Wendy about his bogus recusal, a no-no in any dom-sub relationship predicated on trust, let alone a life partnership. Brian Connerty, his right-hand man, is lying on his boss’s behalf too, and lost his relationship with his FBI girlfriend Terri in the process, though he seems to be starting a new one (of dubious ethics) with his subordinate Kate Sacker. Keep this up and their personal lives will be as muddy and useless as Axe Farms. 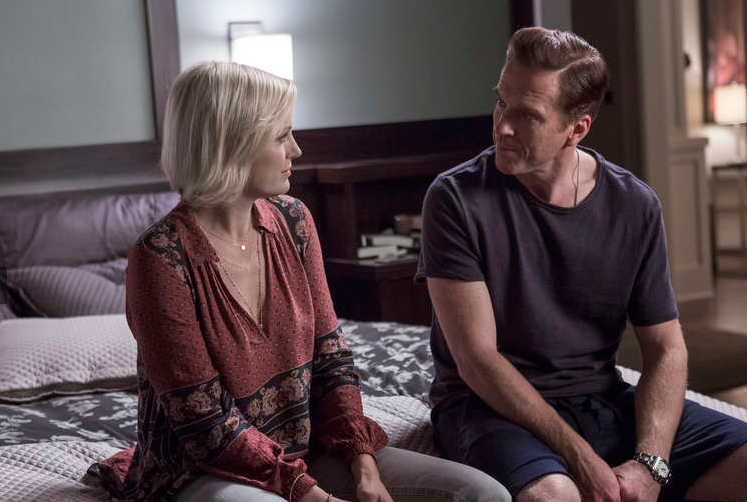