Senator Cory Booker stood on the floor of the U.S. Senate on Thursday and pleaded with his fellow Senators to give Judge Merrick Garland a hearing. On Wednesday, president Obama nominated Garland for the Supreme Court seat that was left empty after Justice Antonin Scalia unexpectedly passed away in February.

Since the announcement of the nomination, Senate Republicans have doubled down on statements made after Scalia’s passing that they would not be giving an Obama nominee a hearing. According to a statement from Senate Majority Leader Mitch McConnell, the choice to wait stems from a desire to “give the people a voice in filling this vacancy” by letting the newly elected president make the pick. According to Booker however, Americans have already had their say by electing 100 senators to hold a hearing and electing Obama to serve eight years as president.

According to Booker, blocking the nomination will impede the governmental system currently in place in America. Booker said that, constitutionally, the United States was formed with “three co-equal branches” of government. He said that, because the Supreme Court serves a critical function, allowing the seat to go empty until after the next election without considering a worthwhile nominee would be nothing more than the Senate skirting the duties delineated for them within the constitution. While Booker said he understand that Merrick may not be eventually selected by senators to fill the seat, he imported with his fellows to take the nominee into fair consideration.

“That is the duty that the American people expect: to abide by the constitution,” Booker said. “We may not ultimately agree on Chief Judge Garland’s nomination… there is no guarantee in the Constitution that who the president nominates should be confirmed. But we should agree that this process we were elected to do should move forward.”

Garland is a former prosecutor who has served on the District of Columbia Court of Appeals since 1997 and chief judge since 2013. If he were appointed to the Supreme Court, he would shift the ideological balance of the Supreme Court. Scalia was known for deep conservatism. Garland’s reputation as a “centrist” figure has made him popular on both sides of the aisle during his time on the Court of Appeals. Despite that, the majority Republican Senate may be looking for a more conservative nominee to keep the ideology of the court intact.

According to Booker, such divisiveness should not be a factor when deciding on a member of the Supreme Court.

“It provides us an opportunity among all the partisanship… for this body show that we will rise above that… and show we are not susceptible to the winds of the time,” Booker said. “As much as our differences matter, we have always seemed to understand that our country matters more. I worry we will fail this test and sink deeper into divisiveness.”

When he was federal prosecutor, Garland led the investigation of Oklahoma City bomber Timothy McVeigh.

“To call his qualifications impressive is an understatement,” Booker said. 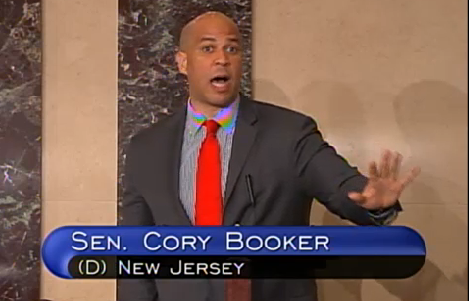