Of course you do. The 1930 fresco of Jesus called “Ecce Homo” that a local art restorer in Borja, Spain, uh, “fixed” in 2012 (pictured above) went on to receive worldwide ridicule via the Internet, thanks to its soulless eyes, anime-style nose and furry chinstrap from hell.

The creator of this mesmerizing icon, Cecilia Giménez, 85, was “humiliated” when the news broke of her less-than-faithful restoration of this original artwork by the Spanish painter Elías García Martínez.

But then something funny happened.

Over the next three years, 160,000 tourists from around the world came to the Sanctuary of Mercy church in Borja to see this curiosity in person, and most of them bought lunch, a souvenir, a hotel room or a variety of other goods and/or services.

So in what can only be described as a roundabout miracle, Beast Christ saved Borja—a town with a population of roughly 5,000—from the devastating recession that the rest of Spain has suffered over the last seven years.

Borja Mayor Eduardo Arilla clearly said to himself “let’s roll with this,” and now he’s opened a center with the hopes of giving “the painting a new impetus,” as he told the New York Post. In other words, come see Beast Christ, tourists.

So go see this abomination in person and learn more about its legendary Internet virality. The new facility “documents the restoration,” according to the Post (oh goodie), and canvases are also provided, in case you want to try to make an even better version of ye old Beast Christ. And yes, there are T-shirts for sale. 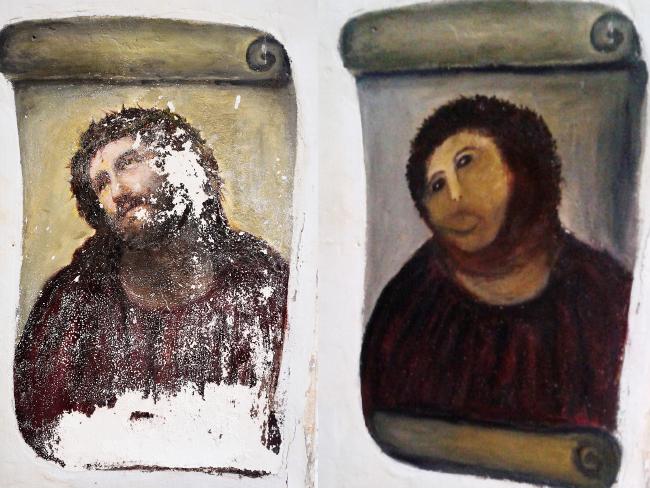