Let’s get this out of the way: it’s still very likely Hillary Clinton is going to be the Democratic nominee for president.

Her delegate lead over Sen. Bernie Sanders remains healthy. Her loss in Michigan was noteworthy, and could presage struggles elsewhere in the Midwest, but the landslide losses Mr. Sanders sustained in the South will probably be his undoing. His campaign has been impressive and will make Ms. Clinton nervous over the next month. Nervousness, though, is not the same as teetering on the brink of defeat.

Another threat hangs over her campaign, and it has nothing to do with Mr. Sanders or the alleged vast Republican plot to destroy the Clintons. It is, of course, the FBI probe into her use of private email when she was secretary of state. For all the ways Clinton partisans pooh-pooh the investigation—a question from Univision anchor Jorge Ramos about a possible indictment earned him an incredulous dismissal—it’s still a dark cloud hovering, albeit distantly, over her campaign. Last week, the Justice Department granted immunity to the former Clinton aide who set up her private email server, an ominous turn in the investigation.

Let’s imagine for a moment that the reality Mr. Ramos asked about comes to pass. What if, sometime before or even after the Democratic National Convention, Ms. Clinton is actually indicted? It’s a remote, though not unreal, possibility. The Democratic establishment, which is completely unified around Ms. Clinton’s candidacy, would panic. And they may realize they have to dispense with damaged goods and go with the man who has wanted to be president for most of his adult life: Vice President Joe Biden.

Mr. Biden very publicly considered running for president over the summer and fall, and backed down because there was no path to the nomination as long as Ms. Clinton, who won all the endorsements and major Democratic donors there were to be had, was in the race. An indicted Hillary Clinton, plus the baggage her candidacy already brings, would probably be enough to prompt Mr. Biden to rethink things. Considering he would make many of the same arguments for his candidacy—a seasoned hand and worthy steward of the Obama legacy—and maybe, through his own swaggering unpredictability, be better matched for the Donald Trump typhoon, Mr. Biden would be the Democratic establishment’s best hope of keeping the White House if the indictment came down. His blue collar roots could also help counter the growing fear that Mr. Trump, the anti-free trade populist and Republican front-runner, could steal away working class voters in the fall.

How could Mr. Biden, who has competed in zero primaries, suddenly become the nominee in Philadelphia? It’s simple. The delegates who are pledged to Ms. Clinton can switch to another candidate. There isn’t much to stop them, especially if a first round of voting doesn’t produce a majority.

“The delegates would just vote any way they want to vote,” said Costas Panagopoulos, a professor of political science at Fordham University who studies American elections. “The Democratic Party would have to find someone and ignore the preferences of millions of people who voted in primaries and caucuses over the last four months. I’m not sure it’s in the party’s interest.”

Would Mr. Sanders’ delegates refuse to back Mr. Biden? Would there be a revolt if the party power brokers came together to elevate someone who, as Mr. Panagopoulos said, didn’t campaign? Would this be a repeat of 1968, when Democratic delegates chose Vice President Hubert Humphrey over a left-wing insurgent despite Humphrey’s decision to sit out the primaries? Anything, especially in 2016, is possible.

“It’s fair to point out, even on the Republican side, those rules can change before the convention begins,” Mr. Panagopoulos added. “If Hillary Clinton is indicted with delegates pledged to support her, it’s unclear whether the party can hold a gun to the delegates’ heads to vote a certain way.”

Since candidates on the Democratic side have a great deal of input “in terms of who fills the slots allocated their candidate in the primaries and caucuses,” this may mean Clinton delegates would be unlikely to stray, said Joshua Putnam, a political science professor at the University of Georgia and an expert on the delegate allocation process. But “a hypothetical indictment may change the minds of those delegates.”

Consider too that Mr. Biden, as the Democratic nominee, wouldn’t have much of an issue appearing on general election ballots in the fall. Each state has a law that a Democrat and Republican go on the ballot. A well-connected Democratic attorney pointed out to the Observer that there are also mechanisms for the Democratic National Committee to remove a candidate even after she or he is nominated.

This is exactly what happened in 1972 when it came to light that Democrat George McGovern’s running mate, Sen. Thomas Eagleton of Missouri, had been hospitalized for depression in the 1960s and received electroshock treatment. The controversy hampered the ticket and Eagleton, on July 31, was forced to drop out. He had been a running mate for all of 18 days. Sargent Shriver, the husband of a Kennedy sister, replaced him. 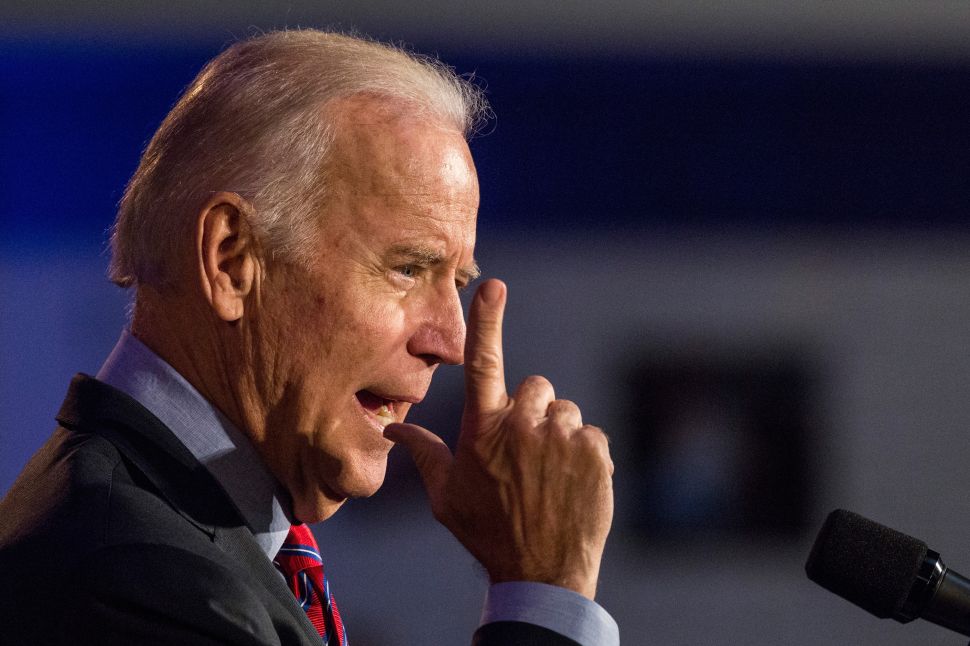