It’s been a while since we’ve had to suffer through anything even remotely like a presidential primary debate. We were supposed to have the 13th (!) Republican debate last week, but business mogul Donald Trump dropped out.

That would have been fine, as he abandoned a previous debate, but then Ohio Gov. John Kasich dropped out and we would have been left with Texas Sen. Ted Cruz on stage by himself. That didn’t fly with Fox News, who cancelled the debate to the delight of happy-hour loving journalists everywhere.

But a debate is a debate, and a one-on-one town hall with CNN’s Anderson Cooper is different, so let’s take a look at how the candidates fared in this not-debate

Where he floundered: His claims that a former Breitbart reporter might have had a bomb (it was clearly a pen, unless she’s been spending time with Q at MI6), have fallen flat all day, but that’s his story and he’s sticking to it.

“She had a pen in her hand, which Secret Service is not liking because they don’t know what it is, whether it’s a little bomb,” Mr. Trump said.

No one thought that reporter had a tiny, pen-shaped bomb.

Where he excelled: Mr. Trump does well—with some Republicans at least—when he talks about illegal immigration and stopping terrorism, and Tuesday night was no different. When asked about his counterterrorism policies, Mr. Trump suggested monitoring mosques.

“I think we have to be extremely vigilant in those areas. I think we need to look seriously at the mosques. Lots of things are happening in the mosques,” Mr. Trump said. “You look at what’s going on in Paris where mosques are being closed, OK, and have to look very, very seriously.”

Where he floundered: Mr. Cruz was forced to explain a prior statement he made in the aftermath of the Brussels terrorist attack about “patrolling and securing” Muslim neighborhoods. While his claim that he meant “we target the enemy,” was fine, he didn’t do a good job of distinguishing how he would differentiate between peaceful Muslim neighborhoods and those with strains of radical Islam.

He also backed himself into a corner by hedging on whether he would support Mr. Trump as the Republican nominee, saying he’s “not in the habit of supporting someone who attacked my wife and attacked my family.” Since Mr. Cruz needs half of all remaining primary delegates to win the nomination, Mr. Trump’s nomination seems inevitable, and that would mean Mr. Cruz either has to stick by his statement or sit this election out. (Of course, he could—and should—still campaign on behalf of candidates if the GOP hopes to retain the House and/or Senate should Mr. Trump be the nominee.)

Where he excelled: I think he gave an honest and endearing answer to how he would win over women voters by talking about his mother.

“I have grown up surrounded by strong women,” Mr. Cruz said. “My mom is someone that I admire immensely.”

Whether the “my mom loves me” tactic will win over young, single women (who tend to vote Democratic because of abortion rights and free birth control) remains to be seen. It probably won’t work, especially if former Secretary of State Hillary Clinton—who is not only a mom, but a grandmother—is the Democratic nominee.

Still, it was a candid moment for Mr. Cruz. Personally, though, I think he might have won over the cheese and cookie lovers by admitting those were his favorite snacks.

Where he floundered: Just being there is floundering because there is no mathematical way Mr. Kasich is the GOP nominee. He needs more than 100 percent of the remaining delegates to get the nomination ahead of the convention, so his remaining in the race is just an attempt to, what, get the nomination from the delegates at the convention on the second, third or fourth ballot? Not gonna happen, Johnny.

Where he excelled: Those of us who knew about Mr. Kasich prior to the 2016 presidential election know he’s putting on a good show to come across as the everybody-get-along candidate, and Tuesday night was no different. It lets voters think he is above the political mudslinging (even though his campaign is engaged in some of the very same).

“If name-calling, bringing in spouses, ripping each other below the belt and wrestling in the mud is the new politics, we all need to stand against it. Our children are watching. This is America,” Mr. Kasich said. “I’m not going to go down there.” 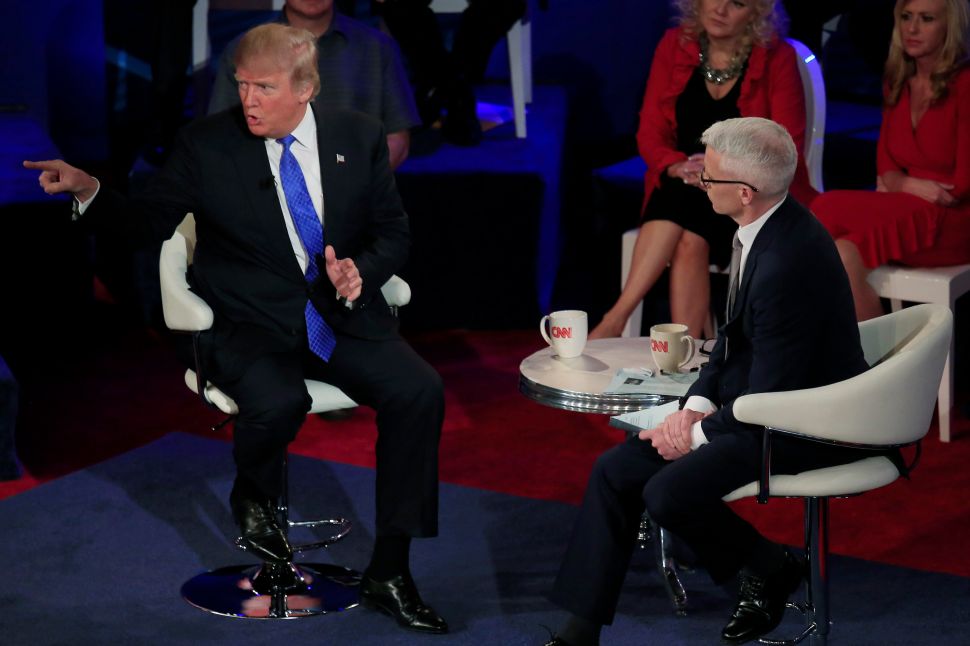