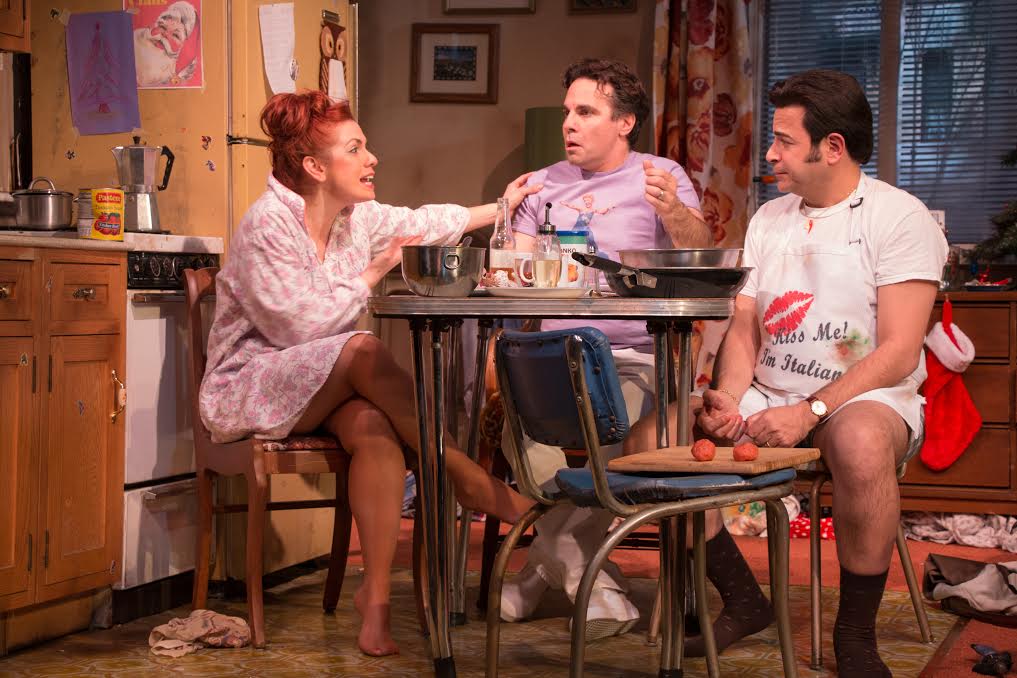 A Room of My Own. (Photo: Ben Strothmann)

A Room of My Own is a raucous coming-of-age comedy at the June Havoc Theatre on West 36th Street about growing up in the overcrowded one-room apartment of a loud, dysfunctional family of overwrought Italian Catholics in Greenwich Village in 1979. It is raunchy and inconsequential. Sometimes, it is also hilarious.

The centerpiece is a wannabe writer named Carl Morelli, who decides to pen a memoir about his crazy family. Maybe it will be a play, or a book.  First he has to get it down right, with the help of his younger self. This gives a precocious kid actor, Nico Bustamante, a chance to bounce back and forth between time frames, commenting on what the older Carl is writing down in his journal. The grownup Carl is played by none other than Ralph Macchio, who has matured from the young star of the popular 1984 film The Karate Kid and its sequels into a handsome, sensitive actor with range and depth.  Dredging up his unconventional childhood, he has no idea what he’s getting into. Among the things he remembers is a one-room flat shared by his shrill, stertorous, chain-smoking mother Dotty; his unemployable father Peter who keeps the family alive on home-cooked manicotti and meatballs; his neurotic sister Jeannie; and an army of assorted cockroaches. Upstairs lives his shrieking, borderline-hysterical Uncle Jackie, a 43-year-old file clerk played by the seldom-sedentary comic Mario Cantone, who, when all else fails, is always good for a laugh a minute. Carl the Kid asks Carl the Grownup, “Are you gonna tell the truth?” He does, although the truth is almost never printable in a family newspaper. (Christmas morning, with tacky dime-store relics hanging from a makeshift clothesline, is especially X-rated).

While the Morellis duke it out, their adult son is writing everything down, coaching them on what to say next, commenting from every corner of the stage. “The butt crack of dawn,” he says, describing the setting of a Sunday morning before Christmas. Sometimes Mr. Macchio throws in the towel and joins the audience. Dotty rants about what she’s going to do to the nun who calls about Carl’s Catholic school tuition money. Sometimes she directs her brassy threats to the Puerto Rican super and the “Jew bastard” landlord. The Morellis are people with nothing to look forward to except an unquenchable sense of humor that gets them through the roughest days and the most compromising nights, when everybody has to share a bed and a couch with somebody else.

The only thing Carl prays for in life is a room of his own, not to mention a separate bed. The laughs, assembled in unexpected ways by writer-director Charles Messina, are fast and furious, concealing the fact that there isn’t much of anything else going on here. Sometimes the one-liners suffice. What they say about the possibility of living long enough to someday see a black president in the White House is worth the price of admission. There are more F words than you’ll find in any David Mamet play.

The tenement flat designed by Brian Dudkiewicz is a noisy expletive in its own right, and the performers are all wonderful—especially the riotous Joli Tribuzio as Dotty—a garrulous harridan with the flattest New York accent since Thelma Ritter. One thing playwright Mr. Messina does is make each member of the Morelli clan as human as they are obnoxious. “Normal is nice,” says older Carl. “But normal is boring,” counters his younger self. This family is not normal. You wouldn’t take them to Connecticut for Thanksgiving. But the one thing you can’t call the people in A Room of My Own is boring.

Another play worth investigating is Straight, written by Scott Elmegreen and Drew Fornarola and directed by Andy Sandberg, a tender exploration of the pros and cons of being bisexual in a contemporary society that often insists you can only be one or the other. Two men are watching a ball game on TV. Ben (Jake Epstein), whose orderly, pristinely designed Boston apartment is the setting, is a well-groomed stockbroker wearing in a tie. Chris (Thomas E. Sullivan), his younger companion, is a casual, tousled college student. It’s a pickup. It’s awkward. And the sex is brief. Ben also has a girlfriend—a biologist named Emily.

Ben lives all day in front of a computer terminal and gets paid six figures.  Chris is the passionate sexual release he craves. Inevitably, Emily (Jenna Gavigan) bursts in on them in bed, but instead of starting World War III, she likes Chris too, insisting he stay for brunch. Obviously, something must change. In the next 90 minutes without intermission (my kind of play) months pass and Ben finally confesses he loves them both. What’s wrong with Straight is there’s a lot of talk about things like genetic engineering and Socrates’ bisexuality, but the talk is stiff as a Yankee spinster’s corset and not always believable. (“The thing that was supposed to be then is now now,” “That’s what long-term means—you push through the rough spots because the rest is so great.”) For a play about sexual identity confusion, a man with a great fiancée who lacks the guts to admit he’s gay is not a likeable character. Nor is a woman on the verge of marriage who is so naïve (or maybe stupid) that after she finds Ben and Chris in bed together in their underwear, she doesn’t seem to have a clue about Ben’s sexual confusion. In the end, when Ben chooses between the two objects of his passion, it’s not the one the audience expects. 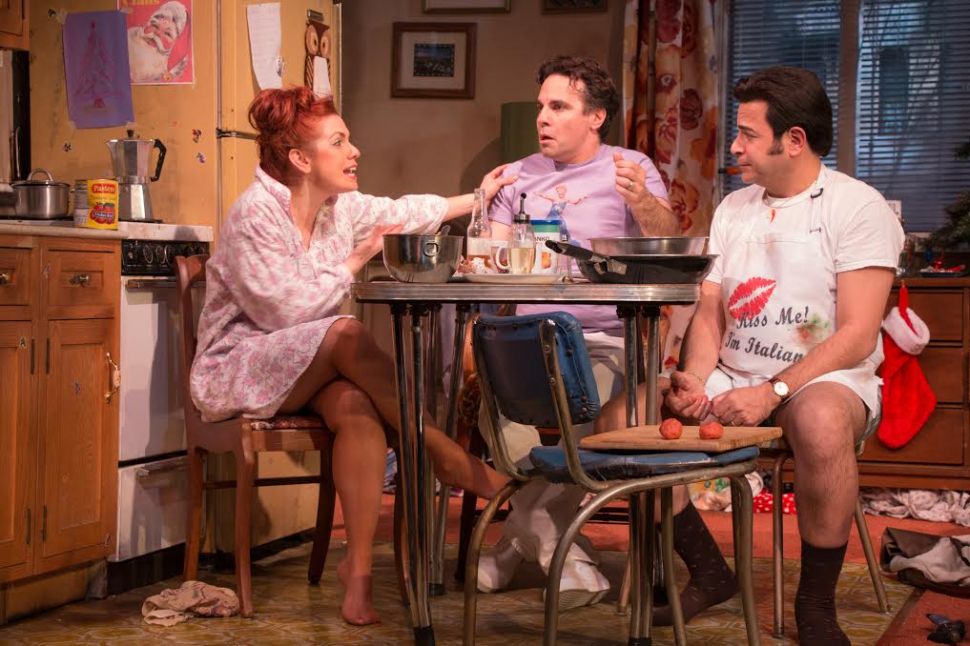