NEWARK — At an event Friday announcing a finalized plan for cleaning up the Passaic River, Senator Bob Menendez (D-NJ) criticized Governor Chris Christie for his decision to endorse Republican frontrunner Donald Trump in the run-up to Super Tuesday. Pointing to Trump’s claim that he would slash funding for the Environmental Protection Agency as president, Menendez said that last night’s Republican debate typified the crass 2016 primary cycle.

“You have to judge in the measurement of who you endorse, and what they stand for,” Menendez said. “And last night Donald Trump once again reasserted that part of the way he’s going to deal with the deficit is by eliminating the EPA.”

Saying that the EPA’s Superfund cleanup program has been essential in planning the effort, which would clear 3.5 million cubic yards of toxic sediment from eight miles of the river, Menendez questioned the governor’s wisdom in lending his support to Trump.

“You need someone to be the cop on the beat, and environmentally that’s what the EPA is. So it’s really, just in this dimension alone, pretty hard to comprehend that in the state that has the largest number of Superfund sites in the nation, that the governor would endorse someone who actually wants to end the agency that would finally be able to clean up those sites.”

Senator Cory Booker agreed with Menendez’s assessment, saying that he was “disappointed” with the tone of last night’s exchanges between Trump, Ted Cruz and Marco Rubio. Menendez said that he didn’t make it through the whole thing.

“I turned it off because I was disgusted with what was going on on stage for those individuals who aspire to be the president of the United States, the highest office not only in our land but the leader of the free world. The person who holds the nuclear code if they are elected.

“To listen to a group of candidates sound like schoolyard junk dogs instead of discussing the poltiical issues of the day is just… in my 42 years in government I’ve never seen anything like it.”

Menendez faces his own challenges as his bribery case heads to federal appeals court this month. The EPA’s cleanup has its own critics in environmental circles. Jeff Tittel, Director of the New Jersey Sierra Club, said that flawed methodology and a lack of penalty funds from polluters themselves have weakened the effort.

“These communities have been victimized first by the disposal of dioxin in the River and now victimized again by EPA’s failure to do a comprehensive clean up and make polluters accountable,” said Tittel. We have waited for almost two years for the EPA to come up with a final plan and now this plan has been weakened. This is too little too late. This plan makes absolutely no sense.  A cap will not work in a moving river.  When the River floods, it will erode and cause the cap to fail washing toxic sediments into the river.” 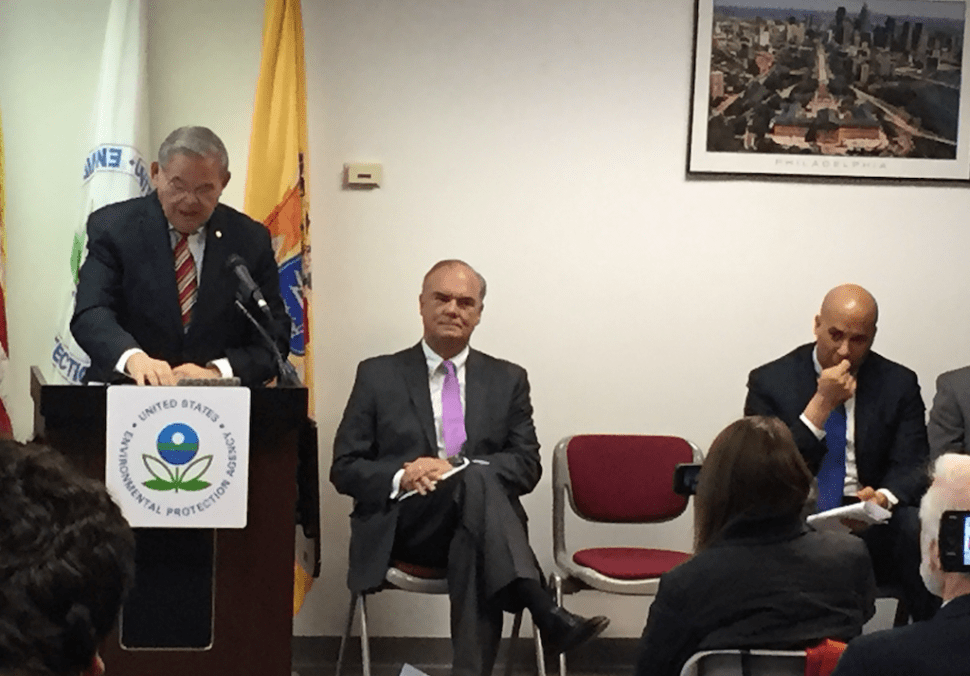