After racking up five victories in six contests on March 15, Republican frontrunner Donald Trump solidified his position as the undisputed leader of the GOP presidential pack. The key question now is whether the “Stop Trump” movement will be able to prevent him from attaining the required majority of 1,237 delegates headed into the Republican National Convention in Cleveland starting July 18.

It will not be easy, but it remains possible for those opposed to Mr. Trump to block his path. If Ohio Gov. John Kasich manages to stay in the race and do significantly better than he has done to date, it is conceivable that Mr. Trump could head to Cleveland somewhere around 80 delegates short of the necessary majority.

Using the best available polling data and an extremely useful Republican Delegate Calculator tool available at Real Clear Politics, there is clearly a potential scenario in which this could happen. If, going forward, a revitalized Mr. Kasich inherits the support of “establishment” candidates who have now bowed out and begins contending for significant vote shares in the remaining primaries and caucuses, and if Texas Sen. Ted Cruz continues to perform as well as he has so far, he and Mr. Kasich could conceivably combine to block Mr. Trump from winning outright before the convention.

The Stop Trump crowd will have to decide between being shot or poisoned: Would they prefer the unpredictable Mr. Trump, or the unloved Mr. Cruz?

Before going any further down this road, it is worth suggesting that the media and establishment Republicans—both eager for a contested convention, albeit certainly for different reasons—are probably underselling Mr. Trump’s ability to get to 1,237 delegates and clinch the nomination by the time the last primaries have finished on June 7. Even in a race with multiple candidates, Mr. Trump has nonetheless secured more than 47 percent of all delegates awarded to date, so if he can pick up just a small portion of the votes that previously went to candidates who are now out of the race, he certainly could get over the magic 50 percent threshold.

Additionally, it may be expecting a bit much of Mr. Kasich to think that he’s suddenly going to go from single-digit support in many states to winning anywhere from a quarter to a third of the vote consistently, or that all of the support that formerly went to candidates like Marco Rubio or Jeb Bush will go to the Ohio governor. From the start of this race, we’ve seen that every candidate saddled with the “establishment” tag has sunk like a stone under its weight, a fate that befell Mr. Rubio this week, and Mr. Bush before him. Judging by his past results, Mr. Kasich’s lone victory on his home turf in Ohio could well be his high- mark.

Those caveats aside, if everything goes as well as possible for Mr. Trump’s remaining competitors, we could see our first “brokered” convention since 1952. And it is Mr. Cruz who stands to be the broker.

Barring a spectacular collapse by Mr. Cruz or an amazing surge by Mr. Kasich, the Texan is likely to head into Cleveland solidly in second place, probably with something in the neighborhood of 700 pledged delegates. Mr. Trump, at his current rate, would probably have no fewer than 1,100, with perhaps about 600 scattered among Mr. Kasich, Mr. Rubio (who exited the race with 169) and the other candidates who dropped out earlier.

Clearly, at this point, a battle would emerge between Mr. Trump and those who want to stop him. It can be reasonably assumed, from their public statements to date, that Mr. Kasich and Mr. Rubio would fall in the latter camp.

In such a situation, neither the Trump camp nor the anti-Trump camp can get to 1,237 delegates without the support of Mr. Cruz, who has been nowhere nearly as condemnatory of Mr. Trump as his aforementioned competitors. At this point, the wily Texas Senator would be perfectly positioned to wheel and deal.

It is not hard to envision how it all would go down. First, Mr. Cruz goes to the Stop Trump camp and tells its denizens very plainly that they do not have the votes to crown a nominee without his delegates. As such, they must agree to award him the presidential nomination, or he will throw in with Mr. Trump. He might sweeten the pill by offering the vice-presidential nomination to Mr. Kasich or Mr. Rubio, with a key cabinet post going to the person not chosen for the ticket. At this point, the Stop Trump crowd would have to decide, as Sen. Lindsey Graham put it, between being shot or poisoned; would they prefer the unpredictable Mr. Trump, or the unloved Mr. Cruz?

If the Stop Trump camp’s answer is no, Mr. Cruz then goes to Mr. Trump and offers up his delegates in exchange for the vice-presidential nomination. Scoff if you want at the notion that Mr. Trump would agree to such terms from a candidate he publicly refers to as “Lyin’ Ted,” but the deal-savvy Mr. Trump is no fool. Presuming Mr. Kasich and Mr. Rubio do end up firmly in the “Stop Trump” camp, a deal with Mr. Cruz would be the only available option to get Mr. Trump over the finish line. He would cut that deal in a New York minute.

In short, in the event that Mr. Trump fails to lock down the Republican nomination by June 7, it will be Mr. Cruz’s turn to deal a high-stakes hand of Texas Hold-Em. If he cannot put together three of a kind with Mr. Kasich and Mr. Rubio, he’ll get his share of the pot by pairing up with Mr. Trump. 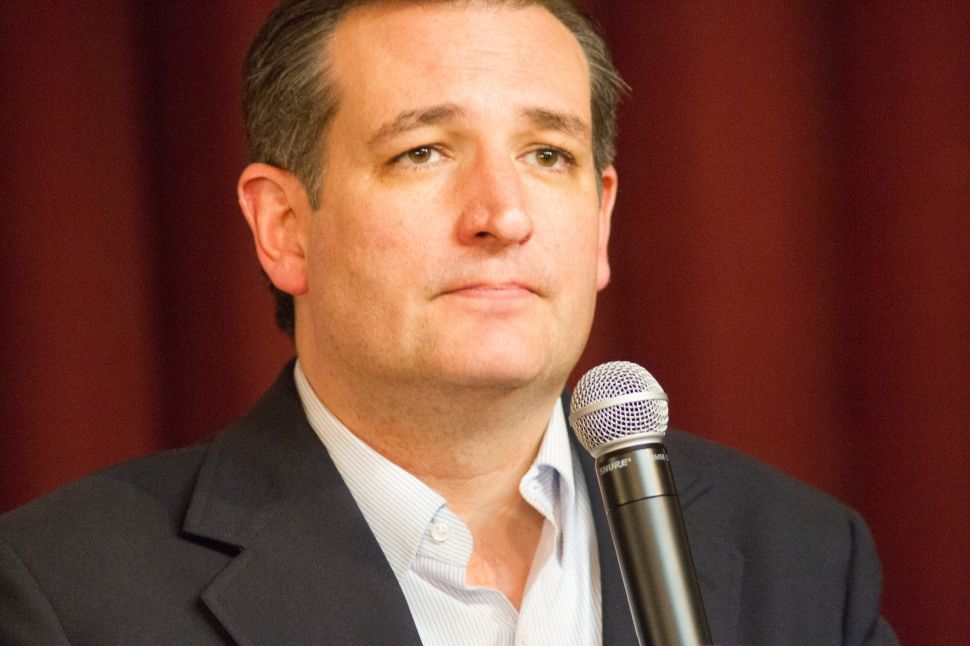