AUSTIN, Tex.—Baratunde Thurston wanted to see the President’s keynote at South by Southwest.

Even though it meant flying into Austin, flying back out for another meeting and then flying back to Texas again, Mr. Thurston got to South by Southwest (SXSW) Interactive earlier than he really needed to this year, because he wanted to see Barack Obama, he told the Observer during an interview inside the Austin Convention Center. All the trouble was worth it to sit in the same room as he was, during his final days in office.

Ostensibly, he was at the conference in order to be inducted into its Interactive Hall of Fame. Mr. Thurston is a comedian and author of How To Be Black who has been living at the intersection of technology and comedy, since he worked at the humorous newspaper, The Onion, building its digital strategy. The Observer covered his company Cultivated Wit‘s last Comedy Hack Day in New York City, in July.

In 2014, the Brooklynite announced that he would head to Los Angeles to do a show with Meghan McCain called Take Part Live. After 36 episodes, it wasn’t renewed, but he still had every intention of staying west. L.A. was a place where, he found “People eat better, drink less, exercise more and I was looking to set up more of my life out there. To explore that. And then Trevor called,” he told us.

By “Trevor” he means Trevor Noah, the man who took over The Daily Show from Jon Stewart. The Observer recently spoke to one of its new correspondents, Roy Wood Jr. In August, Comedy Central announced that Mr. Thurston would be heading up the Internet side of the show. With an executive role on a major TV show, that’s definitely his claim to fame; however, to us, he’ll always be the guy who showed everyone how to make technology funny.

The following interview has been edited and condensed:

So why are you at SXSW?

I started coming here 10 years ago. I came eight years in a row. I took the ninth year off, but I’m back this year. Cultivated Wit was an outgrowth of the digital work at The Onion, which was bolstered here. I was coming here before I ever worked at The Onion. I came to SXSW before the sponsors showed up big time. I’m the original hipster. Now I’m like the old man.

There’s a McDonald’s lounge. I saw this thing, it’s called the “M Loft.” It’s McDonald’s. You just gentrified yourself.

So this conference has come a long way.

I think that’s why they are bringing me into the awards because SxSW is about an integration. It’s where you don’t just make stuff, you make it beautiful. You make it human. It’s like, I don’t code anything. I know how to talk to people who do code things. To ask, “How do you be funny through interface, through devices, through code?”

So now, how do you use the cultural mantle of something like The Onion or The Daily Show and bring digital way more into that. It’s like linear TV, but the stuff we’re doing at The Daily Show is far beyond that. Taking all those lessons and deploying it on the largest organization I’ve ever been a part of.

What’s your title on the show?

Supervising producer and contributor. I’m building a department that never existed there before, which is the Internet department. It’s called “Digital Expansion.” So I was brought in in some ways to do what I did at The Onion over again, but eight years later.

Very briefly, an overview of what our team does: First, we process yesterday’s show and get it out online everywhere we can, as appropriate. We translate the show to the Internet.

Two, we make today’s show. We’re integrated into the process of making the show. Whether that’s finding research and information to support a bit. Building a website to expand on a bit. Hashtaggery campaigns.

And the third is making new stuff, original digital content, untethered to the aired version of the show. So this means new videos. This means apps. This means websites. This means putting stuff online that wasn’t made in the process of making the show. Things that would happen if there wasn’t a show that day, we would still do it.

Cultivated Wit did some great political website, I can’t quite remember it though. Do you know what I mean?

So, that was frustration. That was the Congress shutdown [in 2013], when it decided not to go to work. Everyone else still had to, and they kinda fucked the country. We bought this domain name. We’ve all drunkenly bought a domain name before and never done anything with it. We soberly bought this domain and did something kinda drunken with it, which was to shit on Congress, but more eloquently than that.

So the idea was, how do we highlight the cost of this government shut down?

It was like three days of work and it struck a nerve. It was like the integration of humor and activism and the Internet.

That seems like a Daily Show kind of thing.

So, an example of something we did on The Daily Show since I’ve been there: Ted Cruz has a Super PAC, and one of the ways candidates like to “not coordinate” with their Super PAC is to do a footage dump. So there’s a YouTube channel that his team created. It had 13 hours of raw advertising shoots. It’s him with his family talking about growing up. It’s them praying. Like, take five of praying at the dinner table, with Ted Cruz telling his family: be more authentic praying for this advertising shoot. It’s him saying “I approve this message” over and over again.

So we used that footage to cut our own ads on Ted Cruz’s behalf.

And I think that’s something that the old Daily Show might have done. The Daily Show with Trevor Noah asks: “How do we go further?”

We encouraged the public to #CruzYour OwnAdventure. To make their own ads, so we pointed them at this repository of footage and we said, “Hey, go nuts. Put your bits out online.” There were like 180 submissions. We put the one we liked most on air.

Jake Terisi won it. It was creepy. It was dark. It was hilarious. He sound mixed it perfectly. He’s a really good film editor.

Stuff like that is going to keep happening, but I think that’s one of the best examples of what we’ve done.

Why should I be watching The Daily Show with Trevor Noah?

Because it’s in transition, and that’s interesting. Because it’s meant such a specific thing for so long. There’s not too many opportunities in culture where you get this kind of shift.

When you get an American-born comic voice taking over a show, people can understand it a bit more. They don’t have that with Trevor. As you get to know Trevor, the dude is just strong. He’s very funny and his stand up reveals a lot, but his life… He’s experienced so much. He’s the product of an illegal union; his life was illegal. Because his mother is black and his father is white.

He’s experienced a level of domestic violence in his own home that’s beyond people’s imagination. His mom was shot in the head by the man that she loved. And he had to deal with that.

He’s taken a lot of these experiences in a much more radicalized racial environment than we have in America (one we seem to be toying about with lately, in the political tenor), and he’s made comedy out of it.

His comedy is born out of a depth of lived experience that I think is really unique. It’s not just out of telling jokes. 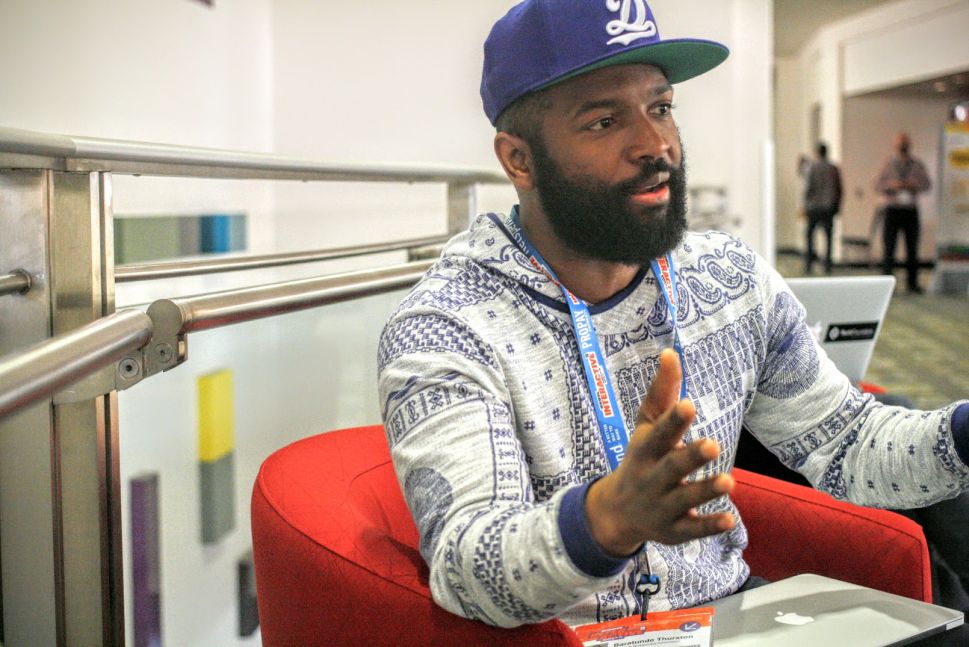