You might not naturally think of tough-guy “Bad Ass” actor Danny Trejo as a rival to quick-service dining pioneers like Danny Meyer and Roy Choi. But the man perhaps best known as Machete also wants to slit the throat of shitty fast food in Los Angeles.

While Mr. Meyer has been busy expanding Shake Shack to L.A. and Mr. Choi has debuted his game-changing Locol in Watts, Mr. Trejo has started his own quest to redefine how the masses eat at his new Trejo’s Tacos.

Trejo’s Tacos, which has soft-opened for lunch and plans to add dinner soon, is in a former Taco Bell on La Brea Avenue. But it’s nothing like that sloppy chain. The focus at Trejo’s Tacos is healthful, clean, thoughtfully sourced meals. And day after day, the jammed lunch line that doesn’t subside until food is sold out proves that this is what L.A. wants.

The slow-roasted pork shoulder taco, served on an organic tortilla, has a kick from preservative-free hot sauce that’s fermented in-house. Chef Ramses Walker tells me that proteins like the top-selling beef brisket are from Premier Meat, which sells ingredients from sustainable farms to upper-tier restaurants like Bestia. The side dish known as Danny’s Super Rice includes organic Koda Farms brown rice and organic quinoa. There’s a lot about this restaurant, including a black pepper tofu taco and heirloom beans, that’s “vegan-friendly,” says Mr. Trejo, who loves the organic street corn. Food is made with care and attention to detail, like the shaved lime zest on chips that are salted to order for every serving of guacamole. A tostada with grilled Mexican white shrimp is brightened with citrus wedges, lettuce, cherry tomatoes, avocado and serrano pepper.

The goal of Mr. Trejo and partners Ash Shah and Jeff Georgino is to serve a better version of Mexican food that won’t clog your arteries.

At many taco shops, “you can taste the grease,” Mr. Trejo says. “Especially Latinos—we’re so saturated with greasy food. Our whole race has an obesity problem. When you’re in a Mexican neighborhood and go by a grammar school, six out of eight kids are heavy and the others are obese.”

‘She was a great cook, in the Mexican style of ‘put a little more lard in it.”

As Mr. Shah says, there’s a lot to love about the street tacos L.A. is blessed with, but that kind of heavy food isn’t something you want to feed your family every day.

“People are realizing that Mexican food doesn’t have to be this greasy,” says Mr. Shah, who adds that Ray Garcia’s Broken Spanish and BS Taqueria, Wes Avila’s Guerrilla Tacos and Walter Manzke’s Petty Cash, as well as Enrique Olvera’s Pujol in Mexico City, are among the high-profile destinations elevating the cuisine.

Trejo’s Taco’s, which tapped chef Daniel Mattern (whose Cooks County was named the city’s best new restaurant by Los Angeles Magazine in 2012) to consult on its menu, likes to riff on traditional Mexican food.

Some dishes and salsas are inspired by Mr. Trejo’s late mother, but this is also a restaurant that will fry Jidori chicken, proudly serve it on a lettuce cup and call it a taco.

And then there’s the date-sweetened house-made horchata, which L.A. Weekly would prefer to be sweeter. I don’t even need to bring up that newspaper’s opinion—the writeup overall was positive—for Mr. Trejo and Mr. Shah to explain why they want drinks that aren’t overly sugary.

Machete, as you may have guessed, isn’t down with drinking the Kool-Aid.

Mr. Trejo and his partners have aggressive expansion plans. They’re already working on another Trejo’s Tacos in Hollywood and hope to have as many as seven locations nailed down in the next two years.

“We’re looking at the same spots where Shake Shack is looking,” says Mr. Shah, who adds that he’s also been inspired by the success of fast-casual pioneer Paul Hibler’s Pitfire Pizza in L.A. Santa Monica, Playa Vista, the Arts District, Pasadena, Long Beach and even Orange County are all possibilities for Trejo’s Tacos.

Mr. Trejo and his partners are also testing donuts and coffee for a second concept that will launch in Hollywood.

“The whole thing is, we don’t want to franchise Trejo’s Tacos,” Mr. Shah says. “I think to keep the quality where we want it be, we can’t really put it in other people’s hands.”

Donuts and coffee, meanwhile, could be something to franchise while they expand Trejo’s Tacos nationwide with company-owned restaurants and perhaps airport and stadium locations. If they find the right space, they could branch out into a Trejo’s Cantina full-service restaurant/margarita bar. They also have their own line of beer, coffee and hot sauce they’re looking to roll out to grocery stores.

“My mom had a dream of opening up a restaurant,” Mr. Trejo says. “She was a great cook, in the Mexican style of ‘put a little more lard in it.’ It was really really good food, but she came from an era where the man went to work, the woman stayed home. We always would talk about food, what’s for dinner. My mom passed away, but she got to know that I was going to open a restaurant. And we serve the salsa I grew up on.”

But a lot of the food at Trejo’s Tacos is quite different that what Mr. Trejo ate as a kid in L.A., of course, and he’s heartened by the response he’s gotten from some of his “best friends who are the worst critics.”

“They’re saying this is delicious and I don’t feel like I got a 150-pound weight in my stomach,” Mr. Trejo says. “It’s lighter. Anytime you eat at a Mexican restaurant, you immediately want to go to sleep.”

Mr. Trejo’s old pals might have grown up on lard-laden fare, but they appreciate Machete’s crusade to slash up fast food as we know it.

“After you turn 50, you start thinking about getting healthy,” says Mr. Trejo, who at 71 still looks like he could kick your ass. 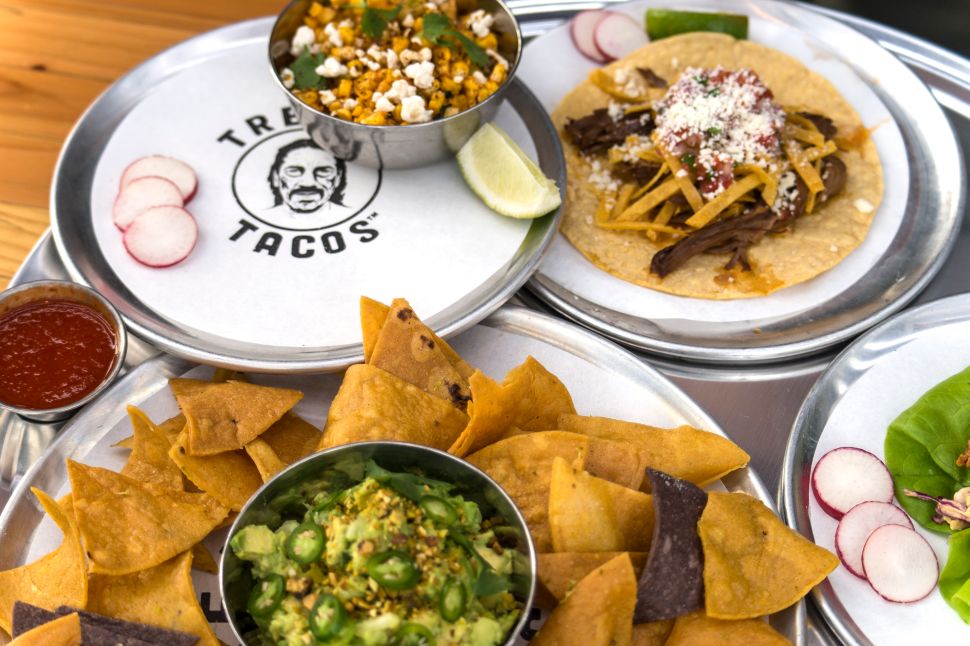