Philip J. Silvera is a lifelong superhero fan, which makes it ironic that he’s so good at making them beat the shit out of each other. As a stunt coordinator, Mr. Silvera has orchestrated some of the last decades biggest super-powered brawls–Batman vs. Bane, Deadpool vs. Colossus, Daredevil vs. roughly 10 dudes at the same time.

Mr. Silvera is back on board as both fight coordinator and second-unit director for Daredevil’s sophomore season–dropping on Netflix March 18–which picks up where season one concluded. Matt Murdock (Charlie Cox) is trying to clean up Hell’s Kitchen by day with his law degree, and at night with his fights as the costumed hero Daredevil. Things take a turn for the shotgun-blasted with the arrival of murder-happy vigilante Frank Castle–a.k.a The Punisher–along with an old flame named Elektra who happens to also be an assassin.

We talked with Mr. Silvera about Daredevil season two, the Punisher’s fighting style, and how a $400 a month habit led to some of the most faithful comic-book fight scenes on screen–big or small.

Is there anything in Matt’s fighting style that changed between season one and season two?

It’s not that we’re conscious of making it different, it’s that we’re continuing to tell the story from where we left off. I think last season he was still coming to terms with being this character, becoming Daredevil, accepting that. Ann this season he’s grown a little more confident in the role, which changes how he interacts with people like Frank Castle. That’s the natural evolution of the story.

Punisher and Daredevil have been trained so differently–how would you describe Frank’s style compared to Matt’s?

They are opposite ends of the spectrum, so when they meet in the middle they both have a specific sense of brutality to them. When DD hits somebody they get back up, when Frank hits them they stay down. I think there’s a finality to Frank’s style.

Plus, Frank comes from a military background, so you see that tactical thinking in how he approaches situations. You see how he can take care of a person by engaging them from 100 feet before he even gets into a hand-to-hand situation. He thinks of things strategically. And when he has to get into hand-to-hand then you see the tactical side mixed in with his emotions.

“When we first meet up with Daredevil in season two, he’s grown a little overconfident. When he meets the Punisher he gets put back on his ass a little bit.”

What did you want to highlight visually whenever Matt and Frank met physically?

There’s a specific moment when they meet for the first time…it’s a very specific interaction. There’s a respect level that Punisher might have for Daredevil. He doesn’t want to kill him, he just wants to get away from him and you see that. You see Frank holding back while DD is relentlessly trying to keep up with this guy.

When we first meet up with Daredevil in season two, he’s grown a little overconfident. When he meets the Punisher he gets put back on his ass a little bit. That’s the best part about these two characters–you have a test of wills between them that carries on into episode two, and episode three, so on–and for me I love those three episodes because you see the dynamic building and building. Some of it comes from a scene straight from the comic books. The fans are gonna’ love that.

Charlie Cox mentioned something like “the hallway scene from season one on crack?”

[Laughs] Yeah, he has said that a couple times. Let’s just say it plays out somewhere in the first three episodes. I will say the fans are really going to love that episode. It’s definitely an homage to something we did in the first season.

For me personally, with Daredevil, and Elektra, and the Punisher, I’m a huge fan of all these characters and their source materials. It’s like a $400 a month habit with comic books for me still to this day. So what I want to do is, do them the way the fans want to see them, the way I’d want to see this person come to life for the first time. That’s me, and then the writers and [Executive Vice President of Marvel Television] Jeph Loeb, and the showrunners, they have a great vision. I think this is an iteration of Elektra people will love.

Elektra is an aloof character that Matt can’t get a read on, whether she’s telling the truth or not. She is that trained assassin, and you get to see that here. You also see her on that journey to becoming that, and how she interacts with Matt and inserts herself into his life.

“You’re never going to just see punching and kicking, or a car exploding for no reason just to add another stunt sequence. It always has to be driven by something.”

You mentioned that working with [Deadpool director] Tim Miller has influenced the way you worked over the years.

Absolutely. Tim and I are good friends, we’ve worked together for about 8 years now. He’s a huge fan of comic book characters, and he’s very interested in staying true to them. That’s what you saw with Deadpool. That’s the influence on me. I want to see those comic books come to life.

The good thing about this season of Daredevil is that I’m also second-unit director, so I got to direct not only the action but the camera lens. It’s all about telling a story with these sequences. You’re never going to just see punching and kicking, or a car exploding for no reason just to add another stunt sequence. It always has to be driven by something. Which I think fans caught in the first season. Every fight, every sequence, everything had an emotion and a purpose to it. There was a practicality to it and a real-world weight. That’s what I try to bring to these characters from the action side of things. 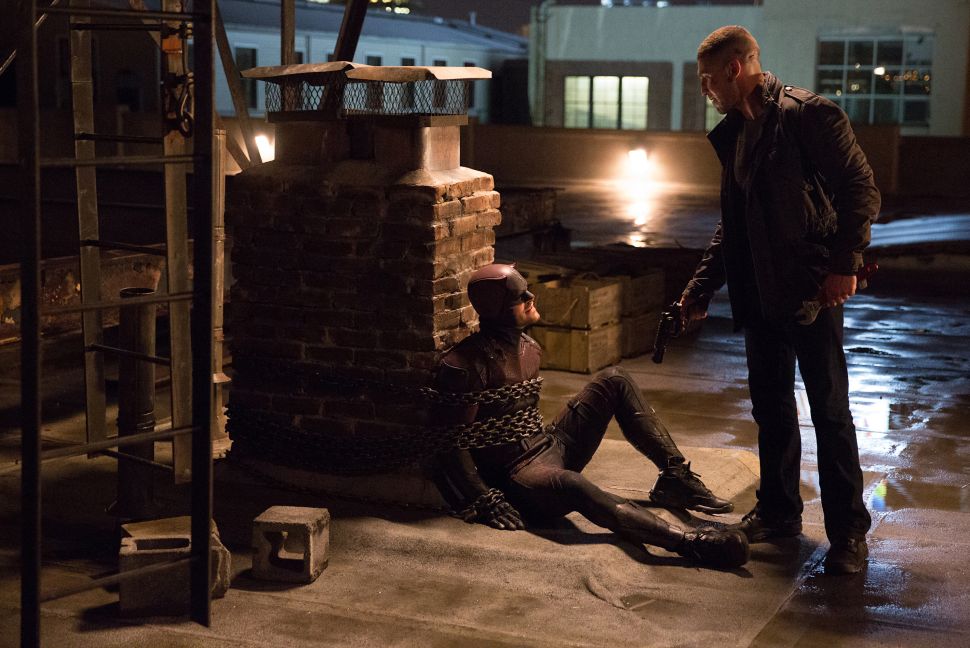