WASHINGTON—Mayor Bill de Blasio enjoyed some unusual praise and support from several House Republicans today—and all it took to bring them together was President Barack Obama’s proposal to slash the city’s anti-terror funding in half.

“My message is we cannot protect New York City sufficiently without this funding,” Mr. de Blasio told a House subcommittee on homeland security today. “And I believe it’s a fair national priority to protect out largest city, and a city that is so central to our national life.”

Mr. de Blasio was delivering that message to an audience of strange bedfellows—including the chairman of the subcommittee, Congressman Dan Donovan of Staten Island, and Congressman Peter King of Long Island, who both represent districts where Mr. de Blasio is unpopular and who don’t always see eye-to-eye with the self-proclaimed progressive mayor.

Mr. King, who praised the mayor and the NYPD, noted that he and Mr. de Blasio don’t agree when it comes to many policing issues. “Today’s not the day to bring that up,” Mr. King said, after himself raising the issue. “Let’s stay united today.”

Meanwhile, Mr. de Blasio and Mr. Donovan traded compliments. The mayor offered the congressman congratulations from the “eight-and-a-half million New Yorkers” who were proud to see one of their own leading the subcommittee. Mr. Donovan ended the mayor’s time at the committee by offering up this in response: “As one of the 8.5 million people who lives in the city that you lead, I thank you for all you do to protect me and my family.”

The New Yorkers had found a common enemy, after all: a presidential budget that proposed major cuts to a grant program known as the Urban Area Security Initiative, which the mayor said helps pay for things like lower Manhattan’s extensive surveillance network, helicopters that can find radioactive materials in crafts and elite units of anti-terror cops. The city most recently received $180 million through the program; the budget proposal would slash that to $90 million, city officials say.

“Proposing cuts to the programs that keep the homeland safe would be foolish in any case, but they are particularly outrageous at a time when our threat level is the highest it’s been since 2001,” Mr. Donovan said. “It would seem that either the president doesn’t believe these threats exist, or he doesn’t care.”

But while Mr. Donovan ripped into Mr. Obama, Mr. de Blasio really didn’t. He said he was “deeply concerned” about the cuts, and made quite clear that he believed they were a mistake and that the funding needed to be restored, but he but didn’t take any swipes directly at the president, a fellow Democrat.

“It was like a game of taboo. He’s definitely played before,” one source present at the hearing opined to the Observer. “It was actually pretty impressive to go through an entire hearing about the president’s budget and not mention the president once.”

While he didn’t make Mr. Obama a target, Mr. de Blasio nonetheless vowed to press for the restoration of the funding and called on Congress to ensure the cuts didn’t become a reality.

“We simply can’t afford to stand back when these threats are becoming greater and more challenging,” Mr. de Blasio said.

The mayor said after the testimony that he has not spoken with Mr. Obama about the funding. But he met today with Homeland Security Secretary Jeh Johnson, who will testify to Congress tomorrow about his budget. Mr. Donovan asked what the mayor’s message to Mr. Johnson would be.

“I would say to him that we in New York City invest heavily in counter-terrorism ourselves,” Mr. de Blasio said when Mr. Donovan asked for his message to Mr. Johnson. “For every dollar we receive from the federal government, we spend one of our own dollars as well. We spend the taxpayers’ dollars in our city to protect our people and all the people who visit us.”

Mr. King agreed—saying the rest of the country ought to realize the “tremendous expense” involved for the NYPD to keep the city safe from terrorism, and that the local government ought be reimbursed for it.

“This isn’t charity you’re getting,” Mr. King said. “You’re doing the work the federal government should be doing.” 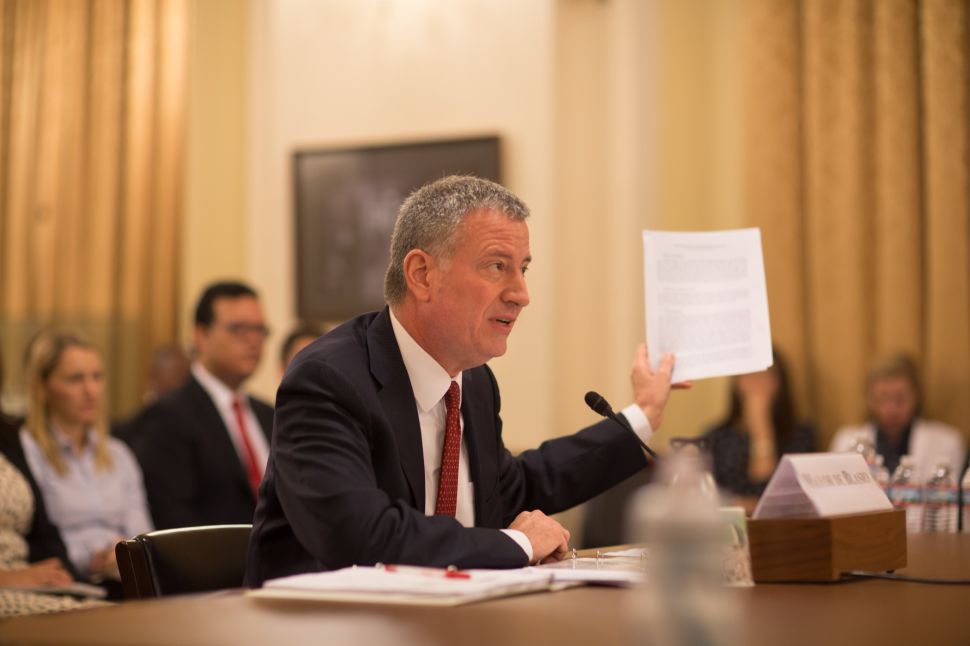