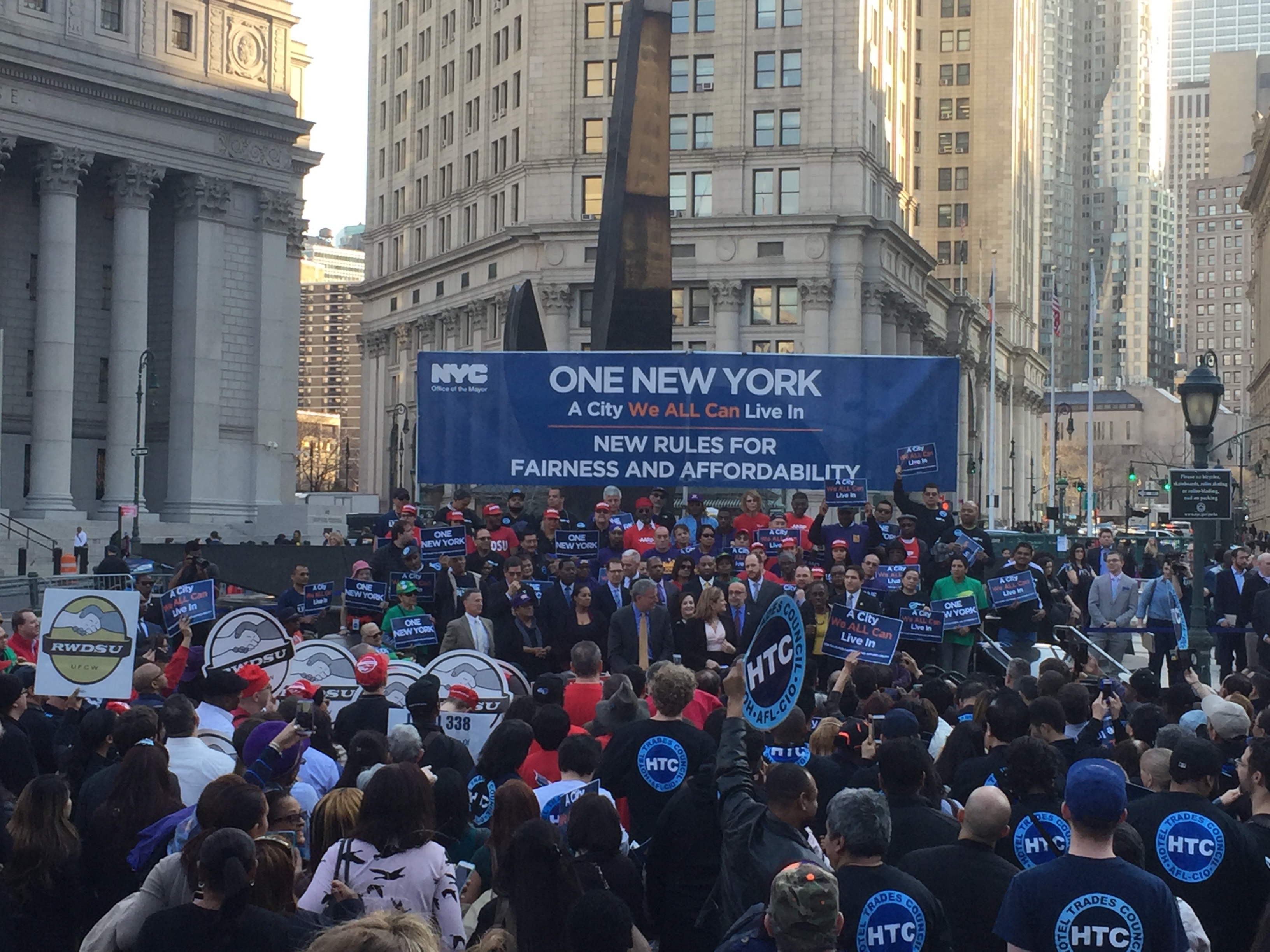 “We did it!” Mr. de Blasio explained at the top of an enthusiastic speech to a crowd of a few hundred people dressed in union t-shirts and hoisting AARP signs.

There was no sign of the protesters who took control of the balcony at yesterday’s City Council meeting to pass the zoning text amendments, known as Mandatory Inclusionary Housing and Zoning for Quality and Affordability. The group had superglued their hands together and loudly accused the Council of selling out the city’s poorest New Yorkers.

(Today, Council Speaker Melissa Mark-Viverito, who checked on an injured protester yesterday, said she thought police had handled the demonstrations “fine,” though she was concerned for the man and had tried to reach him by phone today. “People are gonna have the right to protest, but we also have the responsibility to be able to continue our deliberations.”

If anyone wanted to protest the rally today, it would have been hard to get anywhere near it, thanks to police barricades and security screenings. If they were shouting from a distance, it wasn’t audible over a playlist that seemed to be based mainly around songs with “New York” in the title.

Judging by Mr. de Blasio’s own survey of the crowd—he asked people to cheer when he called the name of their organization, like a Sweet Sixteen deejay asking just the ladies and then just the guys to make some noise—it appeared the vast majority of attendees were members of the Hotel Trades Council union. But there was also plenty of hooting and hollering for members of the AARP, a group that has enthusiastically backed the mayor’s plan, and for unions like 32BJ and the Retail, Wholesale, Department Store Union.

Mr. de Blasio appeared to be enjoying his victory in pushing through the massive citywide zoning effort, a program that is the heart of his plan to fulfill a campaign promise to build or preserve 200,000 units of affordable housing and seems to be second only to universal pre-K in his heart. His wife, Chirlane McCray, opened up his segment of the rally with enthusiasm, and Mr. de Blasio—never shy about professing his love—said she pushed him to pass the best plan he could.

“Whenever I needed a little extra push or a little extra inspiration, it was right there in bed next to me,” Mr. de Blasio said, to a knowing “oohhhh” from the crowd. “I know this a family program, I didn’t mean to make it too racy there. The,” he began to move on, but then just couldn’t seem to help himself and added: “Just keeping it real, people.”

But the mayor saved the big guns for the end of the rally: HUD Secretary Julian Castro.

“Like anything, it’s not perfect. It required compromise. It required a coalition of folks,” Mr. Castro said of the plan. “But it is going to do good for the community. It’s going to make a world of difference.”

Perhaps Housing and Urban Development isn’t the sexiest department, or perhaps it was because the clock struck 6 p.m. as Mr. Castro took the stage, but many of the rally participants began to stream out during the remarks from the former San Antonio mayor, who is a rumored contender to be Hillary Clinton’s vice presidential candidate.

Mr. Castro said Mr. de Blasio is one of the mayors he talks with most often, typically about housing and typically because Mr. de Blasio was calling him. He said he’d urge cities around the country to follow New York’s lead and come up with local legislation to spur affordable housing development.

“My pledge at HUD is that we will be strong partners with you, to do what we can to meet you halfway, to fight for more resources, to be creative, to work with local communities,” Mr. Castro said, “so more seniors and more families have a great place to live in the greatest country on earth.” 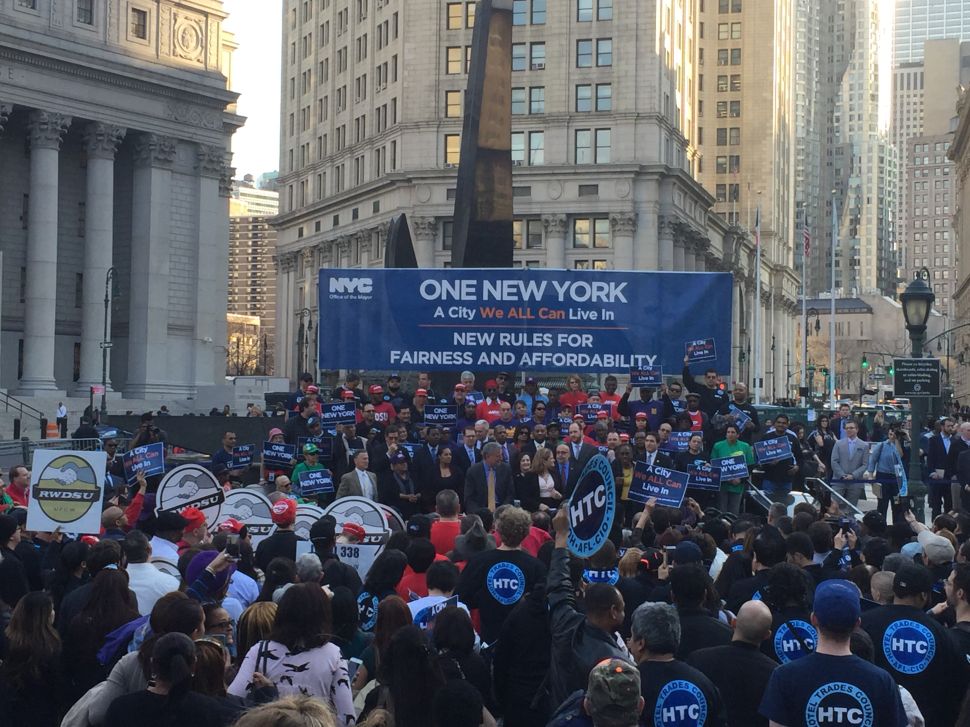