Over the next few weeks, Bernie Sanders will have to pull up a chair, pour a mug of Stumptown, and have the it’s-not-you-it’s-me conversation with his ‘bros, ‘bots, ‘berners and believers.

It’s going to be rough, in no small part because the short end of any campaign is a letdown, and also because this candidate inspires a well of personal allegiance and pride. Mr. Sanders’ supporters are beyond passionate, which can translate into the good: unwavering belief in their man and his message. And the not-good: some of the most intense vitriol I’ve ever seen in politics against his primary opponent, and a deep sense of paranoia that has veered into tinfoil hat territory. The first will remain absolutely crucial to a Democratic victory in November; the latter will, I hope be remembered as teachable moments—or distinct lapses in taste.

Either way, it’s time to wind down. Supporters are sure to cry foul and point to a bumper crop of wins over the last week or so. Job well done: but it’s not enough.

There doesn’t seem to be an understanding that this is bigger than them, bigger than their guy, and an actual audition for who will occupy the most powerful, complex job in a messy, scary world.

The reality is that any path forward for the gentleman from Vermont choked its last breath and expired on the border between Missouri and Illinois two weeks ago. That night, two states thought to be low hanging fruit went for Hillary Clinton—albeit by slim margins—while she won the two most important nouns in politics, delegate-rich Ohio and Florida—by a mile. Even taking the super delegates—that my buddies on the far left ignored in 2008 when they factored into the Obama win, and despised this year because the Sanders campaign has insinuated that they are indeed a plot out of a Dan Brown Opus Dei fantasy—out of the equation: Ms. Clinton is just too far ahead to take down. And now there are very few whitewashed caucus states left, which are largely the only localities in which he crushes it. And she’s roughly 280 pledged delegates over Sanders. That’s almost three times  ahead of where Barack Obama was at this time in 2008—on top of which, she’s outperforming Obama eight years after their primary with African American voters, who are, once again,  a cornerstone of the coalition in upcoming mega-states New York and Pennsylvania.

The two “m” words that matter most in a campaign, math and map, just aren’t on his side.

True, Mr. Sanders will do well a few states that vote in April, though not by the landslide that he needs. Farther out, polling looks solid for Ms. Clinton in the Keystone State. Mid-month, it’s all eyes on New York, where’s no question he will win the Park Slope Food Co-Op by numbers not seen since Johnson slaughtered Goldwater, but the rest of New York and its hundreds of delegates are looking good for their former Senator. All of which is to say, Mr. Sanders will have some very good days and opportunity for some well-deserved victory laps, and Hillary will have some bad ones in which her supporters will wring their hands. But, taken together, they’re not nearly enough to make him truly viable if you get off of U.S. Uncut and look at actual data.

Though the Democratic candidates have not been asked as many times and nearly as nervously (sometimes I think poor Reince Preibus falls asleep by screaming into a paper bag at night) if they will support one another should they lose, I take Mr. Sanders at his word that he will. For her part, Ms. Clinton didn’t hedge. My concern are Sanders supporters. They are far from unity mode and the Senator needs to get them there. That’s part of a candidate’s job. For them this all still seems to be a morality play, or a field project for Civics 101 at Hampshire. There doesn’t seem to be an understanding that this is bigger than them, and bigger than their guy, and an actual audition for who will occupy the most powerful, complex job in a messy, scary world in which money in politics isn’t the singular barrier between us, peace and prosperity.

The stakes have never been higher. There are two choices: unity or Trump.

In short, in Sanders-world, it doesn’t seem to matter who can stare down Vladimir Putin (two words: Claire Underwood).

I understand that blunt, bite-size, repeated messaging performs the best and penetrates the deepest. They also have been omissive to the point of irresponsibility in this cycle and, to my thinking, less than honest at times. He hasn’t looked beyond the fundamentals of preaching a single primary-focused message—or, over the last few weeks, taken into account that reality dictates an endgame and real necessity to marshall support for Ms. Clinton, as the general swings into action and Democrats, and those who support Democratic values, need to emerge victorious.

And if this wasn’t all a protest exercise in the first place, Mr. Sanders will start the transition now. He has ample money to stay in the race for the time being (although his bern rate is absolutely staggering per recently released data) and, again, there will be those good days. But the rest of his trip has to be a gradual pulling over to look for the exit ramp, and tell the kids they won’t, in the end, get to Wally World. It can be subtle at first, but it has to be genuine. After all, there’s precedence: witness how ably and convincingly Ms. Clinton did it in 2008. He should look to that model.

Worrisome data bears out that over one-third of Sanders voters when polled have said they will stay home if Bernie isn’t the nominee. The candidate himself needs to course-correct on this, and fast. There’s too much at stake. Mr. Sanders needs to make the case early, often and with carrots and sticks—plus with the force, passion and discipline that have made him such a strong contender, that this is unacceptable. He also has to emphasize that you aren’t a progressive, or a fighter, but an infant and a narcissist, if you spitefully stay home in your bathrobe on November 8 in an effort to “send a message.” If his campaign was about transcendent, transformative ideas and is indeed a movement, he must make the case to his supporters that at the end of the day it doesn’t matter whose torch they march under and remove ego from the equation. Hillary is the very closest they have and he needs to start dialing back the anti-Hillary rhetoric and campaign on his positives rather than casting aspersions on her record and character. It’s no longer helpful to the race writ large. With each passing day, he needs to emphasize that for his supporters to stamp their feet and play sour grapes is nothing short of willful, destructive sabotage and something he himself will not stand for.

It is mainly in Bernie Sanders’ hands what happens next. There’s no question that he has inspired millions of supporters and been an extraordinarily positive factor in the terms of race and what will be a winning Democratic platform: but the cold fact is, he is no longer in a position to clinch the nomination. Like Barack Obama before him, he’s spoken directly and newly engaged millions of young voters.   This is a wonderful thing. And if he really believes in progressive values, he needs to continue to engage, motive and inspire long after he exits the current phase of race and, as his current opponent did eight years ago, make sure his supporters fall in line and turn out. In turn, Hillary Clinton needs to be sure that she earns the confidence of his supporters to carry his message forward. That’s her responsibility. It’s not a one-way street.

The stakes have never been higher. There are two choices: unity or Trump. 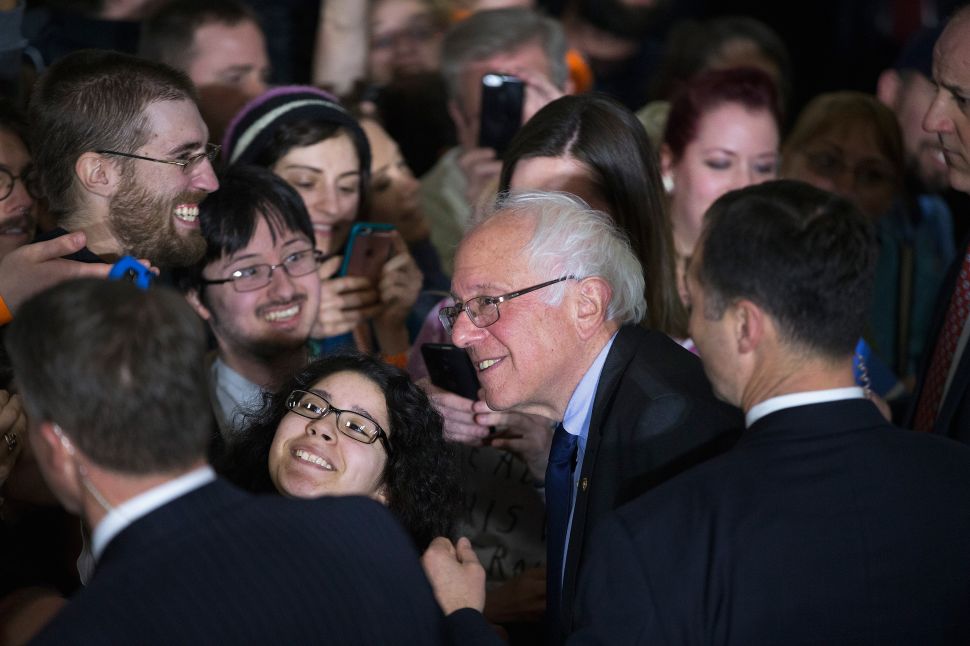