With blind ninjas, Kingpins of Crime, and Greek assassins in the mix you would think Marvel’s Daredevil wouldn’t have any room for a normal woman just trying to do the right thing. But through the first season of Netflix’s Marvel debut series, Karen Page (portrayed by Deborah Ann Woll) emerged as the perfect level-headed, strong-willed foil to the personalities of Matt Murdock and Foggy Nelson. And she’ll need to be–when we find her in Daredevil’s sophomore season it isn’t long before she comes face to face–to shotgun barrel–with Hell’s Kitchen’s newest vigilante, Frank Castle.

The morning after Daredevil premiered in New York City we spoke to Ms. Woll about Karen’s mental state, good vs. evil, and what Ms. Page would think of a certain super-strong private investigator down the road.

I heard that you don’t ever watch the work you do. Is that still true?

That is still true, and there are a lot of reasons. When I go home at the end of the day I know that’s the end of it, that I don’t have to stress how it’s going to be edited or whether or not it was any good. I think a piece of it is also insecurity. For me, I usually go home at the end of the day feeling excited, proud, and happy and I think back on it like “Oh that was so cool when I found that moment with Charlie [Cox].” And if I go back and watch it with my hyper-critical eye, I lose that.

Does not watching your work help keep Matt Murdock separate from Daredevil?

You know, that was sort of an interesting side effect. I didn’t do that on purpose. But I was getting so many questions that were like “How come Karen can’t figure out Matt is Daredevil?” And I realized, Karen has only seen Daredevil once. Maybe again in videos or on the newspaper, but because I personally only interact with Daredevil when Karen does, I knew that it was just that one time. And it was the same day she meets Matt, and these were not  two people she knew very well. So for me, I went “You know what? I 100 percent believe she wouldn’t put the two things together.” For as smart a woman she is, it’s not too big a leap. And I know that pretty objectively because my experience is as close to Karen as it can be.

“While all the other superheroes can fly, and kick, and punch, and throw lightning at people as their way of finding justice, Karen has to do it with her brains.”

What is Karen’s mental state when we find her in season two?

There is a six-month break between seasons which means some of the trauma from the end of the first season, she’s had time to process. She’s not fully in its grasp. It’ll never go away, we’ll definitely see lingering pieces of it. However, it’s a good place. We’ve rid Hell’s Kitchen of Wilson Fisk and for a short while it seems like things are sunny and we’re getting along. Even though the firm has been struggling a bit financially, we’re doing good work. We’re proud of the impact we’re having on the community.

I specifically remember my girlfriend standing and cheering when Karen killed Westley, which I think was the normal reaction. But how does that moment stick with Karen for you?

God, how does anyone deal with that? I think despite that she had to do it to save her life, it’s a shameful event. It’s something that revealed something about her that is potentially monstrous. And it may be a secret that she has to take to the grave, and if that’s true does that mean she ever truly be close with someone? That’s a terrifying thought. So in a lot of ways I see Karen in the beginning of the second season trying to overcompensate for that. Her mindset is: If I am afraid that I am a monster, that I am no different than Frank Castle, that I am capable of these terrible things, then I have to be even better. I have to fight even harder for people that can’t fight for themselves. I have to fix this system.

We’re all human beings. There are no monsters. There’s no pure evil, there is no pure good…despite what Frank Castle does he’s motivated by something, and has a story to tell”

How would you define Karen’s role in not just Daredevil but the entire MCU? She’s obviously not dressing up at night but she’s trying to fight the good fight.

I do think that truth and fairness matters to Karen in a very deep way. She’s not someone who is going to let something go. I mean Union Allied tried to kill her and frame her for murder. One of my favorite lines from last season is something like “I’m not just going to stick my head in the sand and let them get away with it because I’m scared.” That kind of tenacity is so impressive to me, and I greatly admire Karen for that and I like to bring that side of her out as much as I can. While all the other superheroes can fly and kick and punch and throw lightning at people as their way of finding justice, Karen has to do it with her brains, and she has to be three steps ahead of you.

It is a story, it isn’t meant to be ripped from the headlines. But we do have to remember we’re all human beings. There are no monsters. There’s no pure evil, there is no pure good. Despite what Frank Castle does–and you can brand him a lot of different ugly words–he’s motivated by something, and he has a story to tell. We’re only going to get to the bottom of that by listening to him. Not necessarily agreeing with him, not thinking what he does is right, but trying to understand him in some way.

Since Marvel has become this massive unstoppable thing, it has become about the crossovers. I’m interested in how you think Karen would get along with her Hell’s Kitchen neighbor Jessica Jones?

[laughs] Oh, I don’t know. I like to think that Karen is open minded, and would try and see the world through Jessica’s eyes. And I do think Jessica is also a champion for justice. It might come from a slightly different place than Karen’s does, but I think they would find a lot of common ground there. 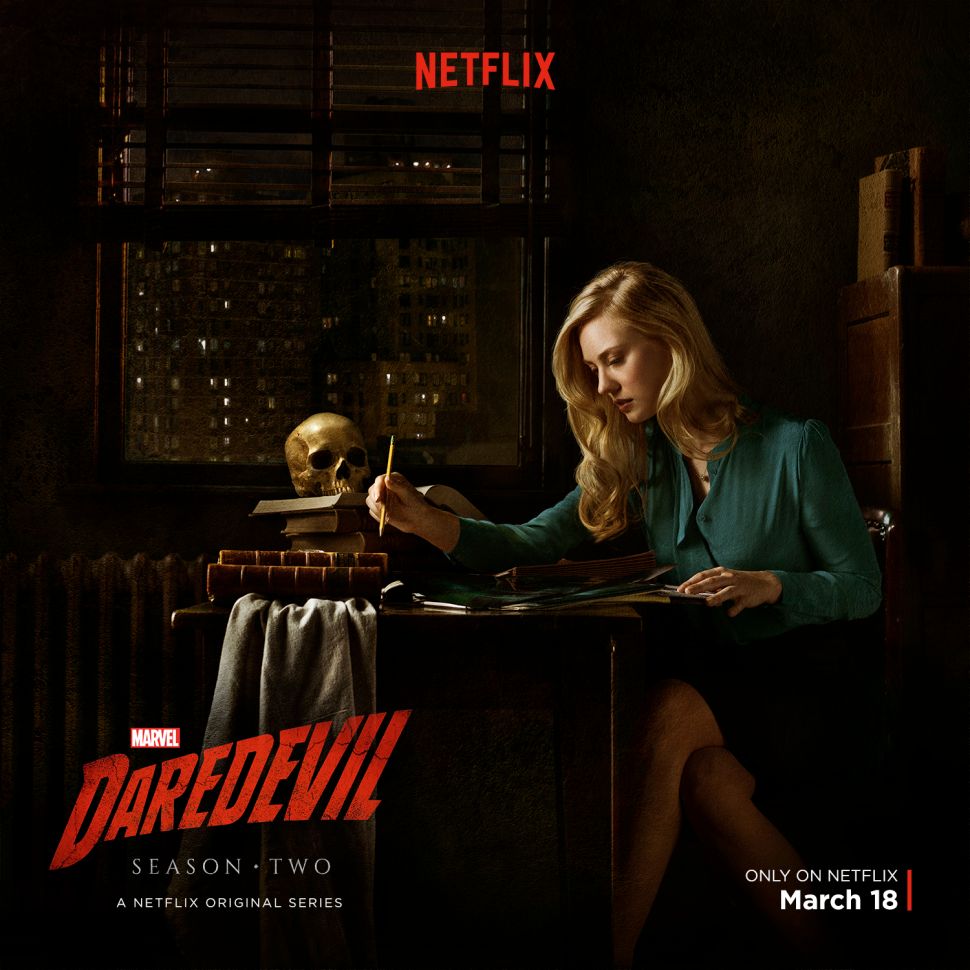