Dennis Ross does not tire easily. Just off the plane from an all night flight from the Middle East after three days of meetings in the region one recent Friday morning, he goes home to shower and change before going to visit his just-born grandchild, then dashes off to a series of media interviews before meeting privately with European officials interested in his take on Mideast peace. And that is before 2:00 in the afternoon.

There may be no one who knows more about American diplomacy in the Middle East over the past quarter-century than Dennis Ross. An academic specializing in Soviet decision-making, Mr. Ross went to work in the Reagan Administration as a National Security Council staffer, focusing on Near East and South Asian affairs. He became a protégé of Secretary of State James Baker during the presidency of George H.W. Bush, appointed by Mr. Baker to the high-powered job of Director of the State Department Policy Planning Staff. Despite his role as a foreign policy advisor to Mr. Bush in the latter’s 1992 reelection bid, Bill Clinton hired Mr. Ross as his point man on the Mideast.

Mr. Ross’ 2004 book The Missing Peace: The Inside Story of the Fight for Middle East Peace is an exhaustive account of the successes, near-successes and travails leading up to Yasser Arafat’s 2000 decision to reject an independent Palestinian state in favor of a suicide bombing campaign that would last until Arafat’s death. When Barack Obama took office in 2009, Ross returned to the White House, serving for two years as special assistant to the President and another year as a special advisor to Secretary of State Hillary Clinton before returning to the Washington Institute for Near East Peace, a prominent capital think tank.

‘At times I’ve been the target of criticism, but you live with it.’

The Institute’s website describes Ross as “in residence” as a Distinguished Fellow. Distinguished he may be, but “in residence” he most certainly seems not to be. A youthful looking 66, Mr. Ross is peripatetic, hustling from speaking engagement to speaking engagement, lecturing on campuses and before policy groups, discreetly providing advice to presidential candidates when asked and churning out op eds. All of this is sandwiched between stops on a book tour that has had him criss-crossing the country since October, promoting his new book Doomed to Succeed: The US-Israel Relationship from Truman to Obama.

The mild-mannered Mr. Ross travels with a bulls-eye on his back, placed there by partisans on the edges of both sides of the Israeli-Palestinian conflict. The Israel-haters would sorely love to take him out of commission: his credibility is so high and his personal knowledge and experience so deep that he is able to dispatch anti-Israel tripe with barely any effort, and the years he has devoted to trying to bring about peace make him exceedingly difficult for pro-Palestinian polemicists to challenge. For some on the hard right, Mr. Ross’ constant poking, prodding and searching for a way to entice the Palestinians to make peace is tantamount to betrayal of Israel, stimulating fierce attacks on Ross that can seem unhinged.

Asked what it feels like to be the object of anger much of the time, Mr. Ross matter-of-factly recalls telling his children when they were young that everything worth doing by definition means making some people unhappy. “I have always felt that it goes with the territory,” he says. “I know that these issues, looking at the sweep of history, take on an emotional character. At times I’ve been the target of criticism, but you live with it.”

The man is in no one’s pocket—which drives some people crazy. He is impossible to pigeonhole and this imbues him, along with his singularly significant personal experience, with immense stature both as a commentator and as a diplomat—a profession he continues to practice, albeit in a semi-private capacity. Thus, while his respect for President Obama’s intellect and intentions is evident, Mr. Ross is plainspoken about his disagreements with the Obama Administration’s attitudes toward the Mideast—disagreements that resulted in some long knives being unsheathed against him even while he was still in it.

‘The Palestinians need to believe that Israel is not going to take the whole thing.’

Asked whether the Obama team ever acknowledged, even privately, that by giving the Palestinians a bye and hectoring Israel they had erred badly, Mr. Ross says no. “There’s such an angst about Netanyahu that that is where they keep their focus. Why they’re not frustrated with their dealings with Abu Mazen I don’t know,” he says, using the name popularly used for Abbas. “They put the onus on Israel, on Bibi. The premise is that Israel is strong, the Palestinians are weak. This has been the ethos of the Administration.”

But Mr. Ross is careful not to allocate the blame to one locale only. “It takes two to create this relationship,” he says. He attributes much of the unhealthiness of the relationship between the White House and the Prime Minister’s Office to the Iran nuclear deal. “The President regarded it as his most important foreign policy initiative. The Prime Minister regarded it as an existentialist moment.”

Mr. Ross monitors the 5 month-old Palestinian stabbing campaign playing out on Israeli streets carefully. “The character of it has been extremely violent. Eighty percent of the stabbings are by people under the age of 20. The Palestinian public is not enjoying it. But even if they’re not enjoying it, they’re not criticizing it.” Mr. Ross has little patience for Abbas, noting that while he is crafty enough to make noises about opposing violence, “he’s still referring to [the stabbers] as martyrs.”

Asked about whether he regards it as a foregone conclusion that Iran will be able to deploy nuclear weapons after the 15-year period established by the nuclear agreement for foreswearing nuclear weapons is over, he replies: “A lot depends on what we do during the next 15 years to reinforce the consequences to Iran [of nuclearizing]. We need for the next administration to be very clear with Iran. I would say bluntly ‘If at any point you seek nuclear weapons, we will act militarily to take out your nuclear infrastructure.” And he would back up clear declarations of policy by transferring mega-bombs known as Massive Ordnance Penetrators—“mountain busters, not bunker busters,”—to the Israelis, so that the Iranians have no doubt that someone will use them in the event they seek to deploy nuclear weapons.

Though he is critical of the Palestinians, Mr. Ross is worried that Israel is missing important opportunities that cannot easily be recreated to serve notice to Palestinians and the world that its settlement policy is consistent with a two-state solution. He wants Israel to commit to a policy of permitting new housing units only in the areas slated to be part of Israel in the event a peace deal is reached, meaning the major settlement blocs that both parties privately acknowledge will be part of Israel if an agreement is ever reached. He is convinced that an Israeli announcement of clear limitations on settlement building that can be defended as consistent with a two state solution will help defuse the Boycott, Divestment and Sanctions movement that is based on the argument that Israel opposes such a solution, and will give desperately-needed hope to Palestinians who see no independent state in their future. “The Palestinians need to believe that Israel is not going to take the whole thing,” says Ross, saying that a bold step by the Netanyahu government will help “take away the ammunition” being used by Israel’s enemies against it.

Mr. Ross is under no illusions that a rational solution will take hold anytime soon, and he is in a position to know. But he hurtles on from meeting to consultation, nevertheless, writing books and articles, offering up his own experiences, calling Mideast-related balls and strikes as he sees them, and refusing, always, to concede that respect and good humor can’t make a difference in bringing the perpetually ugly conflict to a close if he and others like him will just apply themselves to it energetically enough. 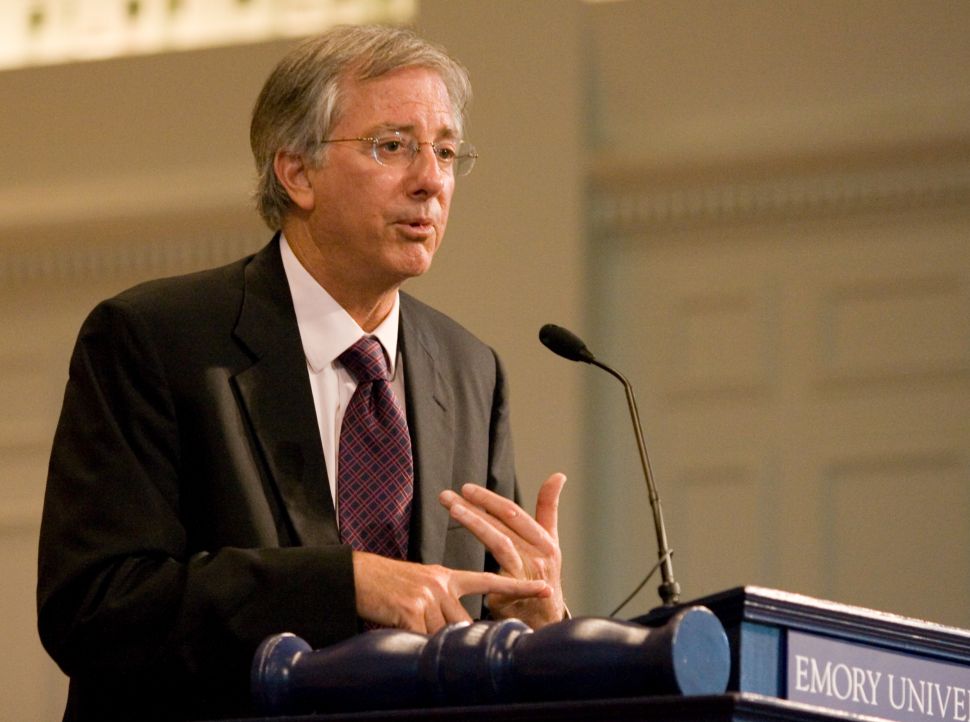