Parts of this week’s Sunday shows were filled with a recap of last week’s low-down trash talk about wives of Republican presidential candidates Donald Trump and Ted Cruz.

But the terrorism in Brussels on Tuesday also forced everyone to pay attention to a more serious side of the news.

Some of it could be seen midway through NBC’s Meet the Press when Chuck Todd presented images of two distinct groups gathered at the public square where mourners left candles and flowers for the 28 people massacred by ISIS bombs at an airport and on a train last Tuesday.

“It’s incredible how quickly the mood here changed, Jake,” Ms. Ward said from Brussels. “About half an hour ago, it was a quiet, reverent scene. People were passing through the square, lighting candles, laying flowers, remembering the dead… And suddenly, what we essentially saw was a march, a far right-wing fringe group associated with football or soccer hooligans, who marched, a few hundred of them, chanting very loudly and very aggressive, anti-immigrant chants.”

Translating the anti-immigrant words, she added that they were saying, essentially “This is our home.”

She said she could also hear counter-chants from the mourners saying “We are all the sons of immigrants.” Between the two groups, you could see two police lines keeping the two sides apart on different sides of the flowers and candles that filled the street. Some protestors used Nazi salutes.

It seemed like the beginning of a serious backlash in Europe. What can a U.S. president do? On Face the Nation on CBS, Jeffery Goldberg described with foreboding the foreign policy discussions that Mr. Trump, the leading Republican presidential candidate, expressed in sit-down interviews with the editorial boards of The New York Times and The Washington Post.

‘He reacts to the smallest slight with the hair-trigger wounded ego of a male flight attendant.’

Later, Mr. Todd played a telling clip from Mr. Trump’s interview with The Post. A voice on the tape suggested a serious subject.

“This was about ISIS,” the voice said to Mr. Trump. “You would not use a tactical nuclear weapon against ISIS?

Mr. Trump responded: “By the way, can I do something? This is a very good-looking group of people here. Could I just go around so I can know who the hell I’m talking to?”

Somehow, they never got back to Mr. Trump’s recent musing about those weapons of mass destruction that, he hinted, could be of use against the terrorists who occupy some territory in Iraq and war-torn Syria.

Mr. Trump made only one live appearance on the Sunday shows, again on ABC’s This Week, hosted Sunday by Jonathan Karl. He phoned it in, a procedure other networks are trying to avoid. Referring to his back-and-forth with Mr. Cruz regarding their wives, Mr. Trump said “He started it. I didn’t start it.”

Mr. Trump referred to a nude picture in an ad put on the internet recently by an anti-Trump super PAC. Although Mr. Cruz said he played no part in it and had no control of the group, Mr. Trump got even by re-tweeting a two-picture combo of his wife, looking glamorous, and Mr. Cruz’s wife, looking haggard.

On CNN’s Reliable Sources, Nancy Gibbs of Time Magazine tried to make sense of the Trump phenomenon in a conversation with host Brian Stelter. He spoke of the failure of the media to recognize Mr. Trump as a legitimate candidate and not just a gadfly.

“Seldom have so many people been so wrong so consistently about so much,” she said. “When you see a party have a civil war in front of our eyes, it’s just a remarkable thing.”

Some of the most caustic commentary came before this, on Friday night, when Bill Maher took up the topic on his HBO show Real Time. Mr. Maher imagined what Mr. Trump would do as President.

“If anybody f-ed with Belgium on his watch, they would get a very serious tweet about how ugly their wife is,” Mr. Maher said.

Then he showed a clip of Mr. Cruz—the Republican senator from Texas—discussing Mr. Trump

“Let me be clear,” Mr. Cruz said. “Donald Trump may be a rat, but I have no desire to copulate with him.”

Mr. Maher responded with a puzzled expression on his face. One of his guests—former Michigan governor Jennifer Granholm—picked up the theme of Mr. Trump’s insults to both women and Muslims.

“Words matter,” she said, “and insulting a whole swatch of people that come from 50 different countries and represent a billion and a half people is not a great idea.”

Regarding the right wing insistence that the terrorists be labeled “Radical Muslim Extremists,” Ms. Granholm tried to explain how law-abiding American Muslims don’t like to be blended in with the terrorists because they share the same religion.

She referred to the Muslim population of Dearborn, Michigan.

“If you alienate people who we need to be our allies, then we end up endangering the United States,” she said. “That man is such a loose cannon he is a danger to this country.”

Mr. Maher remarked on the finalists of the Republican chase for the nomination.

“With 17 candidates,” he said, “somehow you wound up with Mussolini and Joe McCarthy.”

“Donald Trump is the most thin-skinned person in human history,” Mr. Maher said. “And he reacts to the smallest slight with the hair-trigger wounded ego of a male flight attendant.”

On the other hand, he said, “Ted Cruz is immune insult because he’s learned to live in a world where everyone, everywhere has always hated him.”

Mr. Cruz, on Fox News Sunday, discussed Mr. Trump who, he said, attacks people personally when he is scared. He blamed Mr. Trump for the story in the National Enquirer that suggested Mr. Cruz has had five extra-marital affairs.

“The story is garbage,” Mr. Cruz said. “It is a tabloid smear.” Mr. Cruz noted the story quoted Roger Stone, who he called “the henchman, the hatchet man, for Donald Trump.”

When asked whether he condemned the Enquirer story, Mr. Trump—whose close friend runs that paper—replied: “I don’t care and I mean really. I don’t care… don’t forget, I call him ‘Lyin’ Ted.’”

When pressed by substitute host Jonathan Karl to elaborate about what he meant by his threat to “spill the beans” about Ms. Cruz, Mr. Trump responded with innuendo. 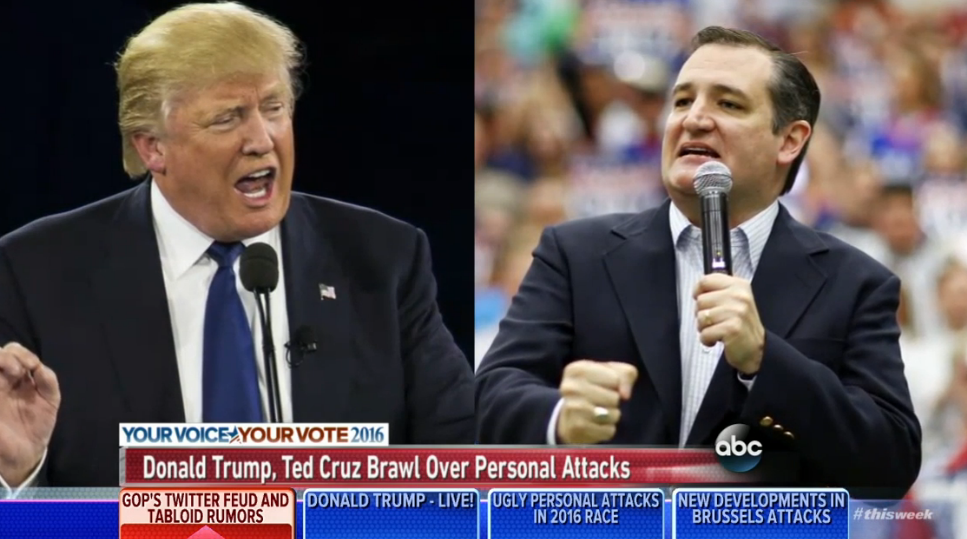