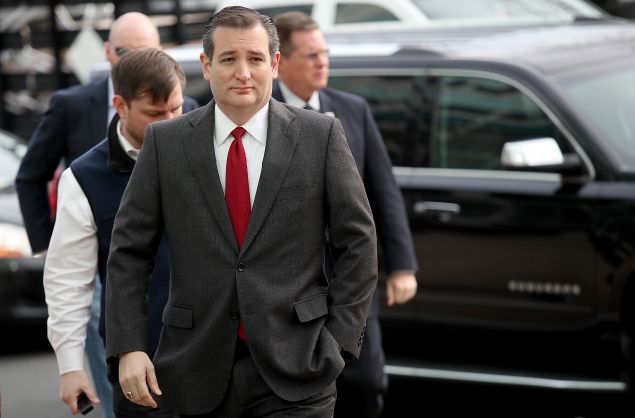 Ted Cruz thinks New York State will be a friendly place for a very conservative Texan.

“Let me tell you, New York is going to be a battleground,” the senator said in Midtown today. “It’s been a long time since the State of New York had a voice nationally in selecting the nominee.”

He’s somewhat right. With only Mr. Cruz, Ohio Gov. John Kasich and Donald Trump rumbling toward the April 19 New York primary, the Empire State’s 95 delegates may make the difference between the most divisive and incendiary front-runner in recent political history capturing the Republican nomination outright or a fight on the convention floor in Cleveland this summer. Mr. Trump, a billionaire real estate developer who was born in Queens and lives in Manhattan, was New York’s mercurial celebrity for decades before he erupted on the national stage. All polling suggests Mr. Trump will dominate here: a March 7 Siena College poll had him leading Mr. Kasich and Mr. Cruz by 27 and 34 points respectively.

Mr. Cruz, as canny a political operator as there may be in this race, still sees an opportunity. “We are competing hard in the State of New York,” he told the admirers assembled in the upstairs “salon” room at the Women’s National Republican Club. “I gotta say, I think we have an inherent advantage because the people of New York know Donald Trump.”

He’s correct there. Mr. Trump is not viewed very favorably by New York voters as a whole, but otherwise toxic ratings have not stopped the billionaire from winning decisively across the country. He has proven popular with Republican primary voters in the deep South and liberal New England alike, and the large number of northeastern states that vote over the next couple of months are expected to lend Mr. Trump a further advantage in the race for a majority of delegates.

New York has not mattered at all in recent decades because the state invariably votes late in the primary season. The 2016 presidential race, unprecedented in just about every way, promises an actual fight to the finish, and all three Republicans have an incentive to campaign here. Mr. Kasich’s only hope of being a factor at a contested convention is picking up delegates in moderate northeastern counties and Mr. Cruz has proven adept at micro-targeting supporters in otherwise hostile territory, finishing ahead of more establishment-friendly candidates in states like Michigan and New Hampshire.

New York rewards its delegates proportionally, though Mr. Trump has a chance to walk away with the vast majority of them. If a candidate clears 50 percent in each congressional district, he gets all the delegates, and Mr. Trump has the potential to dominate everywhere. (There are also at large delegates not tied to districts.) New York City and its suburbs, along with more conservative quarters in the northern and western chunks of the states, may all be friendly to Mr. Trump. Unlike Mr. Cruz and Mr. Kasich, he has New York surrogates in fellow billionaire Carl Paladino, a Buffalo developer, and Buffalo Congressman Chris Collins. New York City Councilman Joseph Borelli also endorsed Mr. Trump, and Ed Cox, the chairman of the State Party, has spoken warmly about his candidacy.

New York presents an awkward tableau for Mr. Cruz. He entered the posh Republican club to his usual country music soundtrack. He once assailed Mr. Trump for representing those “New York values,” but immediately declared today that God should bless “the great state of New York.”

He tried out his New York pitch today: lacerating powerful Democrats unpopular with conservatives across the state. At the top of the list was Mayor Bill de Blasio, a proud liberal, who has ripped into Mr. Cruz for his comments about increasing surveillance on Muslims and implications that the state as a whole has overly liberal, and therefore decadent, “values.”

“I’ve gotta say, if Mayor de Blasio ever holds a press conference saying ‘I agree with Ted,’ that’ll be the instant I hang it all up and realize I’ve gone terribly, terribly wrong,” Mr. Cruz quipped.

He blasted Mr. Trump for his decades of donating to the state’s most powerful Democrats, including Gov. Andrew Cuomo. “Y’all have seen firsthand the disasters that come from liberal Democratic polices that are foisted on the people of New York. And yet Donald Trump, over and over again, has been supporting Andrew Cuomo and Hillary Clinton and Anthony Weiner and Eliot Spitzer and Charlie Rangel.”

“So the next time you think of all the disastrous policies that have been foisted on the people of New York, you can thank Donald Trump for bankrolling those efforts,” he added. (For what it’s worth, Mr. Trump has certainly used Mr. de Blasio as punching bag, too.)

New York Republicans aren’t as deeply religious as Mr. Cruz would hope, though he will likely target the state’s growing Orthodox Jewish population. David Storobin, a former Brooklyn state senator who won his lone race with the support of very conservative Jews and Russian-Americans, is backing Mr. Cruz and attended his speech today. Mr. Cruz’s unapologetic defense of Israel and his belief that religious Christians and Jews are under assault in a politically correct America may resonate with these communities.

Mr. Cruz attacked Mr. Trump for referring to “Palestine” during his speech to the American Israel Public Affairs Committee on Monday—supporters of Israel see the term as an invalidation of the Jewish State—and chided him for declaring he wanted to withdraw American forces from NATO. 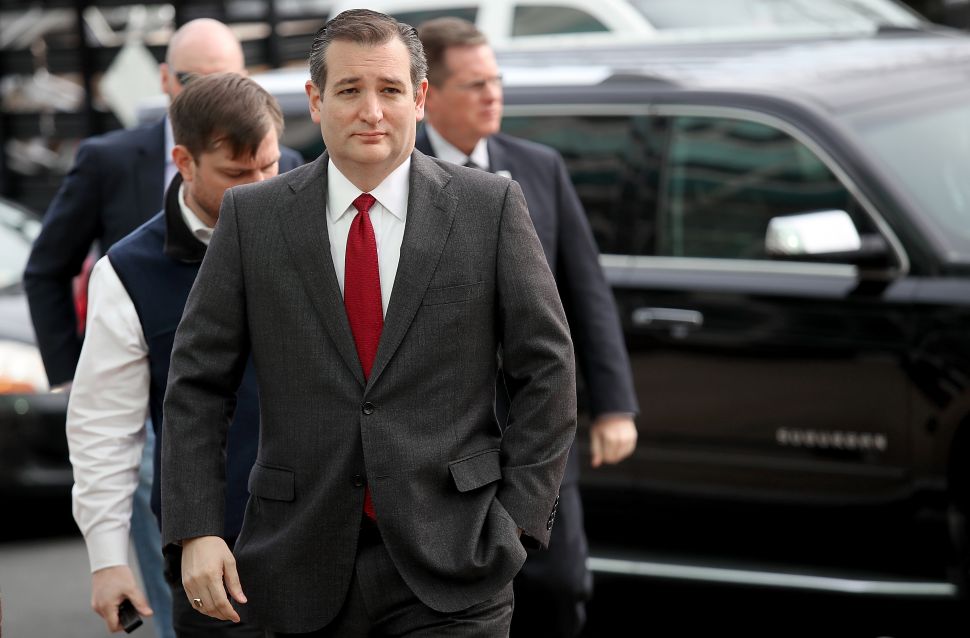