Donald Trump can be a confounding presidential candidate. He routinely insults minorities, ridicules the media and stretches the truth. He often changes his positions on a wide array of issues; if there is an actual Tao of Trump, it’s that Donald J. Trump always knows best.

This was exemplified again during another whirlwind day on the campaign trail, where Mr. Trump touched down in Washington, D.C. to speak at the American Israel Public Affair Committee’s confab. Mr. Trump, the headliner of the day, was out to prove that he supported Israel more than any of his rivals, including Hillary Clinton, the Democratic front-runner. In February, the billionaire real estate developer found himself in hot for understatement rather than bombast: he said he would be “neutral” in the Israel-Palestinian struggle to better negotiate a peace deal. The Israel hawks who for the most part rule the political establishment raised their eyebrows as high as they could go.

There are multiple Trumps, as Mr. Trump, the GOP front-runner, himself has said. There’s the mercurial strongman who wants to “bomb the shit” out of the Islamic State and kill all their families. There’s the candidate who sounds almost Noam Chomsky-ish on foreign affairs, deriding NATO as a waste of money and the Iraq War as a grand folly. Today’s Mr. Trump, speaking in front of AIPAC, was something of a hybrid, though he leaned toward a more reformed version of the former. He used a teleprompter, a Trump rarity, and promised America would be an aggressive, unequivocal defender of Israel, to the delight of the AIPAC crowd.

“When I become president, the days of treating Israel like a second-class citizen will end on day one,” Mr. Trump said, sounding more and more like a conventional presidential candidate.

He told reporters earlier today that he consulted his son-in-law, Jared Kushner, for advice on the speech. (Mr. Kushner, an Orthodox Jew, is also the publisher of the Observer.) And the speech mostly read like what a typical Republican or Democrat in the political mainstream would say about Israel and the Middle East. Mr. Trump repeatedly attacked Iran and the United Nations, which has reprimanded Israel for its treatment of the Palestinians, and again blasted the Obama administration’s Iran nuclear agreement. He pledged to move the U.S. embassy to Jerusalem, a top priority for Israel supporters in America.

“You see, what President Obama gets wrong about deal making is that he constantly applies pressure to our friends and rewards our enemies,” Mr. Trump said. “That pattern, practiced by the president and his administration, including former secretary of state, Hillary Clinton, has repeated itself over and over and has done nothing but embolden those who hate America.”

Mr. Trump claimed that he didn’t come to AIPAC “to pander” to them about Israel, though he told the gathering exactly what they wanted to hear. He didn’t sound a whole lot different than House Speaker Paul Ryan, the previous speaker, with the exception of his need to brag about his best-selling book The Art of the Deal and his skills as a negotiator. He implied, a bit strangely, that serving as the grand marshal of the 2004 Salute to Israel parade in New York City somehow put him in the line of fire because the country was at war with Gaza.

“It was a very dangerous time for Israel and frankly for anyone supporting Israel, many people turned down this honor. I did not, I took the risk,” he said.

Israel, Mr. Trump is asserted, is always “willing to deal” to reach a peace. 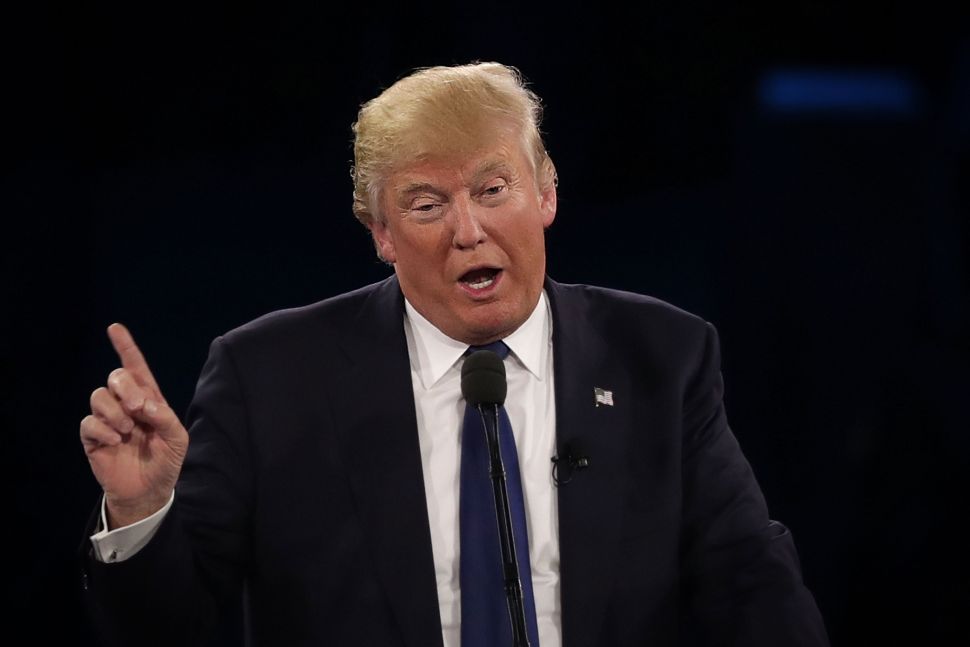