PALM BEACH, Fla.—“Please take your seats so the program can begin.”

The voice, a WWE baritone, rolled in over the PA system, and the crowd tittering in Donald Trump’s Mar-a-Lago mostly obeyed. Mr. Trump, who had been declared the winner of Florida’s Republican primary more than an hour earlier, strode onto the stage for his usual performance last night. America makes terrible trade deals. He was going to unify the Republican Party. A lot of reporters are disgusting.

Even if Mr. Trump doesn’t end up winning as much as he says—and make no mistake, he is still on track to become the Republican nominee—he has, as of March 16, 2016, carved his initials into the balky tree trunk of the body politic. Blocking him at the national convention, as some Republicans hope, will only feed the fury behind his movement, which amounts to perhaps the last, long bloody yowl of anti-cosmopolitan white America.

Mr. Trump’s following spans geography and even income brackets. There is no longer a way to silence, ignore, or contain him. There won’t be an opportunity after November, even if Mr. Trump is unelectable, because his movement thrives on rancor. If President Clinton (or, just maybe, President Sanders) seeks to reform the immigration system, expand the social safety net or speak more directly about race than first-term President Obama ever did, Mr. Trump and his followers will only have another White House to degrade and delegitimatize, their rage given shape in a Democratic shadow. Hillary Clinton, already less likeable than President Obama, will make a fine bogeywoman, as would an avowed democratic socialist.

The progressive wave buoying Mr. Sanders has a better chance of fading from view than Mr. Trump’s movement; liberalism lacks the titanic rage and resentment of his hodgepodge conservatism, or whatever you want to call Trumpism, and can’t discombobulate the political system in the same way. The Democratic Party can always tilt further left and co-opt it, adopting the independent-in-name-only Bernie Sanders as their great statesman, and everyone can go home happy. It’s true that Occupy Wall Street left a permanent imprint on the rhetoric of the Democratic Party and presaged the rise of Mr. Sanders and Sen. Elizabeth Warren. It’s also true that angry older whites are much more dependable voters than white millennials, and have much more of a reason to keep feeding the Trumpian movement with unabated anger and fear.

What will get better for them? Globalization is permanent; the factory towns are what they are. Coal will never be a good investment again. A recession is more likely than another boom—there’s growing evidence, as economist Robert J. Gordon has argued, that the sudden technological revolutions of earlier eras which brought us electricity, pharmaceuticals, the automobile and indoor plumbing—surges of economic output that genuinely lifted a lot of boats—will not happen again.

Ms. Clinton talked Sunday night about how “dangerous” a Donald Trump presidency will be. But the danger is already here. In 2011, Mr. Trump was the ringmaster of the Birther movement; in 2017, assuming he fails in November, he will remain the king of something much bigger. “Nativism and resentment have a dangerous momentum of their own,” the author Marilynne Robinson noted.

How Mr. Trump got here is up for debate. Was it racism festering during the Obama years, as Jamelle Bouie recently argued in Slate? Was it a frail Republican establishment ripe for a putsch? Was it the result of political elites in both parties failing miserably to make the lives of the working class any better? All are theories with merit. Almost any outcome this fall, outside of maybe a McGovernesque landslide, is good for Mr. Trump. A loss feeds his supporters’ sense of grievance and fortifies the worldview Mr. Trump has ably cultivated: the fix is in, things are getting worse, and you know exactly who to blame. A win makes him president.

Will Mr. Trump “tear the country apart,” as John Cassidy of the New Yorker warned? America weathered the rise of the Know Nothings, Father Coughlin and George Wallace. Today is a lot closer to 1968 than 1861, and the United States survived both. The better question is what America will look like as the home of a permanent Trumpian opposition. Does the Republican Party grow to resemble the National Front in France? Mr. Trump may well be the most famous person in America right now, a Marine Le Pen with a YouTube reel of his movie and television cameos. The efficacy of the Trump opposition is predicated on the strongman himself, and will have power and influence as long as he remains a celebrity, which he will be until the day he dies. The left, and even the Tea Party, requires tuned-in foot soldiers and fervid donors, a MoveOn.org and Working Families Party on steroids to rival the whims of the Koch Brothers, Robert Mercer, Sheldon Adelson and all the rest. Trumpism requires none of that. Just the man himself and cable television.

Mr. Trump will have the power to harass, cajole and intimidate the next president, no matter how much the GOP tries to snuff him out, and losing in November will not mean he won’t just run again in four years—because why pass up another day at the circus? The latent authoritarians in the electorate who Mr. Trump is energizing will hunger for more of him or someone just like him. Other politicians, sensing that this blend of xenophobic populism is a winner, may try to ape the script. Just as we saw the Tea Party nurture a generation of Republicans dedicated to invalidating expansive government, the near future could yield Republicans who are okay with bolstering social security as long as illegal immigrants don’t get a slice of the pie. Pat Buchanan and Rick Santorum lacked the charisma to turn these people into a political force. Mr. Trump obviously doesn’t.

The American system is bipolar in every sense of the word. Just eight years ago, an overtly cerebral black man with Spockian tendencies was allowed to become president. Now, his antithesis—white, loud, colossally mercurial—threatens to do the same. President Obama’s ruminative interview in The Atlantic, hitting newsstands just before Mr. Trump won Florida, was emblematic of a Weltanschauung the Trumpians hope to smash to pieces. Even accounting for his anti-European and isolationist tendencies, Mr. Trump promises to be an action president, the unpredictable enzyme radically acting upon history. Doing stuff, good or bad, will trump restraint. He doesn’t like the Iraq War, but he is ready to grow the military. Few countries (Putin’s Russia?) on any continent look like likely Trump allies. President Obama, perceived by his critics as feckless, is insecure about overreacting; overreaction is Mr. Trump’s default.

You could argue both men’s candidacies were aspirational in their own ways. Mr. Obama promised hope and change. Mr. Trump wants to make America great again. The difference is that Mr. Trump implicitly looks backwards. America has fallen, and will rise again, if only he can take the helm and will it back to paradise, whenever that was. Always short on specifics, Mr. Trump hasn’t quite told us.

Democrats are confident that demography is destiny. A majority minority nation will hand them the permanent majority, especially since all the kids today seem a little more liberal. This may all be true. Regardless, it plays into the Trumpian opposition’s hand: anxiety and discomfort with this idea are the fuel, and a highly renewable resource. A racial realignment, combined with the economic headwinds battering the nation, are having radical consequences for our political system.

The program is just beginning. 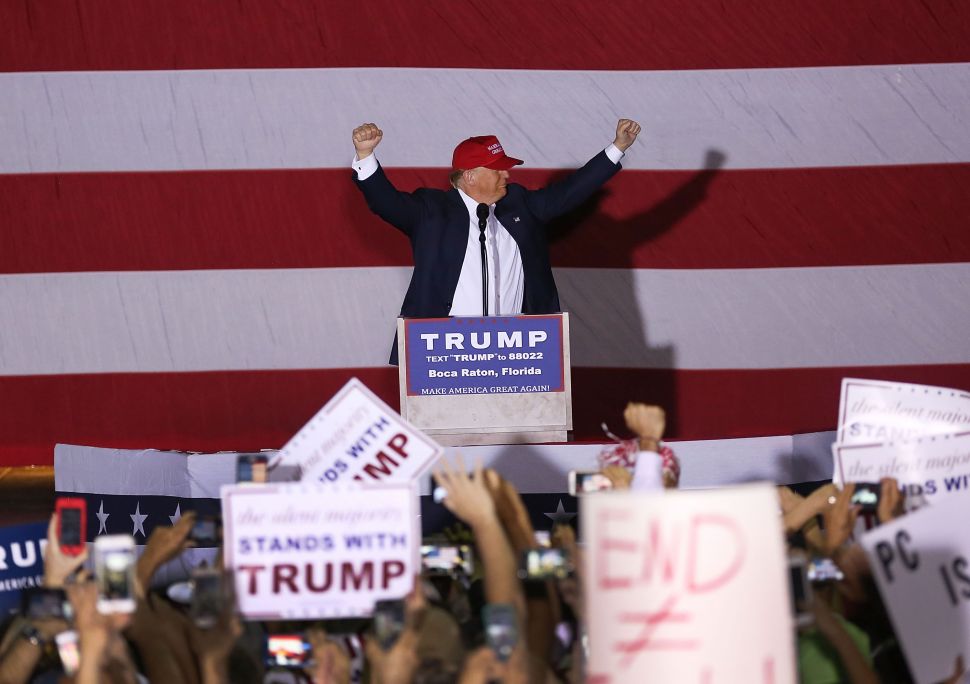