Feeling bad about #OscarsSoWhite? Help close gaps in racial disparities the next time you hang out with your friends with the brand new iOS app, EquiTable, which “solves the problem of splitting dinner bills and economic discrimination based on gender and race, all in one,” according to its page in the Apple Store.

The app takes the total bill from a given night out, then splits it up based, not on who ordered what, but on historic discrepancies in wages due to race and gender. Its new commercial just went live on YouTube today.

It's here! @EquiTableApp is real. Watch the commercial https://t.co/JUzSgvJ4Ov then download some equality today. https://t.co/kr0QexmbXl

Formerly called “EquiPay,” EquiTable‘s Chief Equality Officer, Luna Malbroux explained the app during the Comedy Hack Day demo at the San Francisco hackathon where it won the grand prize in January. “You may be wondering, ‘How does EquiPay come up with these calculations?’ Well friends, we’ve come up with a really complex calculation that takes into account history… just history,” she said. “We call it, ‘affirmative fractions.'”

Here’s the full demo (worth watching):

The Observer previously reported on New York City’s Comedy Hack Day, where Nat Towsen and company won for their app, Got This Thing, which guarantees you always have an excuse.

Comedy Hack Day is a project of the Cultivated Wit, which proposed crowdfunding a wall to protect San Francisco from Burning Man. 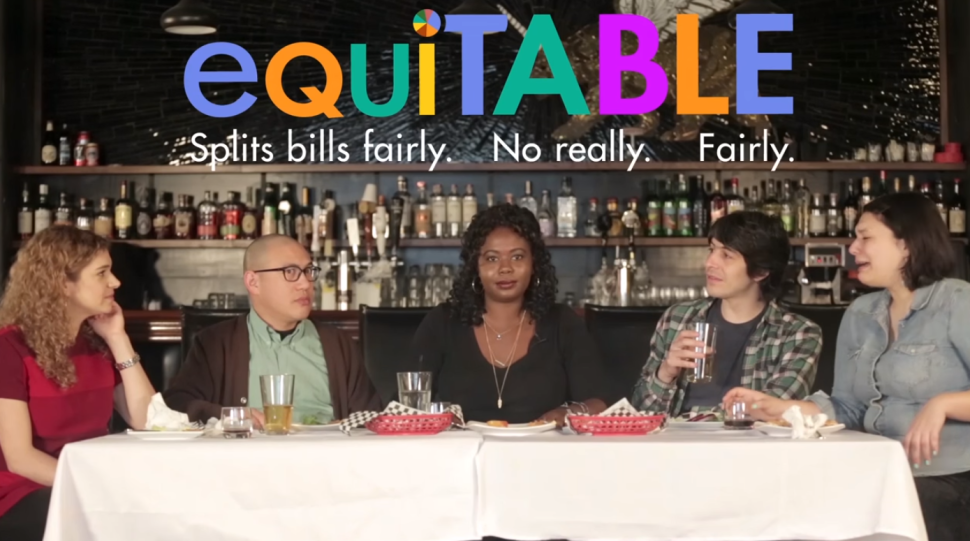